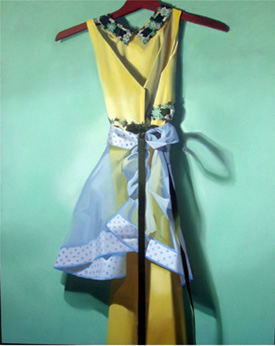 Despite their apparently simple compositions, Lindsay Frei’s new series of paintings, Alterations, are anything but simple, and raise many pertinent questions — most poignantly, issues involving the nature of human identity and individuality. The Helper artist’s inspiration for these works stem from her discovery of an abandoned suitcase of old clothing. The garments in the suitcase sparked the artist’s interest: what were they, where did they come from, who had worn them? These questions culminated in the garments’ use as the subjects of Frei’s exhibition Alterations, currently on display at Art Access Gallery through April 13. For this show, Frei painted some of the garments independent of a model, but most paintings illustrate the clothing as worn by the artist’s friends. And some of the actual clothes are installed on dress forms throughout the gallery.Compositionally, Frei’s paintings are minimal and beautifully rendered; the garment itself, or a sitter wearing the garment, is portrayed against a monochrome background. In Frei’s use of light upon the sitter and the garment, and in her measured painterly effects, she imbues each work with a stark realism that leaves no doubt that these paintings are of the here and now. The works with figures, each of which has a distinct emotion and character, may be considered portraits. But the charm of this exhibition is that the paintings without a figure have qualities — considering the nature and context of the work and the manner in which Frei has portrayed them — that also lend a portrait-like quality. This idea is bound in the exhibition’s theme: the items were once worn by an unknown individual, at an unknown time, and Frei has given new life to these items and they, in this context, bear an identity of their own.

Because of the mystery of these paintings– the portrayed garments’ significance as beings in and of themselves — the viewer is challenged to consider various issues on the relevance of these garments and their relationship to the wearer. One might ask, in their autonomy do the sitters wear clothing or do the clothes wear them? Although clothing is commonly considered merely a basic human need, much like water or shelter, these items of clothing seem to dominate the painting rather than the model wearing them. Yet each sitter seems so at home, so natural in these clothes. The old garment suits them and they are at ease in their own space.

In a society such as ours, or others throughout many centuries, clothing has transformed from the primal need to warm and protect to become a symbol of how we live. In the day of Prada, Gucci and Burberry, more and more emphasis is placed upon where and how one fits into society by the way one dresses. An immense value is placed upon clothing, as an identifier of power, wealth, position and status in society. It can be a source of vanity and pride. On the other extreme, it can represent poverty and destitution.

Frei’s use of reusing, her reconstituting the discarded, brings the concept of clothing into a new context. With the autonomy of the garments used in the exhibit, and what we understand about how clothing functions in society, one begins to question the nature of clothing in regards to our very sense of identity and individuality. The identity of the original wearer is questioned and in placing the old clothing with a new wearer, one sees a new individuality emerge. In this new synthesis, the element of the nature of clothing and the power it has becomes apparent.

Frei’s examination of garments, as objects and as dressing, places her in a long art historical tradition. In Western art, clothing has always been an important tool for artists to indicate character and status and carry meaning. In religious painting, the color of clothing was used to identify important characters (“Madonna blue” for the Virgin, and white for Christ). In Northern Europe, before artists began to focus on the emotional qualities of the sitter, the artist painted clothing in excruciating detail to reveal the status of the sitter. In Ancient Greece and Rome, as well as the Italian Renaissance, the lack of clothing was equally important and revealed the natural beauty of the human form. However, these pursuits were concerned less with individuality and more with identity to designate a Venus or a Diana and such was a generalized iconography.

Modern artists, such as Lucian Freud and Eric Fischl, surpassed the aim of naturalism of the nude to examine the “naked,” exploring the naked in a social context, in the case of Fischl, or, with Freud, the psychology of the human body and mind stripped bare, left to its primal state. However, with Fischl, the subject is often used in an overtly sexual context; the individuality is primarily irrelevant and reduced to the carnal. Contemporary artist Marilyn Minter instigates ideas of ornament and clothing and their social context. In her lush and gaudy representations, dress and excess defy social norms, breaking social rules. An expensive shoe, although filthy and smeared, is still glamorous. Here again we see how the power of dress possesses the ability to transfix, to create, to identify, to individualize.

Many relevant questions are raised in Frei’s exhibition. The very nature of identity is put to the test. Is it we who wear the clothes or do the clothes wear us? Who are we in society? Does wearing an expensive shoe automatically make one above someone with a less expensive shoe, even though the expensive one is smeared and stained? Without clothing, are we merely sexual, like a Fischl, or generalized like a Venus by Titian? What constitutes our individuality? Such questions are addressed in this exhibition. Frei’s lucky discovery of used clothing, with their mystery and reuse by a contemporary sitter, allows the viewer of this exhibition to examine such issues, initiating an inquiry into a society which is more and more based upon individuality and what separates as opposed to what connects. 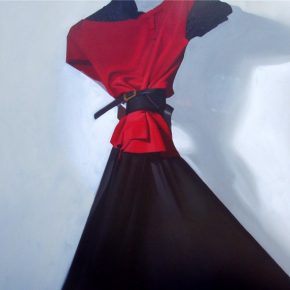 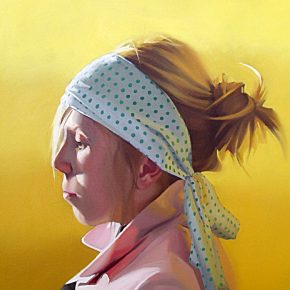 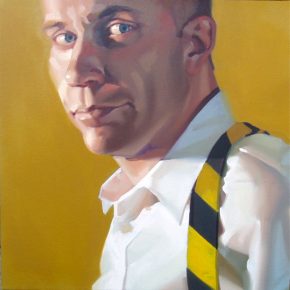 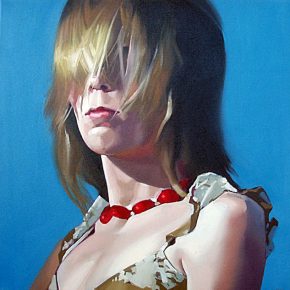 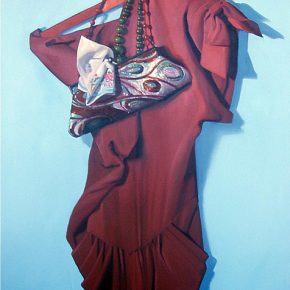