The former home of Gladstone Furnishings in Salt Lake City has gone through a series of changes over the past few months. The building located at the corner of 3rd East and 17th South formerly housed an antiques shop. Since February, however, paintings, photographs, digital images and sculptures have replaced chairs, cabinets and credenzas.

Jim “Meats” Meier, a local painter and digital artist, transformed the space into an art gallery and gave the building its new name, Meats Gallery. Meier began his artistic career using pencil and airbrush. When he began working for Salt Lake-based Beyond Games, however, he developed his digital skills in Photoshop and Maya. Digital work has now become his principal medium. He has used his technique to make an award-winning animated film which has been featured on the Independent Film Channel. He also uses the work to create still images which are intricate in detail and alive with imagination. Meier’s type of artwork is not normally seen in galleries in Utah, however. Since February, Meier and like-minded artists have been displaying their unique brand of art to the public at the Meats Gallery. Their styles include surrealism, fantasy art, and dark expressionism. These sometimes dark somewhat moody works create a striking ambience uniquely fitted to the crumbling brick that makes up many of the walls — some of which seem works of art in their own right. 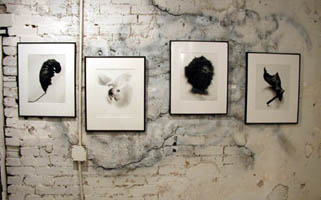 The artists in this show — Dave Laub, Ryan Peterson, Miles Woods, Randall Sagendorf, Alex Ferguson, Eric Delphenich as well as Meier — have displayed together before and find group efforts a valuable asset in their attempt to exhibit artwork that receives little attention in Utah’s normal gallery circuit.

On Saturday, March 30, the group held a Closing Party to celebrate the end of the exhibit and the end of Meats Gallery in this incarnation. Jim Bean, a cello and guitar combo with atmospheric effects, played on a small stage in the front of the gallery while a number of young and enthusiastic art lovers enjoyed food, drink and some fantastic artwork. The group looks forward to future exhibitions where their unique art forms can gain further exposure. 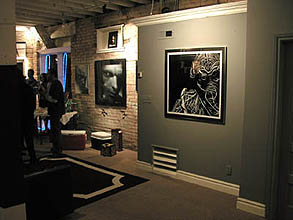 Meats Gallery: Second Helping
The name is remaining the same, but during the month of April a new group of artists has taken over Meats Gallery.   Now showing at the gallery during the month of April is 12 Artists 12 Styles. Jason Zimmer, adjunct professor of art at Salt Lake Community College and Brigham Young University, has arranged this show for his upper level students. Zimmer explains that these artists, whose style range from traditional oil paintings to comic book art, were chosen for their unique artwork and level of professionalism.

All twelve members have devoted time and means to promoting the show as well as catering and hosting the gallery. For many, this is their first exposure into the art world and their first experience of showing their work beyond the college campus. 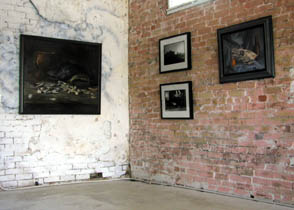 This article appeared in the April 2002 edition of 15 Bytes.