The Awkwardness of Being 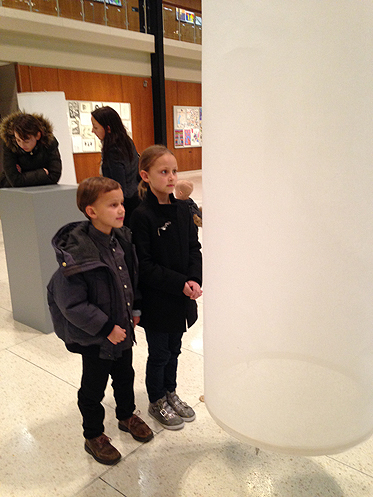 Light has been many things to artists, from the scientific explorations of the Post-Impressionists, to the primary place it took in the Modernist agenda of formalism and even its place in contemporary atmospheres of total transience. What are we to think, then, when a contemporary artist calls something so fundamental and so sublime “awkward?”

“The Awkward Intrusion of Light,” a large-scale installation by artist team Rob and Georgia Buchert, up at BYU’s HFAC through mid-January, takes its form in numerous fabric columns suspended above the ground of the college’s Fine Arts center.  Buchert calls these columns “veils,” a term which in the LDS faith represents the division between the temporal and the eternal.  “It doesn’t matter where you stand,” says Rob Buchert of the installation, “inside the column, outside the column, the veil is the same and the metaphor of light is the same.”

Buchert sees this light as “the representation of anything that enters an individual reality to cause a fissure in that reality causing the individual to act upon the intrusion.” It creates, he says, an “awkwardness,” and is a superb semiotic metaphor for the meanings the Bucherts are trying to convey. Along with the fabric columns, the installation features two tall, rectangular boxed listening stations playing a recording of an abstract narrative of recorded voices. These voices are the omega to which the light is the alpha. The luminous alpha is a pure element, but the abrasiveness of living causes disruption that somewhere along the distance between alpha and omega leads to all sorts of dialectical awkwardness.

Philosophers are not the only ones to engage in dialectics. We do so all the time. Every moment we as existential beings are faced with a choice, between what may not be exactly extremes of opposites, theses and antitheses, but choices nonetheless — we must decide not only what to choose, but how we ourselves will decide to create a synthesis of our own being.

Yet surely the Buchert’s intent was not to be so scientific about the factor of awkwardness, however it might be demonstrated on a scale of purity of light and the abrasiveness of the abstract sound narrative of every-day living. Nevertheless this scientific method is sure ground to what the Bucherts are presenting, which is a general consideration and awareness of everyday freedom of choice and responsibility, its potential sources, and one’s responsibilities to them, for one’s self in one’s own progression and how everything done has an effect on not only the self but the world around us.

Tagged as: Rob and Georgia Buchert