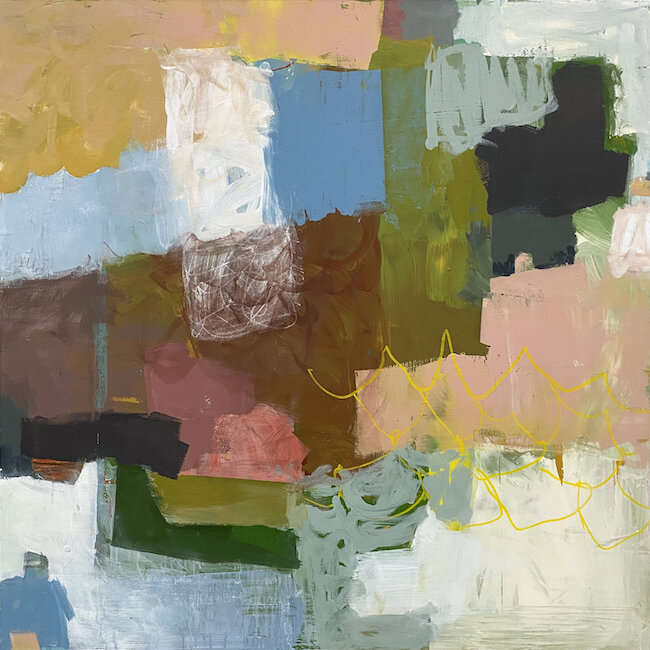 It quickly becomes apparent from her Instagram posts that Terri Froelich takes countless photos of her nautical environment, mostly shot close enough to isolate textures like wood grain, rusty industrial decay, sun-dappling on water and any bright colors that sport unexpectedly on the dull fabric of the everyday. Then working on relatively large panels, like six-feet-by-five, in her Sausalito studio beneath the Golden Gate Bridge, she swaps these fragments’ identities with each other until what emerges presents the visual equivalent of a free-form jazz combo. We could do worse at this point than to take these names literally: Sausalito, from the Spanish for a little grove (or ensemble) of willow trees, and Froelich, which as fans of Beethoven’s Ode to Joy will recall, means “happy.”

If there’s a more essential bayside landscape than “Discovery,” part of the current show at Julie Nester, I don’t know it. Recognizable through the pleasing arrangement of industrial structures are at least one boat hull and several glimpses of sunlit water. Nothing is too explicit, too locked down, and the same slanting rectangles that suggest the perspective diminishment of shed roofs also convey the lifting spirits of an attentive witness. What’s lost in this digital thumbnail is how much presence can be evoked in nine square feet of colorful paint. Sausalito is famous for its houseboats, a hybrid form that isn’t quite fish or fowl, but Froelich’s “Floating Home” triptych distills the way these one-of-a-kind environmental compromises don’t fully submerge into nor entirely emerge from their surroundings.

In a way, Froelich’s career has re-enacted the historical transformation of painting by photography. Just as the camera initially changed what was expected of art, so a century later, after the photo had been fully accepted into the pantheon of art, digital photography once again tore up the rule book. For Froelich, the loss of detail and optical presence, what she calls “precision and tactility,” that characterize most digital images robbed her of her primary purpose in taking photos. She began to mix her camera work with painting, eventually leading to two parallel bodies of work in which the newer medium points the way, but the older one following it better delivers what she wants her art to convey.

Froelich admits to repeating what she calls “rustic details” which, however, shade into the economy of abstraction, which dictates that the same shape can fulfill a range of tasks. In “Midday,” brush size and arrangement allow the same periodic, drooping line to invoke fish scales, nets, and ever-present ropes strung on boats and buildings. In “Shipyard” the same shapes add anchors to the mix. First and foremost, though, they constitute one of those moments when a child’s scrawl — a continuous wwwww across the page that says “water” — is elevated to unmistakable visual speech, like airborne m’s and w’s that speak the name of “seagulls.” Again, none of these figures is meant to be a likeness. Rather, shapes and colors she observes while exploring with her camera and remembers fragmentally take over her imagination the way light scatters and dazzles when reflected or refracted, and emerge in much the same way. 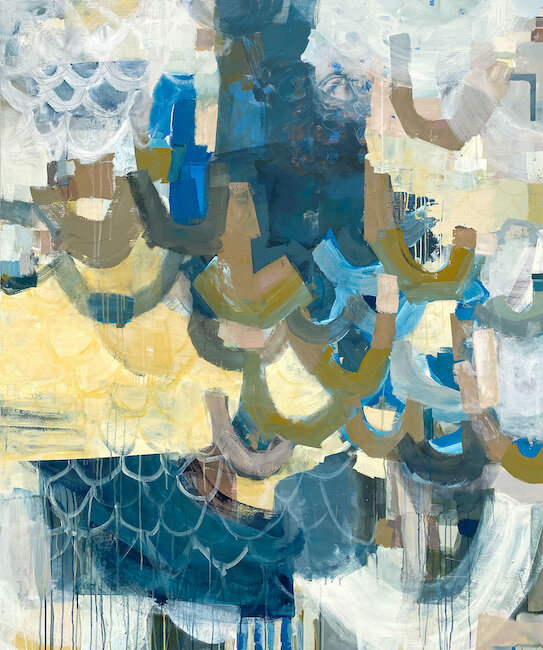 In a statement, Froelich writes, “My challenge is to reconcile diverse and sometimes conflicting experiences into a balanced piece of art that exposes strong personal meaning.” In other words, her point is neither to present a unified, romantic vision of her surroundings nor to conceal the aesthetic conflicts modern life presents her with. Her visions don’t immediately resolve themselves, as illustrations typically do, but given a little while to work on them, the eye and mind of the viewer will come to that moment when that “strong personal meaning” is revealed. That moment is one of art’s true rewards.