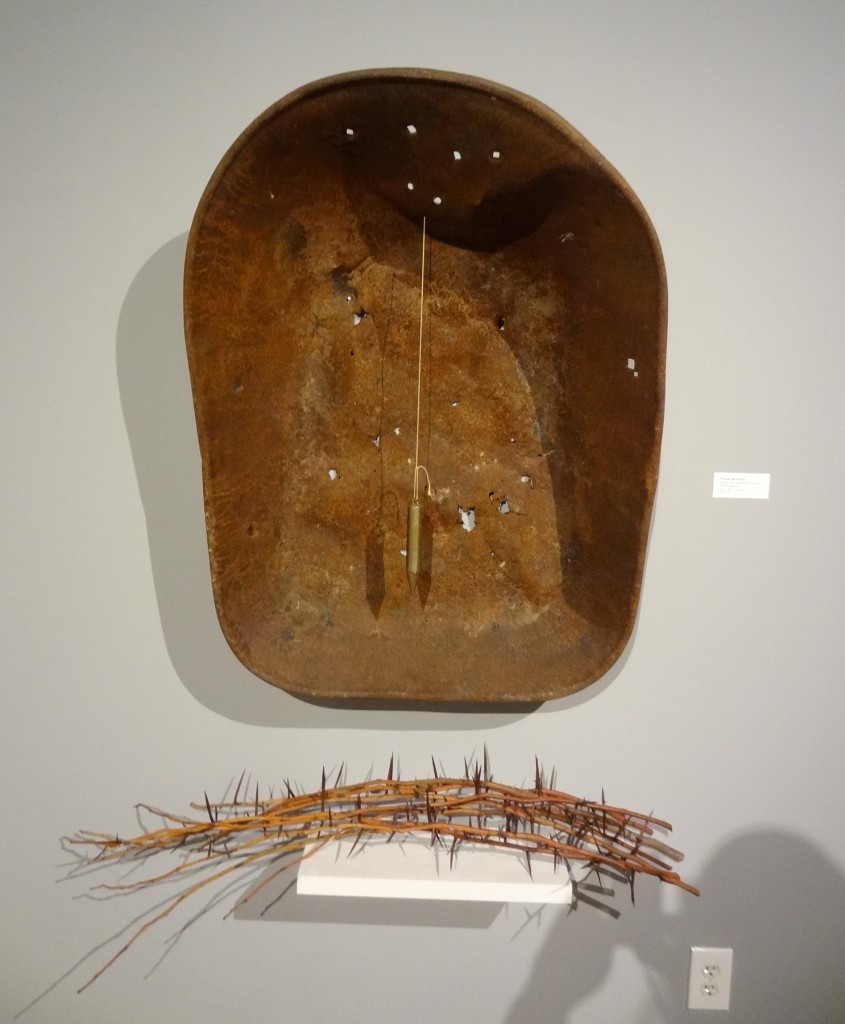 For a long time, now, I’ve been aware that Frank McEntire, aside from being one of the most prolific, influential, and important artists in Utah history, is also one of the most consistently misunderstood. In part that’s because every critic who takes on this quintessential figure in the dynamic Utah arts scene wants to put a unique and original spin—a personal claim, if you will—on the man and his protean style, with the result that no critical consensus, or even single clear perspective, has emerged. Just what it is that motivates McEntire isn’t obscure or mysterious; rather, it’s obfuscated and misconstrued by unjustified assumptions based largely on the iconography that he so often borrows from popular expressions of religious faith. Clearly, the assumption goes, he must be either supporting or satirizing the deeply felt beliefs that give rise to the revered objects he dismantles and reconstructs. Yet the artist has left copious evidence, and more than a few explicit clues, about the nature and boundaries of his philosophical curiosity. In Double Vision, his current exhibition at Finch Lane, McEntire offers some of the most explicit examples yet of the unique personal vision that guides him as he explores the reality of human nature, human experience, and the bedrock reality that underlies both. Here the meticulous, discernible similarities and contrasts between his works and those of his good friend and fellow artist Jody Plant serve to clarify the things that lift his art above legitimate ornamental and commercial concerns and into the realm where aesthetics align with indispensable truth.

By mutual agreement of the two artists, the theme of Double Vision includes earth, wind, fire, and water. Back in the Classical era, when the Greeks invented science almost as we know it, these elements in essence comprised their Periodic Table, and even today these four summon to mind nature in all its dimensions: solid, liquid, gas, and energy. In order to make clear, however, that they meant their theme to transcend material reality, the artists added: “There is a fifth element . . . to which the works in Double Vision aspires. Through the alchemy of assemblage and collaborative encounters with the four elements, we evoke in our work this esoteric, or ‘non-physical’ fifth element—that element, transcendent of the material world, conjured, although fleetingly, during solitary work in our respective studios.”

While neither Plant nor McEntire ventures to put a name on that fifth element, such a non-material presence that is “conjured, although fleetingly” by material encounters has long been recognized in the field of aesthetics, and has even been given a name. James Joyce, following Thomas Aquinas, called it “an Epiphany,” a term borrowed from the New Testament account of the arrival of the Magi. An epiphany is a moment when a physical approach brings about a sudden and new understanding.

Joyce, who was educated within a religious tradition but later lost his faith, took note of the word’s double meaning, as the manifestation of either a divine being or of the essential meaning of something. It’s important to realize that such an experience cannot be restricted to a spiritual or religious context. Frank McEntire knows this, and in fact the missing key to understanding his work has heretofore been the early influence on him of a scientific worldview, two examples of which are explicitly invoked in Double Vision.

First, though, consider one of the most eloquent aesthetic epiphanies at Finch Lane. In an assemblage titled “Along the Canal Road” (2016), McEntire juxtaposes three simple elements. One is the worn-out, rusted, and finally discarded box body of a wheelbarrow, which is hung on the wall, while laid out beneath it is a sheaf of nasty-looking thorns. One may ponder what these two unrelated objects have to do with each other, urged on by the third element, a plumb bob that hangs like an arrow pointing from the box to the thorns. Or a viewer may quickly recognize the similarity between the hollow steel background and a niche or shrine, within which an effigy, or before which an offering might be placed. At this point a cascade of connections, conscious or not, may follow. The wheelbarrow invokes manual labor, especially the carrying of weight, which is a frequent concern of McEntire’s. On the wall it becomes an enclosure, but both an enclosure and a wheelbarrow are used to set something apart, which, whether it is moved in space, time, or value, requires doing work. Was this what Frank McEntire had in mind when he created this shrine? Probably not specifically. He responds rather to an inchoate curiosity that drives him: a need to find out how objects may relate and what they can tell us when placed together. There are sure to be many other possible discoveries to be made along the Canal Road, and no one neutralizes or negates another.

Only subtle visual clues associate the tabletop assemblage titled “Silent Spring” (2016) with the groundbreaking environmental study published by Rachel Carson in 1962, which led to both the end of DDT use in American agriculture and the creation of the Environmental Protection Agency eight years later. Of course spring is more commonly associated with the burgeoning of life than with silence, but more to the point, Frank McEntire is the right age to have been influenced by the book and its massive impact, or even by the actual events it recounts. In fact, he adamantly claims this pivotal example of a scientific text that transformed popular culture as one of the earliest and most lasting of his formative experiences. Of course, there is nothing in Silent Spring that is inherently antithetical to the development of an artistic talent, or for that matter a deeply spiritual perspective.

Atop the slab of steel that covers the table, “Silent Spring” presents three massive blocks of mined salt, their rough sides contrasting with the smooth saw cuts that divide the original vein into thirds. Laid across their bulk, a birch tree fragment holds a paper wasp nest, the craggy exterior of the salt alternating with the elaborate linear pattern of branches and then the swirling gray striations of the paper sphere, opposite which a chemist’s bottle full of fragmentary paper scrolls sprouts two black feathers. This meticulously assembled composition brings together the two elements of the Zen Buddhist meditation known as haiku—the presence of the eternal with the eruption of the instantaneous—except that one essential element, the poet’s voice, is here represented by the absent humming of the wasps and the bottled-up voice of Rachel Carson. Here McEntire reminds us that Carson’s proof of the disastrous impact of DDT was the failure of birds of every feather to lay viable eggs, a blow to their families we encounter again when we contemplate “Silent Spring.”

It may be splitting hairs—though this is exactly the kind of distinction critics enjoy making—to argue that the book that inspired the most visitors to Utah wasn’t the one dictated by Joseph Smith. Rather, that honor may rightly go to Edward Abbey’s Desert Solitaire, a perennial best-seller since its publication in 1968. Not only did it bring countless pilgrims (including this critic) to see Utah’s incomparable wilderness for themselves, but it also inspired many Utah residents, including members of the LDS Church, to re-evaluate their relation to the land they inhabited. One of those was Frank McEntire, who celebrates Abbey’s impact on his life in his major contribution to Double Vision, which presents Desert Solitaire as, in effect, the flip side of Silent Spring. But to talk about “Silent Solitaire” (2016), a Remington Model 11 typewriter spewing a black scroll that, when lit from behind, reveals alternating texts from the two books, requires talking first about McEntire’s working method. Preferring not to show old work, he is likely to resume working on the occasional piece that doesn’t sell quickly. One work included in Double Vision that was shown once before in a different form is “One Dark Drop” (2015), a geologically-layered monument to the impact of oil on modern life. When this column of stone, steel and glass came back from a previous show, he went to work on its base, which felt insufficiently unified, and produced the stronger version on display here. This implies that every current McEntire is a work in progress, and “Silent Solitaire,” which is a deeply personal, even autobiographical work and feels less completely resolved than some others, may continue to evolve. Such a hermetic work might become more candid, even transparent, as the artist digs into the meaning and significance of these books, whether for himself or the society on which his works comment so tellingly, although further progress could also take the form of other, completely separate works.

There are six more McEntires made for this show, as well as one collaboration with Plant: further evidence of their interaction can be found in nests, feathers, and other shared materials. In each case, he uses materials the way a painter makes strong, expressive marks on canvas. “Levitation” features a bucket that barely survived a fire so hot it crumpled the metal, from which ruin a stone seems to be emerging as if rising free of gravity. “Lift” and “Whispering Stone” further explore the relation of gravity to weight, which seems far more about direction and resistance than attraction: the vertical, after all, is always the strongest alignment. “Gaia Grotto” explores another recurring theme: earlier grottoes have concealed, hidden, protected, and iconic figures and sacred buildings like cradles. Here, the simple juxtaposition of objects with rich associations—a massive stone and a large chain casually coiled on a heavy cart—sets up the universe that surrounds and menaces. Closest of all to the religious subjects McEntire has seemingly omitted here are “Pyre,” an enigma in which a sacrificial animal stands athwart a seemingly incombustible altar, and “Fragrant Sura Stone,” an ambivalent, metaphorical image that asks how much can be wrung forcefully, even from the word of God.

British author James Meek defines Myth as “a story that can be retold by anyone, with infinite variations, and still be recognizable as itself.” Today’s myths can be about subjects ranging from the divine to the political, using whatever narrative means come to hand, with those materials hung on a structure so universal it will be recognized whatever is done to it. In his art, Frank McEntire engages in such myths, sometimes harshly and at other times with great sympathy. No doubt he is aware of the degree to which his audience wants those myths to be true, and want him to turn up happy endings for them. But he knows, having learned from the likes of Rachel Carson and Ed Abbey, that he owes his first responsibility to the natural order: to fire, to wind, to water, and the earth, in whatever way they epiphanize upon him as he works in his studio and in the world. And so his work proceeds, in solitude and silence, and we must listen with open minds and hearts to hear his prayers.

See here for our profile of Jody Plant in the March 2015 edition of 15 Bytes.