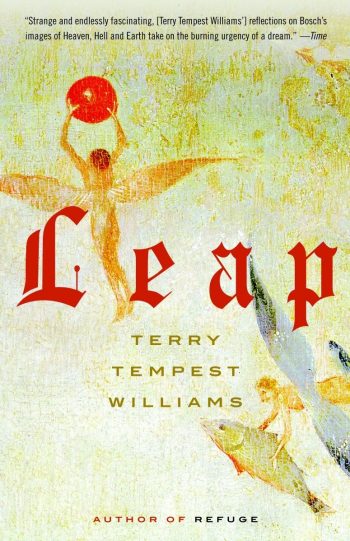 “This is not safe,” is a caution we should attend to, but might feel we can overlook. “This is not safe, and it can’t be made safe” is another matter. A threat that cannot be neutralized is a threat indeed. In 1940, during the lull in the storm that became World War II, the poet W. H. Auden wrote a loosely structured villanelle in which he inverted the ancient homily, Look before you leap, saying instead “Leap before you look.” Then he goes on to say that life itself is not safe, and effectively can’t be made safe, so we must accept the risks inherent in whatever action we choose to take.

Terry Tempest Williams chose Auden’s opening line as the touchstone of Leap, a vintage 2000 memoir-cum-essay covering the seven years she spent immersing herself in studying “The Garden of Delights,” an enormous, paradox-filled altarpiece by the Northern Renaissance artist Hieronymous Bosch, who painted during the years when the Christian Church, which in those days dominated all of Europe, was in a crisis that would lead, less than a decade after the completion of “The Garden,” to an irrevocable religious reformation. Thus the art of Bosch — El Bosco, as he was known to the Spanish nobles who avidly collected his art, and is fondly referred to by Williams — has historical parallels to the period of religious ferment that brought about the Mormon culture in which Williams was raised and to which she adheres.

That said, Williams is hardly unique, or even unusual, in having been captivated by “The Garden of Delights.” Rather, it would seem that if someone with little or no background in art takes a shine to an odd (in this case, truly odd) work of art, the chances are good that it will be this one. Unlike, say, “Mona Lisa,” which is so widely reproduced that its popularity comes as no surprise, El Bosco’s masterpiece has been the unorthodox icon of generations of free thinkers who won’t wait to be told what they should like. Anyone seeking an account of a seven year encounter with an object that countless viewers, from neophytes to experts, have chosen for themselves, often for its counter-cultural appeal, could do worse than to spend a few hours with Leap and its perceptive, broadly-educated author.

Besides her faith, there are at least two major themes at the heart of Terry Tempest Williams’ many essays, and all three play major roles in Leap. The first is loss, something she learned about early and wrote about in her magnum opus, Refuge. How else, other than as a result of the nuclear weapons testing that took advantage of the West’s scant (and powerless) population, can one account for the numerous cancers and at least seven deaths that punctuated her family history so relentlessly during her early decades? The toll on her female relatives may also account for her close relationship with her father, a major influence in her life with whom she tries to share “The Garden of Delights.”

Williams says she came to writing through teaching, which was a component part of her life’s work in environmental science. She found telling stories to be the best way to teach, even though some of her early storytelling efforts got her into trouble with the institutions where she taught. But whether in the scientist, the teacher or the laureate of loss, an all-consuming concern for the natural world is constant. Meanwhile, the more than ninety-square feet of “The Garden of Delights” includes an astonishing variety of plants and animals. Most viewers probably assume they are part of the artist’s unmatched imagination, but Williams identifies many, if not most, as real species. Their abundance in the painted world five hundred years ago was a kind of prayer, the artist’s recognition of God’s munificence towards his creation. The contrast between then and now, however, points to an on-going loss, often called the Sixth Great Extinction, which like each of the five before it did, threatens to become the final death of life on Earth.

The combination of her anguish before the threat of extinction and for the irrevocable loss of whole plant and animal species places Williams’ powerful storytelling skills at the service of what many in her audience will feel is the most important challenge of our time. Her deep, synergistic experience with both love and loss has enabled her to write with unsurpassed feeling about the devastation of the natural world. For some of those readers, it may be that Williams’ poetic voice gets in the way of her message, which they may feel requires more direct speech. Those readers may prefer writers more along the lines of Rachel Carson or Elizabeth Colbert, who focus on their arguments rather than their emotions. These three are among the most essential voices of our time.

Yet while no mere reader would dare question Williams’ pleas on behalf of the natural world, they may fall on deaf ears among some of her fellow Mormons. This community represents the backbone of her repute as chronicler of family loss, personal tragedy, and the living landscape, but the chaotic and vulnerable reality of the biological world has never fit and will never fall within the boundaries of fundamentalist religion. Consider, for instance, this suggestion by Bonnie Baxter, Director of Great Salt Lake Institute, who credits Terry Tempest Williams with introducing her to the Salt Lake basin and who argues that those who arrived with Brigham Young in 1847 were seeking a desert place not unlike the Holy Land of the Israelites. How do their descendants feel about the hot, dry climate that so distresses scientists? We may argue that this conflict affects Williams’ public image but not her advocacy; but writing being the social act that it is — in spite of the nonsense about lonely writers in garrets writing only for themselves — resistance to her message from her original and most natural audience may undermine the confidence her efforts require. What’s needed, after all, as Auden wrote, is that the historically hesitant to budge now take a leap of faith.