READ LOCAL First (RLF) is a READ LOCAL monthly installment of fiction, poetry, literary nonfiction and memoir by some of Utah’s most celebrated and promising writers. Formerly “Read Local Sunday” and originally “Sunday Blog Read,” 15 Bytes founder Shawn Rossiter and Literary Editor David Pace launched the publication in 2012. Since then, Pace has amassed an incomparable archive of emerging and established literary writers with ties to Utah.

This month, we’re excited to announce the first-ever READ LOCAL Onsite at the Salt Lake Library, Marmalade Branch. The event will take place on April 12 at 7:00 p.m. and features this week’s READ LOCAL First author, Susana Barlow. Barlow was First Place Winner for Creative Nonfiction in the 2017 Utah Original Writing Competition. We’re excited to publish this excerpt from her award winning work, Not In My House. 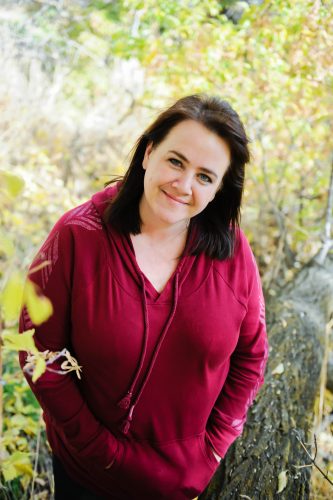 Not In My House

The pavement was warm under my bare feet. I slipped past the car parked in the lean-to and opened the front gate, closing it quietly behind me. I was out on the sidewalk in my nightgown and robe. I loosened my hair out of its braids until it was hanging down my back. At the curved slope of the road, I stopped, one bare foot straddling the faded yellow line. A translucent moon was falling toward the dark triangles of the eastern mountains and I could just make out the blue and white bus stop sign, steady and straight next to the vacant bench. I knelt down, both hands flat on the pebbled black asphalt, like two fallen white butterflies delicate against the hard road. I lowered my body onto my back until it was aligned with the blurry yellow paint that I could just see from the corner of one eye. It had become my ritual every Friday morning. To taste the tip of death’s tongue. I opened my robe and arranged my hair around my head. I listened to my heart; the drumming signal of life, my life, the sound of my breath drawing in and the sensation of pushing it back out. I felt the lumpy hardness of the asphalt under my head and the roughness of it against my bare legs. Although it was after four in the morning, there were still a few stars visible in the night sky. I kept both arms pressed against my sides and I listened for the sound of a vehicle but it was quiet.

Then I heard the throaty rumble of a truck in the distance. I saw myself as a wild animal caught in the path of oncoming traffic. It would be too late. There would be blood on the street. I could see the road closed off and police lights flashing red and blue against the white siding of our house on Fifth East, the neighbors with their hands over their mouths in horror. I willed my body to stay though it shuddered and twitched. I could no longer feel the road beneath me as the truck drew closer, its rattling windows like a persistent cough. I felt the earth vibrate with the music that blared from the truck and beat in time to the breath that was still rising and falling faster and faster within me. My body quaked and my arms and legs trembled. The headlights lit up the road before me. I would be visible soon.

It was the same struggle every week. I never intended to kill myself until the moment was before me, and then death became warm and seductive. I only needed to hold still for a few minutes longer and it would be over. Mother Kay could never hurt me again. But it wouldn’t be over. Mother Kay would stand at my coffin pretending she was grieving, telling everyone it was too bad I had gone astray and how my disobedience had led to my death. No one would ever know the truth about what she had done to me. Mother Kay would survive and I would be forever silenced.

But this time the truck was too close. I stood up in a single fluid motion, the bright headlights in my face, and ran, my robe sliding off me as I fled. The empty sleeve flapped against my thigh while the rest of it dragged behind me like a wounded limb. A burst of wind and the sustained honking of the truck as it passed me sent my white nightgown twirling up to my bare knees and my long dark hair was lifted up and fell back as if in a great exhalation. I closed my eyes and felt the force of the truck as it flew past me. I turned and watched its red taillights flicker before it made a left turn at the stoplight. I slid my arm back into the sleeve of my robe and stood alone in front of the house, eerily calm.

Later that morning I went upstairs to take the daily glass of lemon water to Mother Kay. The water in the glass was warm in my hands. I carried it slowly so as not to spill it down the dark hallway. The door creaked when I opened it and I held still for a second with the water in one hand and the door handle in the other. I slowly opened the door further and put the glass in front of me so she would see what I was doing if she was awake. Sometimes I would come into an empty room and leave the lemon water on her nightstand, keeping my eye on the light coming from underneath the bathroom door. But this morning she was in her bed. I walked softly toward her and set the lemon water on the nightstand. The pale light of dawn filled the room. Mother Kay was lying on her side, facing me, with her eyes closed and her breath soft. Her lips were slightly parted and the blanket rose and fell with her breath. One arm was exposed and hanging over the side of the bed, its paleness exaggerated in the milky light. I wanted to turn away, hurry out of the room, but I couldn’t. There was something startling about her body. Usually when I came in she was nothing more than a lump under the covers with a bit of hair sticking up from beneath the sheets, a shape, a dark hulk that I was grateful was sleeping. I stood a few feet from the side of her bed and stared hard at whatever it was that had taken me in. Her face had long curves of shadow across her cheeks, giving her eyes a sunken appearance, and her hand that so often held a belt or a stick was limp, like a surrendered flag. I noticed her nails, the smoothness of each one and how perfectly shaped they were with their manicured cuticles and evenly cut tips. Her skin was flawless, not a freckle or a blemish, her bones hidden beneath soft flesh as she lay silent and unmoving. Mother Kay trusted me. She could beat me whenever she wanted and know that I would bring her lemon water the next morning as if nothing had happened. She trusted me to be in her room while she was asleep. How did she know that I wouldn’t hurt her while she lay sleeping? How easy it might have been to hold a pillow over her face until she was gone. Sleeping forever. I could end it all, and not just for me, for everyone. But I knew, even as these thoughts floated out of me, that I would not hurt her. We were bound together. That was what I saw when I looked at her lying in bed. Me. That part of me that she carried recklessly around with her like a forgotten trinket. When I looked at her sleeping I didn’t want to hurt her, I wanted to reach inside her and take back what was mine. I could almost hear it calling out to me and I was afraid that it would be lost inside her; that it might dissolve in her darkness. I backed out of her room and closed the door silently behind me.

Susanna Barlow is a full time freelance writer. Not in My House is her first full-length memoir and was First Place Winner for Creative Nonfiction in the 2017 Utah Original Writing Competition. She’s been a presenter at the Successful Mothering Convention in Sandy, Utah, the Lecture Room Series in Sun Valley, Idaho, and keynote speaker at The Abuse Recovery Center in Portland, Oregon. She lives with her husband in Bluffdale, Utah where they are raising their six kids.