Susan Kirby, Returned from Mexico, is Full of Surprises 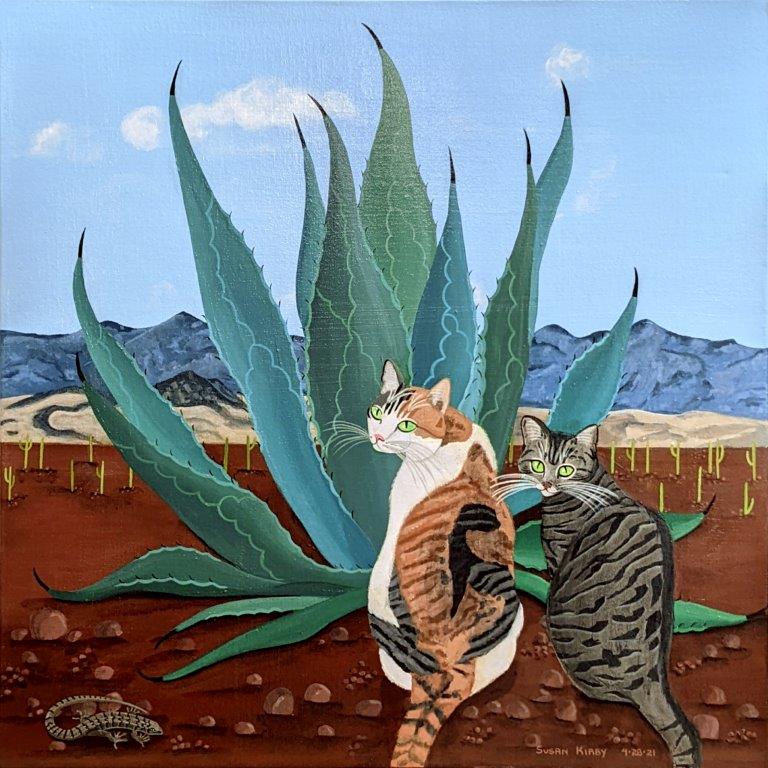 Susan Kirby loves Mexico — so much so that her last vacation there lasted six years.

I mean, she bought a house (“a modern one”) in San Miguel de Allende, adopted two Mexican cats, Frida (smile) and Brigit, then settled in and just painted. Well, she took tango lessons and studied Spanish, too, but Kirby always has been a multi-tasker. (She paints, sews, cooks — studied in Paris at Le Cordon Bleu — and typically works a couple of jobs.)

A Salt Lake City native, she hails from artistic stock: her father was a writer, her mother an avid collector and supporter of local artists. People that hung out at her childhood home were Utah artistic royalty – those whose work you still find in area museums: Don Olsen, Lee Deffebach, Ralph Schofield. And they encouraged Kirby to paint. She has delighted local audiences with her naif work, in exhibits at the late Patrick Moore’s Sugar House space and at Phillips Gallery, as well as with murals in places like Market Street Oyster Bar and the Baci Trattoria. But she has always been struck with bouts of wanderlust, the most recent resulting in this six-year time in Mexico. 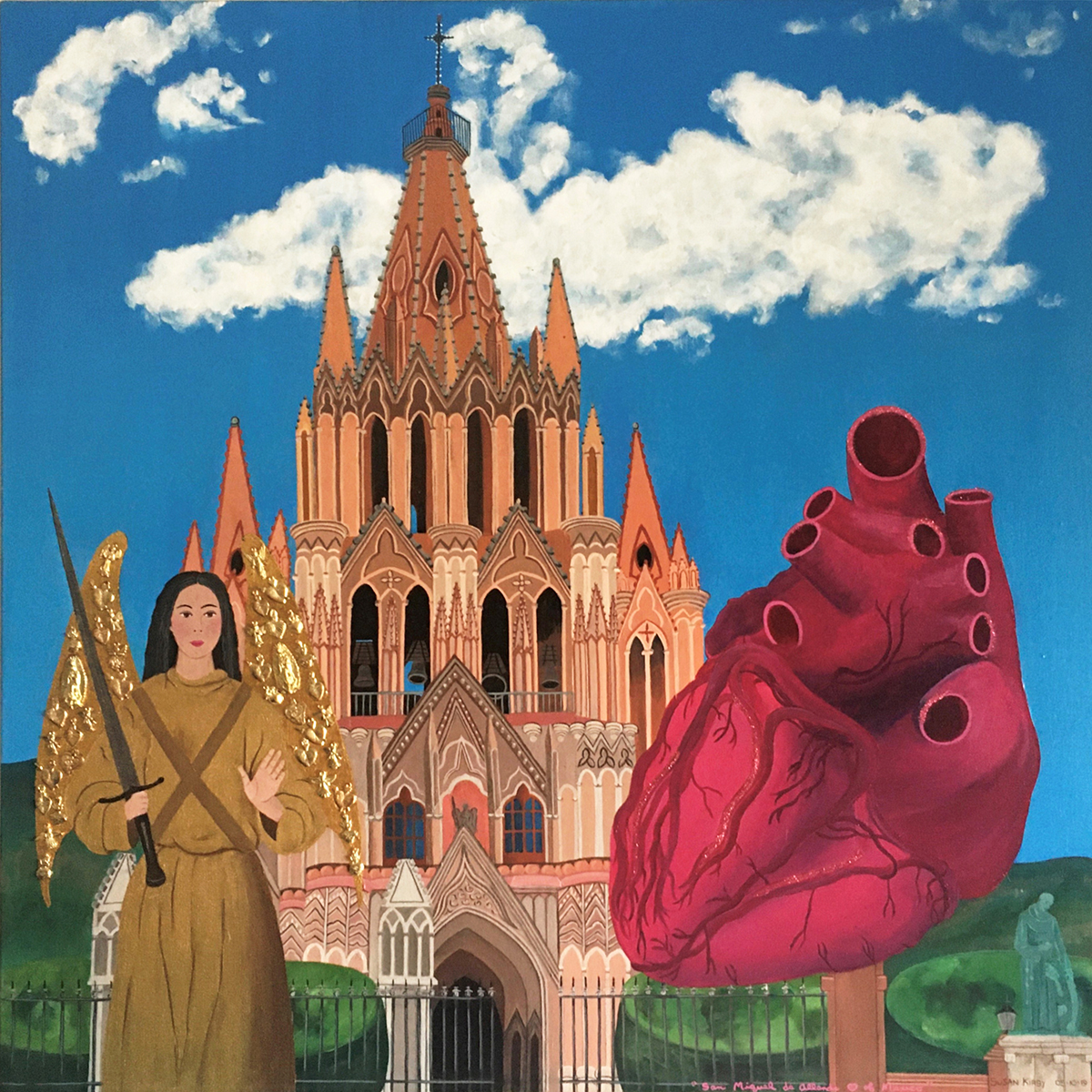 The artist was forced to return to Utah in January following emergency open-heart surgery in Mexico. She couldn’t breathe after a tango festival and learned that her mitral valve wasn’t pumping. (Yes, concerned readers, the Mexican cats flew back with her. One in its own ticketed seat, the other curled up beside Kirby in hers.) (Oh, and the artist is thinner than ever but doing much better now.)

The results of her south of the border sojourn will be on display in Phillips downstairs Dibble Gallery starting Friday through Oct. 14th in a show titled Viva la Vida (Long Live Life, Kirby translates) – some 35 paintings and half a dozen of the artist’s charming stuffed and beautifully outfitted Frida Kahlo dolls, all created in Mexico, are included in what we are told will be a surprising exhibition celebrating Kirby’s “full and adventurous life” and past several years residing in San Miguel de Allende. 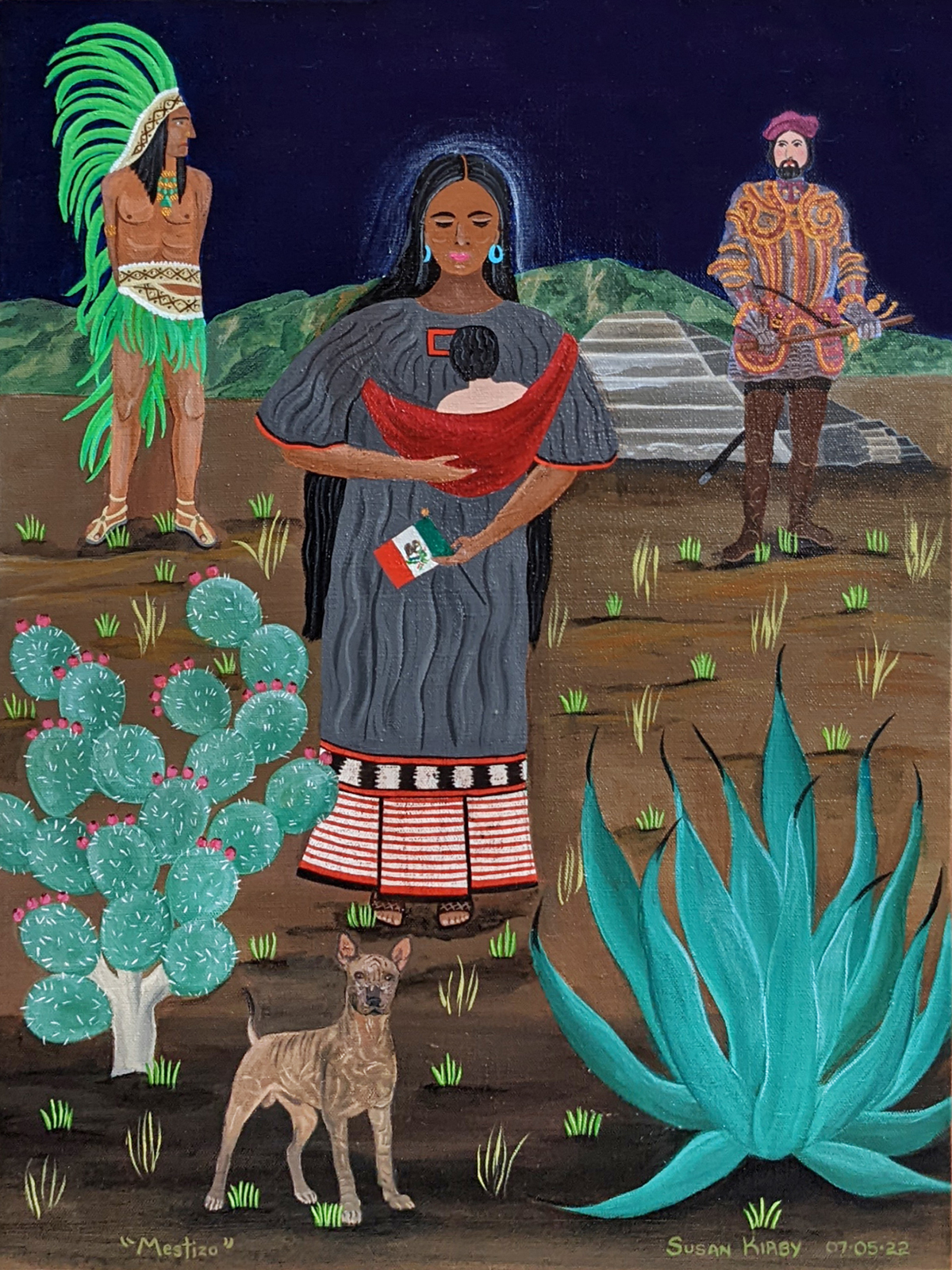 Only one painting will be from her Utah years and that depicts herself, her parents and sisters (with the family cats) in their living room of long ago.

The new paintings, while dreamy and frequently quirky in the way we so admire, are also rich in crisp detail. Kirby has clearly worked these past six years at delivering her unique stories with consistent clarity and a newly sophisticated style combined with manifest virtuosity in handling her brush. Oddly, that doesn’t detract from the simple painterly elegance of her work but rather serves to highlight the beauty found in its carefully thought-out design. These new paintings will make you stop and look — and ponder. Kirby’s work has gone through a metamorphosis; no longer primitive in any sense but theme, it is masterfully, elegantly painted.

“Cats and Agave” is a heartbreaker, it is so perfectly drawn and oozing charm. Two cats (we suspect we know who they are) look out at the viewer as they hunker down before a startlingly beautiful (and enormous) agave plant with a mountain range stretched across the background. A nearly cloudless sky adds to the drama of the desert scene. 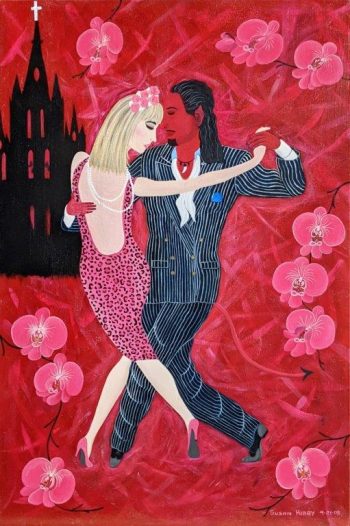 “Tango Dancers” is a wicked-good self-portrait of the artist in a pink-and-black leopard-skin backless frock wearing the highest of heels and longest strands of pearls dancing the tango with a hot partner in a striped black-and-white suit in front of a church (shocking!). You can feel the motion – it’s palpable.

Art this good is well worth dealing with the parking situation at Phillips to see. (200 South is torn up: see notes about parking below.)

Kirby says her heart is still in Mexico. “I left behind the Pyramids and the agave,” she explains. (And a lot of paintings, which she gave to the local library.)

But she brought back the tango. Be sure to ask her to dance at Friday’s opening. She just might surprise you.

Because Susan Kirby is full of surprises.

Due to the road construction in front of the gallery, Phillips Gallery’s neighbors have kindly granted permission to use two nearby parking ramps:

Midtown Plaza 230 S 500 East; access their multi-level parking ramp on the west side of their building, east of the gallery one driveway over.

Phillips says to ignore the Private Parking signs during Gallery Stroll from 6-9 p.m. tonight, but please respect the neighbors’ generosity by leaving by 9:15 p.m.