Sunday in the Dark with Bill: Bill Viola at the Salt Lake Art Center & UMFA 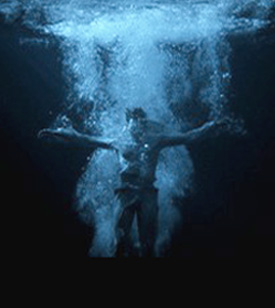 Bill Viola, this year’s Tanner lecturer on human values, is the best known and most critically admired video artist. He has the kind of all-but-exclusive prominence held by Nam June Paik in closed-circuit TV and Robert Smithson in earthworks, that Dale Chihuly has in glass or, for that matter, Christo and Jean-Claude have for draping large objects. Each has essentially become the poster child for a purported new medium of art. If you doubt the accuracy of claims made for such mediums, these examples will be cited to prove their capacity to move us as well as any modern work of art. Never mind that we might not be looking high and low for the new medium if the modern wing of traditional arts wasn’t so nearly empty. Never mind that every day something like 7,000 videos are posted on the Internet, most of them unwatchable. And most of all, never mind the reasonable argument that the success of Viola’s videos rests less on the debatable contribution of their medium and more on the visionary talent of their maker: on his ability to hammer something special out of a commonly intractable medium.

Last month the Central Utah Art Center hosted an assortment of videos by the Welshman, Peter Finnemore. This month, the Salt Lake Art Center has Viola’s “Ascension” until March 17th, while the Utah Museum of Fine Arts will be showing his “The Quintet of Remembrance” until May 15th. Finnemore is a young post-Duchampian: his videos eschew the exploration of visual beauty or the plumbing of spiritual depth in favor of criticizing the contemporary scene, especially the art world. Viola, on the other hand, makes films of nearly heartbreaking beauty that plangently evoke emotions and spiritual yearnings. If nothing else, the Utah art audience can’t complain that we aren’t being given the opportunity to taste a wide range of video art styles.

Finnemore’s touchstone is courage: he believes that fear of failure makes us failures. He responds by, as we used to say in the Sixties, letting it all hang out. He appears to test out his ideas on a first-come, first-served basis, and so far as can be determined, to leave evaluating and editing the result up to the faculties of the audience. One second-generation Utah painter that I spoke to compared the exhibition unfavorably to America’s Funniest Home Videos. It could also be said that if Finnemore is fearless, so are the stars of the Jackass movies. Yet there is something about these loose video cannons that redeems them, if only in fragments separated by parts that stretch too long. They are funny; they possess the power to make us laugh, and that laughter releases our repressed disrespect for the authority of the visual image, moving or still: the Great Dictator of our public lives.

Bill Viola’s “Ascension,” which he made in 2000, can be thought of as a quieter, more meditative sequel to “The Crossing,” made four years before. The earlier installation used both sides of a freestanding screen, on each of which a man is initially seen to walk toward the viewer. On one side he is engulfed in flames that start at his feet, while on the other he is deluged by water falling from above. Both figures eventually disappear into the visual cataclysm and the accompanying roar, transformed if one likes from one primeval element into another: earth to water, or to fire, or to sound in the air. Ultimately, coherent light becomes a maelstrom that dissipates the human figure within it. In “Ascension,” an underwater camera films an aqueous chamber into which a man plunges feet first, his arms extended fully to both sides. What looked like darkness is now revealed to be full of light that was invisible because there was nothing to refract or reflect it: nothing for it to illuminate. Eventually the man sinks out of sight, leaving the frame filled with bubbles slowly ascending, returning to wherever he came from. Once again, in addition to this cloud of light he leaves behind sounds: here, the fizz of bubbles breaking as they reach the surface.

The obvious metaphor in both works is death, but also transfiguration. Something more complex, and possibly more useful, takes place in “The Quintet of Remembrance.” “Quintet” is for all practical purposes a musical term, but in this silent film the music is strictly visual. Five figures, two men and three women, appear initially frozen in place in a small group, standing close to the screen so that only their heads and upper torsos are visible. Their clothes are dark and so is the background, a mottled wall that closes the space without defining the location. Their gazes, like the composition of a Caravaggio, describe a diagonal from the screen into our space, just to one side and below us. While at first they appear motionless, they are animate but the movement is glacially slow. Subtle shifts in their expressions and skin textures occur so slowly as to be completed before they are noticed; they may even feel like the hallucinations brought on by staring at something not actually moving. Did I actually see that? 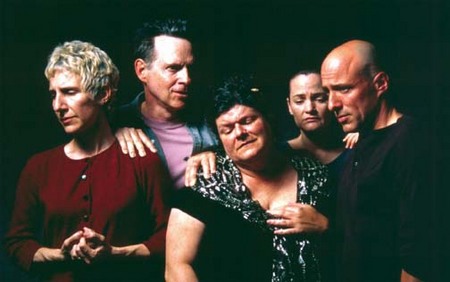 At some point—whether at the blinking of an eye or the shifting of an arm—the figures clearly move. These early, tentative shifts are scattered, and at first so isolated that the contrast between what moves and the surrounding stillness feels like an eerie variation on the special effects now commonplace in TV commercials. Then the motion of one figure seems to bring on a response in another, as though some remote, indifferent energy had passed from one to the other. Although each is independently driven, individually motivated, their movements affect each other and a complex harmonic motion arises. Each face also reacts individually, the range of expressions ranging from anger to grief to a kind of fascination bordering on mania. A kind of measured, discordant paroxysm sweeps through the small crowd, and when it passes they are all transformed by it. Then they gradually come to a stop, as much a picture—though a different image—as they were at the beginning.

Here again, some metaphors come to mind. One concerns the interconnectivity that arises in any action upon the members of a group, no matter how independent—or for that matter how united—they may think they are. Another involves the way any expression, no matter the inner state it expresses, tends to turn into a grimace when the expression is held: when we smile for the camera. Here the expression only appears not to move. In fact, the whole mask changes so slowly that one subtle expression dissolves toward another, as though we were seeing the interior process rather than the outward manifestation.

There are some things that puzzle me about video. One is why presenters so often speak of the video projection as an “installation.” To my mind, an installation is something that resists facility, not something that facilitates. I’m thinking here of Duchamp’s choice to show art in a dark gallery and give the viewers each a flashlight. A dark room with a bench would perhaps better be called an environment. Projecting a video onto a moving or dissolving surface sounds more like an installation. What UMFA built for Viola is a theater.

But there’s a more important question. Why is video art so hard to enjoy? Most viewers at the Art Center and UMFA sat through one viewing and then left. Halfway through the second viewing of the Quintet of Remembrance, my companions and I began to discuss our reactions openly (we were the only ones in the room). I remember spending an hour alone in the Vermeer room at the National Gallery in Washington, and though there were three of them, that still amounted to more time with each than I spent with Viola’s entire quintet. I learned recently that the Long Beach Museum of Art’s video collection, considered one of the medium’s great repositories, is moldering in neglect to the point where much of it may be permanently lost. I wish I could agree that this is a generational issue: that we older viewers just don’t get it like the young do. But it was the more seasoned viewers who stuck it out with Viola, who is in his mid-fifties. Those who bailed were college art students: the same young adults who routinely watch their favorite movies again and again.

The problem must lie, at least in part, in the variety of fundamental ways any narrative may take control of us for the duration of its taking place. With a novel we can stop to ponder, flip back and reread a passage, skip forward, or take a break when our minds wander. Even better, in a painting everything is present at once: the only time passing is passing for us, and we are usually in a mental state where we don’t notice. But in a video the mechanism sets the pace. We yield control and, regardless our individual outcome, become part of the manufacturing process. It is not a pretty picture.