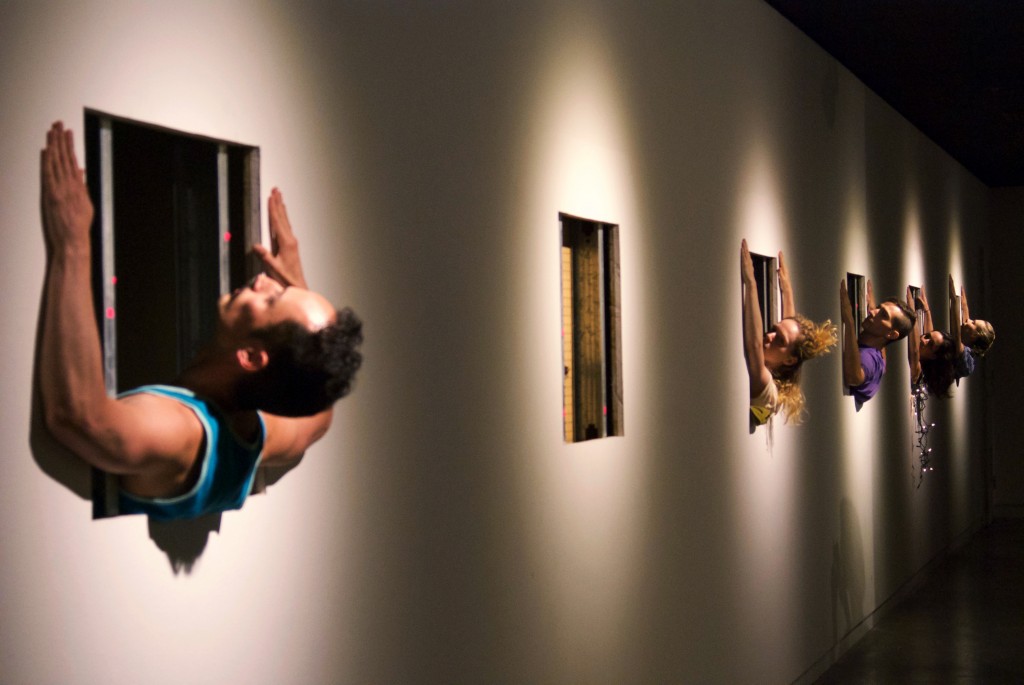 Friday night, Ririe-Woodbury continued a multiyear partnership with UMOCA by presenting Interstice, a performance installation featuring choreography by Artistic Director Daniel Charon inside of Jennifer Seely’s exhibition “Supporting Elements.” In the first two summers of this three-year partnership, the dancing, while compelling, was forced into the open spaces between gallery walls, but this summer, due to a particularly interesting pairing and the intimacy of the museum’s Street Gallery, seems to have found more potent placement.

Seely’s work effectively removes art in order to create it; cutting into, and removing, wall space rather than installing materials on top of it. Small windows reveal concealed UMOCA storage spaces, where dancers periodically emerge to complete repetitive tasks: arranging black threads on silver wires, playing Solitaire, hanging fairy lights, changing clothes, and grasping at invisible objects. If someone peeked through the walls they would see old binders and boxes—dating back to when the facility was named Salt Lake Art Center—alongside the supportive construction materials that make up the particular architecture of the space.

This summer, as in the past, it’s impossible to predict audience response. Audiences are often comfortable participating in dance from a (seated) distance but it is anyone’s guess whether they are compelled to investigate a performance more intimately and, if so, how long their attention will last. In an exhibition defined by banality of materials, that sensation is compounded by a purposeful lack of parameters (read: the dance has no apparent beginning, middle or end).

RW company member Alex Bradshaw performed in part of Interstice, often balancing precariously out of the windows. With RW alum Brad Beakes, she will present a new collaboration alongside local cellist Eleanor Cox and guitarist Jon Yerby. On July 28 their work, “BRACE,” can be seen at Art 270 at either 8 or 9:30pm (admission is free but RSVPs are required for the limited seating event). Based on reviews of Bradshaw and Yerby’s previous show at Art 270, audiences can expect to see the development of virtuosic pairings (both physical and musical) inside of limited space.

Collaborations between UMOCA and RW began under the tenure of former Artistic Director Charlotte Boye-Christensen whose new company, NOW-ID, also presents new work this summer. Just last week her collective of national dancers and international musicians convened in Salt Lake City to begin the development EXODUS, which will premiere at the Marriott Center for Dance July 27-29. Boye-Christensen is working with award-winning theater director Rolf Heim, Danish mezzosoprano Nana Bugge Rasmussen, and Bass-Baritone Jakob Bloch Jespersen with a score that features references to Danish folk songs that are only partially translated into English. The dancers include previous collaborators Tara McArthur and Katharine Lawrence alongside Adrian Fry. Lawrence and Fry are both current company members of Ballet West and McArthur, an RW alum, is best remembered for a unique power punctuated by calm. The continued combination of ballet and modern trained performers indicates the potential for idioms of contemporary ballet to continue centering the material.

Boye-Christensen’s performance investigates migration and features several European artists who may have unique perspectives on global dialogues regarding migration. But, migration in relationship to performance is also considered by RDTs summer season as well as ample local festivals. RDT has commissioned Danielle Agami (ate9 dance) to create a new work for their 2017 season. While he’s in town, audiences can see the Israeli-based choreographer’s works “Vickie” and “Exhibit B” in a one-night-only show July 15.  Like other Israeli choreographers recently commissioned by RDT, the work explores cultural conflicts.

In the festival scene, Living Traditions and the Utah Arts Festival have again supported the presentation and preservation of cultural forms through exchange with a broad public. Craft Lake City and Urban Arts Festival are two festivals yet to come that challenge what art and performance should look like by narrowing the scope to urban and DIY culture, both topics certainly at the heart of cultural modes of performance which tend to be found on the periphery of a state valuing concert dance. Guests of both festivals, hosted this year at the Gallivan Center in Salt Lake City, can see (and learn) the lineage of breakdancing, West African and Afro-Brazilian forms, among others.

One group found in nearly all the festivals above is Samba Fogo. Just finishing their Carnaval celebration at the Fallout they have spent the summer offering youth education programs teaching Afro-Brazilian percussion and dance alongside their year round offerings including open capoeira classes. The success of Samba Fogo is at least in part due to co-directors Lorin Hansen and Mason Aeschbacher’s consideration of the multiple ways they can create and serve communities. Through their work in Samba, they develop multigenerational enjoyment of and participation in dance, music and art-making.

The loveDANCEmore mobile dance series, “On Site,” concludes summer dance offerings with an August 15 concert at the Orem City Scera Pool. In addition to free admission to the pool, audiences can see new works by six artists, primarily from Utah County, who are supported by the new Orem CARE grant program to share work in non-conventional dance spaces. The pool project takes a cue from groups mentioned above by identifying a set of community needs (artists with limited stages, audiences overwhelmed by lengthy university productions) but also links up with national groups who have attempted the same.

While summer is traditionally considered the off-season for the performing arts, closing the doors of theaters and concert halls can actually spur creativity, pushing choreographers and dancers to find new ways to create. And one hopes it will help find new audiences as well, whether at a festival, pool or art museum.

Something NEW by Ate9 from Danielle Agami on Vimeo.