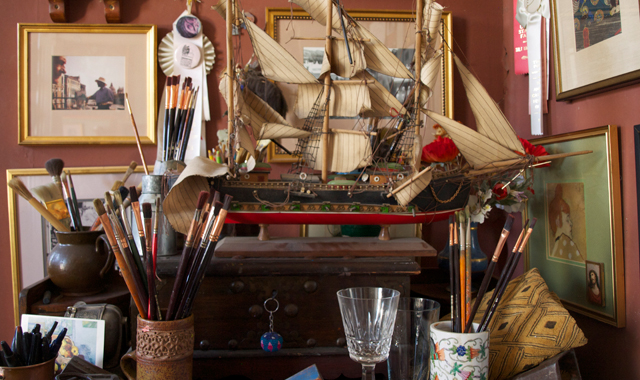 Randall Lake’s first studio in Paris on the Rue de Grenelle was near the Eiffel Tower. He describes it as the size of a maid’s room, with no natural light, in a seven-story walk-up building. When Lake came to Utah in 1973 to study with Alvin Gittins (and decided to stay) he found a studio at the Guthrie building in downtown Salt Lake City. He still works there today. It has four rooms, making it more than four times the square footage of the ‘maid’s room’. And it’s a good thing, too. Those four rooms are as rich and colorful as his current paintings, which will be on view during his Studio Show beginning October 10th.

Over the past forty years in the studio, Lake has  gathered a fascinating and eclectic collection of objects and fabrics, some of which you might recognize if you have followed his work, or might see in a future painting. ‘‘Everything I get finds its way into  a painting,” he says.  Antique ink wells, clocks, globes, Chinese vases and furniture compete with scales, masks, Sevres porcelain pieces, a chest crammed with a beautiful assortment of fabrics, and what looks like an apothecary chest, that he “… hauled back from Hampton Court in London.”

Once an annual event, almost a decade has passed since Lake has opened his studio to the public. In anticipation of the October show, the artist gave us a tour of the space (during which we also got sneak preview of works that will be in the show). He pointed out a teapot from Borneo he got in Vancouver’s Chinatown sitting next to a Sevres pot. On one wall there’s an old map of Edo (before it became Tokyo) that he found in Berlin. He rummaged through a cabinet to show us a Mbuti pygmy tribe cloth from Kenya that he found in Paris. “It reminds me of Cezanne,” he says. While at his home in Spring City, Utah, he found a set of 4 porcelain plates, most likely part of a child’s tea set, at a yard sale. They were made by Porcelain Haviland in France. He got them all for a dollar. Even a closet door in one of the studio rooms has a story: commissioned to paint a mural on the bathroom ceiling of a private residence in Salt Lake City (the mythological figure of Paris (or Alexandros) and the downfall of the city of Troy was the subject), Lake used the door to practice the techniques he would utilize in the mural.

Lake says he was the luckiest man alive when going through customs during his travels.  “I’d get a steamer trunk in France or Italy and just cram it with stuff. If they had searched just the top layer, what was there might have exceeded the $400.00 limit. They never even looked.”

You too will feel lucky if you are able to attend the opening reception for his open studio which runs from 6 to 10 pm on Thursday the 10th (On Friday, Saturday and Sunday, the 11-13, the hours will be from noon to 6pm). Guthrie Artist Studios is located at 158 E. 200 South. Lake’s studio is on the top floor.