Stories of Trauma and Support in SALT’s “When I am Lost, We Speak in Flowers” 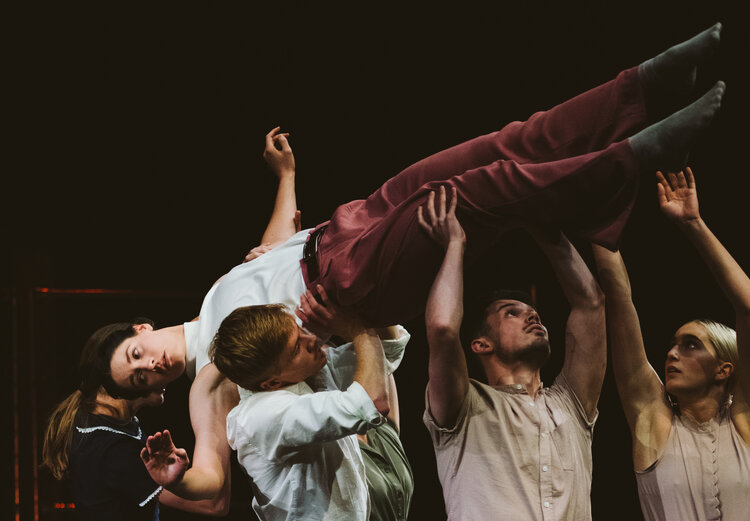 Photo of SALT Contemporary Dance in When I am Lost, we Speak in Flowers by Jake Eveler.

SALT Contemporary Dance premiered co-founder and artistic director Joni McDonald’s When I am Lost, We Speak in Flowers, beginning a three-weekend run at the Eccles Theater’s Regent Street Black Box. The audience entered on the heels of one of the last warm evenings of the year, through the still, quiet lobby, to join a sparse, quiet crowd. The performing area was littered with the heads of flowers and backed by two sections of chain link fencing as well as the theater’s tall glass windows that look out on the McCarthy Plaza. Everything was bathed in a glowing blue, the same as that used perennially by photographer Chad Kirkland for his gorgeous portraits of SALT company members.

Hot tip while I’m setting the scene: anyone coming to see this show will be treated to a 2-for-1 complementary (and complimentary) art viewing – through the back windows, the recently installed Pages of Salt is visible from an eye-level perspective. The massive wave of panels by artist Ned Kahn had its grand opening just days ago, through the Salt Lake City Arts Council’s Public Art Program.

SALT’s six dancers began seated in a line in front of all this with their backs to us as McDonald, who danced in, as well as choreographed, this concert, walked in with a large bundle of additional flowers. The sound of chatter from a crowded room came over the speakers as they began. The group moved smoothly in unison, gliding through gesture and a series of overhead lifts with an unshakably sedated calm as the intensity of the recorded voices peaked and gave way to a humming choral composition by Andrew Maxfield.

The structure turned here to a long series of duets aimed at “find[ing] the collateral beauty inside the struggle.” Most duets suggested the processing of trauma by, against, and through the dynamics of isolated romantic heterosexual couples in traditionally gendered archetypes. We saw a slowly drained and forsaken woman and her wandering-eyed man; the endlessly supportive muse and a man who just couldn’t stand up on his own; puppet-stringed tangling; a moment of abrupt, unexamined violence; and a group of women consoling one another, each subsequent duet laundered through the hammered smoothness of the company’s trademark movement style.

It’s a smoothness that, purely as a quality of movement, is clearly desirable and beautiful to watch. The dancers of SALT are trained to move like an unstoppable liquid force, technically brilliant, pouring seamlessly into each successive and intricate phrase. At times, though, it is an aesthetic preference that feels a little bit lost — not finding its purpose within the narrative it constructs, steering content toward its own prefigured destination rather than the other way around.

The most memorable scene of the evening came during a solo by Aubry Mason. Her portrayal of a long slide into a looping snare of dissociative hallucinations and paranoia was an extremely affecting and nuanced performance. Her movement spun like an uncoiling chain, and her interpretation both employed and transformed the smooth, seamless liquidity, unraveling it and filing it to a point.

When I am Lost, We Speak in Flowers portrayed stories of trauma and support, was danced beautifully, and ended with a long, held gaze at what the dancers constructed from the eponymous flowers. The message was simple and total: from tragedy comes beauty. Beauty is the goal, comfort in others is the way. What was less clear is how SALT may feel about the operational particulars of its promise, or premise — why or how “beauty” grows, what finding it may do, what it doesn’t do, what does or does not count for it, what happens when it can’t be found, who gets to find it, what else can come in its place, and last but not least, why is it what we look for?