With our “Still Here” series, we are checking in with members of Utah’s art community to see what the past several months has meant for them. Jim Frazer studied painting with Fairfield Porter while an undergraduate at Amherst College, after which he studied photography with John McWilliams while in graduate school at Georgia State University in Atlanta. With colleagues from Georgia State, he helped to start Nexus, a non-profit photography gallery that later became The Atlanta Contemporary Art Center. He was the first photographer to have a solo exhibit at Atlanta’s High Museum of Art, and his hand-colored photographs of Southern landscapes were widely collected and exhibited both regionally and nationally. In 1999, he moved with his family to Salt Lake City. After that move, he branched out from photography to a diverse practice that focused on mixed media works and collaborative installations. His newest work, though not appearing photographic at first glance, is nevertheless photo based, deriving from images of details taken from the natural world. 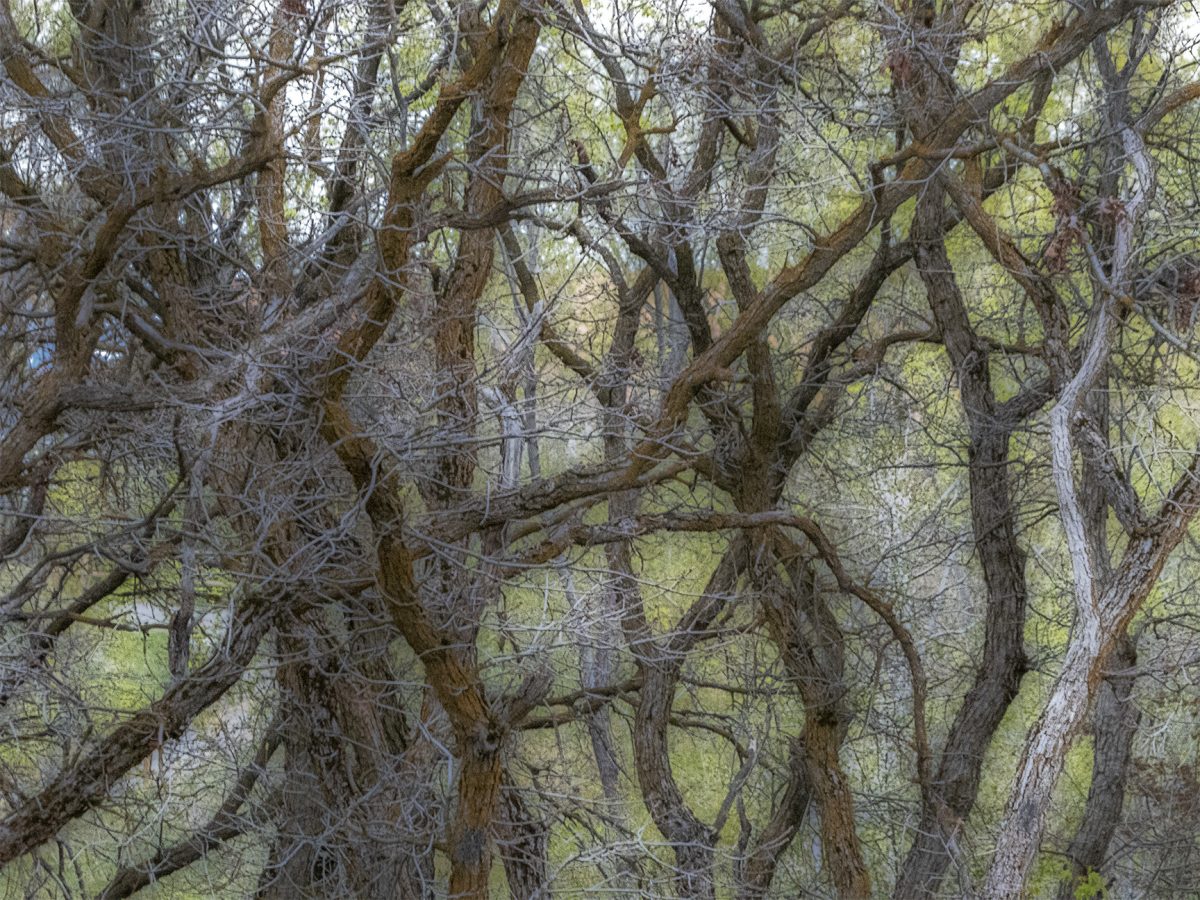 “When I started isolating because of the pandemic, I was fortunate to be working on a commission, so staying at home and working for a while seemed like a good idea. A while turned into a very long while. The commission was finished and installed by others braver than I. Thanks to grocery delivery, it was the middle of June before I went anywhere other than on daily walks. It turned out that those walks became sort of a centerpiece of my life, still continuing. Every day, in the hour or so before sunset, I have been walking to and around a nature preserve near my house, and photographing. It’s a good place to keep my distance from others and even experience what feels like a kind of immersion in the world of fields and trees, sticks and leaves.

Even there, I’m conscious of who might be approaching so as to be able to move aside when someone wants to pass. At first, when I would step off the trail to avoid being passed closely by someone, I was just looking off into the bushes, looking busy with the camera so it didn’t seem like I was just hiding. After staring for a while, though, sometimes the jumble of limbs and twigs seemed to organize itself. Maybe it was still complicated, but things fell into place and I got the feeling that though nothing had changed, I was now seeing what was really there all along. The complications of the underbrush became a metaphor for the complications of current life, and the experience has become the focus of my artwork over these months.

Another refuge from everything else going on has been watching videos of lectures on physics. It’s something I was doing anyway, but I’ve become more immersed in it recently. Since the pandemic has cancelled in-person conferences, they have gone online, which means that it’s possible to see presentations that would normally not be available to the public. Seeing the work that people are doing almost in real time rather than a year later, when it’s published, is a treat. It really relates to my walks in the woods, too. As one of the participants put it, ‘We’re trying to see what’s going on inside the box that is nature.’

Having this focus has really been saving, it’s been a soothing distraction from anxiety. At first I was sure that anyone nearer than across the street was surely going to infect me. I still count myself among the extremely cautious, but I have come to feel a bit less terrified. I went so far as to speak to a friend who happened to be walking in the same area, who introduced me to her friend and so now under the most improbable of circumstances, I’ve embarked on a new relationship. This would be wonderful anytime, but especially now, I feel very thankful to have the privilege. I told myself at the beginning that my goal for the next year was to stay alive, and that anything else would be a bonus. By that standard, I’ve gotten some great bonuses and so am feeling very grateful to be still here.”