With our “Still Here” series, we are checking in with members of Utah’s art community to see what the past six months has meant for them. Salt Lake City artist Claire Taylor holds a Master of Science in Environmental Humanities and a Bachelor of Fine Art in Visual Art with a Printmaking Emphasis from the University of Utah. She has held artist residencies at the Natural History Museum of Utah and the Utah Museum of Contemporary Art. Her work is held in public and private collections nationally and internationally, and she was recently featured by the Utah Office of Tourism. She is a Special Project Assistant for the Salt Lake City Arts Council. 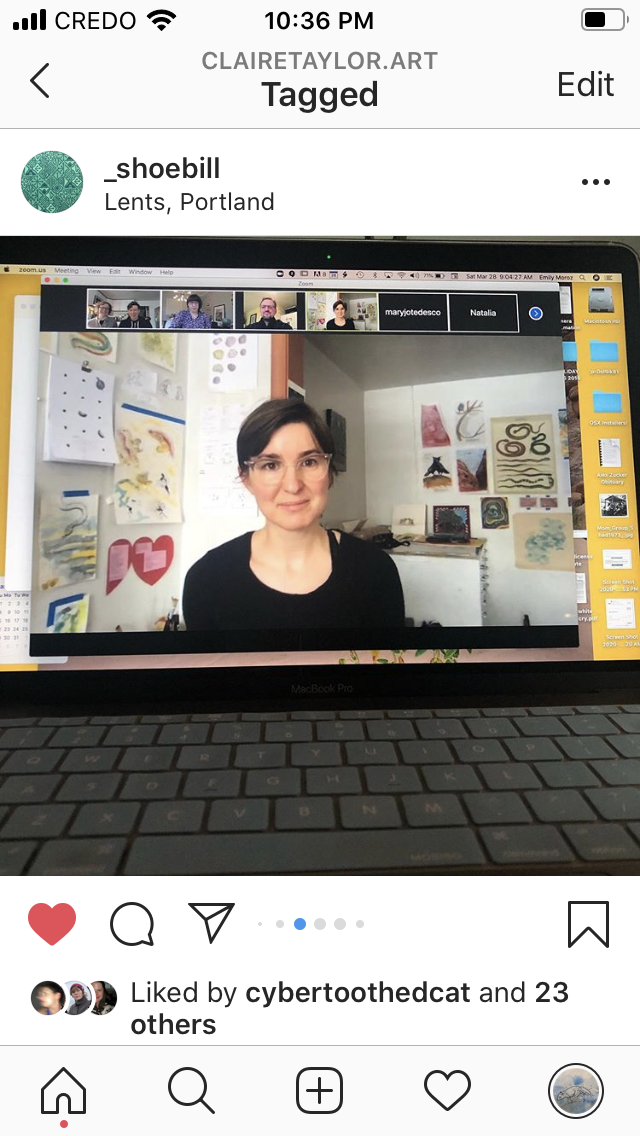 As a freelance artist, illustrator and educator, Claire Taylor had a lot of work canceled when things shut down mid-March. Financial concerns were compounded by health concerns: “In late March, I gave an artist talk over Zoom for the Utah Society of Environmental Education while I was very likely sick with Covid-19,” she says. Back when testing was scare, she didn’t qualify, but her family members who did qualify received positive tests.  “I had symptoms parallel to my family’s, contracted my illness from them and have later tested positive for antibodies. The county traced our family’s contraction of the virus to the Sundance Film Festival. At the time, I quarantined and waited to send out art sales. I was fortunate to have a light case of Covid-19, but my sense of taste and smell has since been altered. A dusty-oniony flavor graces some of my once favorited foods.”

“I slowly created a painting about my experience with the Magna, Utah earthquake, isolation, letting old selves die and the transition to new universes. I revisited a painting I had started the previous year. It was a plein-air painting of City Creek Canyon, which I had worked on in the in between times of a teaching artist residency and illustration work. In revisiting the painting, I allowed personal mythologies to inform the direction of the work and sought to find beauty in the mundane.” 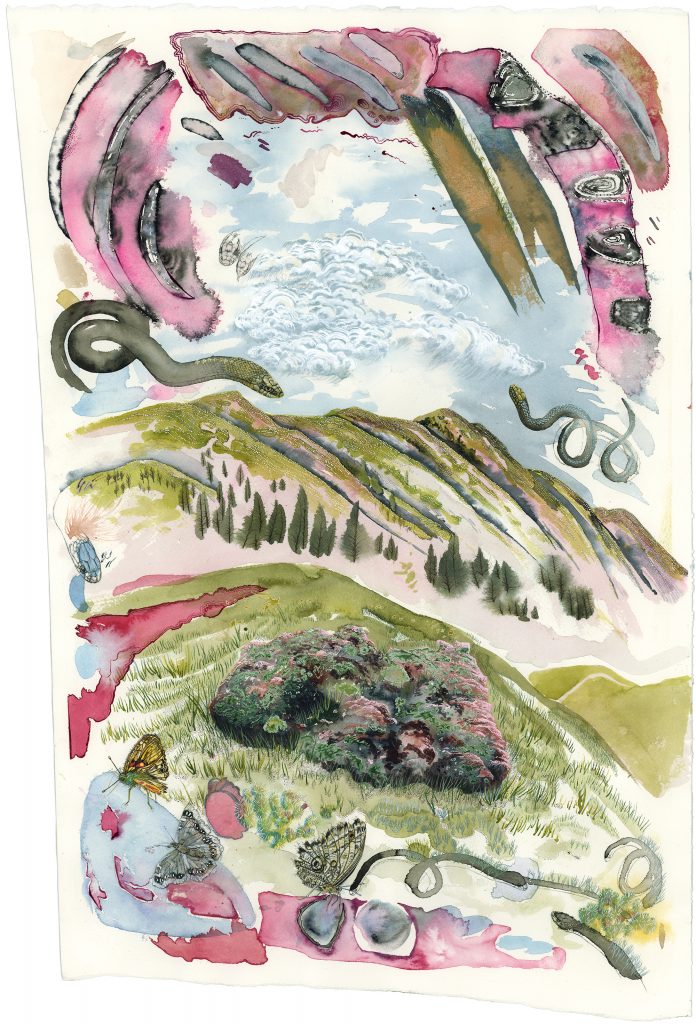 Financially, Taylor was saved by several art sales in late March and early April —perhaps, she says, from kindly people knowing she would be struggling — and later qualified for CARES funding and an artist grant. “I know others who didn’t qualify,” she says. “I am understanding more that I don’t see what privilege I have.”

After the murder of George Floyd, she realized her privilege even more and attended Black Lives Matter protests. “Things that mattered so much to me personally seemed to matter less. I realized how much I frame events around myself. I realize that I am still doing that now.”

Qualifying for funding, while having so much work canceled, opened up time for Taylor. She stared at the news, wandered her deserted neighborhood streets, noticed things she hadn’t noticed before. She held art raffles benefiting Covid-19 mutual aid funds (donation links provided below) and says she was humbled when she learned that some friends, who had not been financially affected by quarantine, were donating their stimulus checks to such causes.

She also created work. “Early on in quarantine, an internet acquaintance suggested we collaborate. At first I said I didn’t have time, as I was still planning to create a body of work for a solo show originally scheduled for December 2020 (now postponed to an indefinite future date). Then I questioned why I was holding back in uncertain times and agreed to collaborate. We started an illustrated story that built upon itself as we painted; we captioned each other’s paintings. Our story was about seagulls, moths, thought clouds & ominous clouds and a fox calmly walking away from what looked like a looming existential crisis.”

Torrey House Press contacted her recently to illustrate their latest book, written during quarantine about quarantine by Amy Irvine and Pam Houston — Air Mail: Letters of Pandemics, Politics, and Place. She’s also illustrating two of Ken Sanders’ poems, “one of which,” she says, ” is about the existential maze we all find ourselves in right now.” The other is about the passing of beat poets. “I’ve done illustration work for Ken in the past and enjoy the artistic freedom he allows in his commissions.” 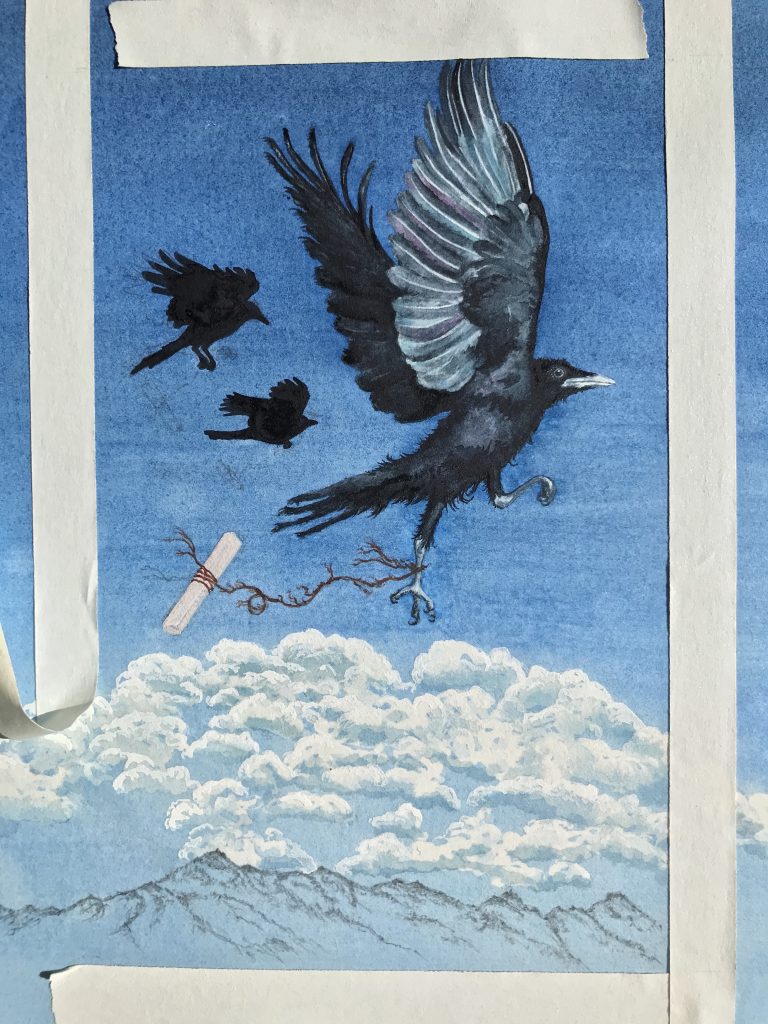