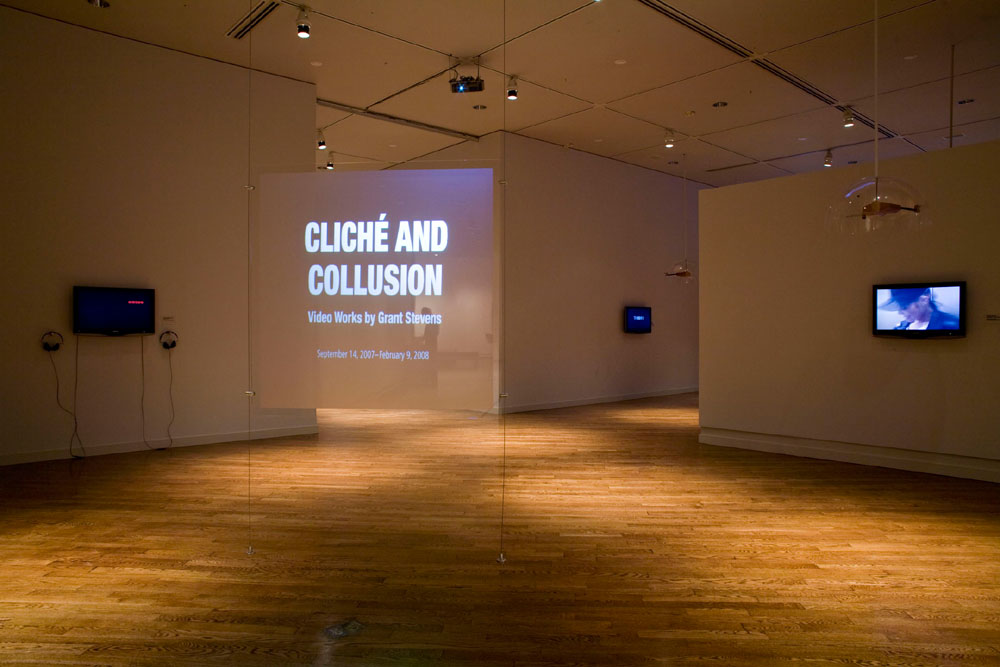 When art addresses topics on a conceptual level, the concept becomes the subject of that art. In BYU Museum of Art’s exhibition Cliché and Collusion: Video Works by Grant Stevens, the subject is mass media and the many questions associated with mass media. This is a widely discussed topic today, a very relevant one with relevant issues such as: how are we as a society affected by the media? how is the contemporary mentality of our society a product of the media and how are we manipulated by what we see on TV, the news, newspapers, magazines, the internet, radio, advertisements, etc…? Mass media even makes us question what is fact and what is fiction. What we come to believe as truth might be a product of the overpowering influence in society which uses the media for profit. How do these ideas affect the thinking of society? The implications in this exhibition need no in-depth analysis here. They are familiar and widely discussed topics.Stevens uses a series of video works with titles such as “Think Right Now” (2005), “Learning Your ADD’s” (2002), “When There’s Love” (2005). Topics addressed, using various “demonstrations,” are those such as one would find in a 101 lesson on semiotics — the relationships between viewer and viewed, between the signifier and signified. How do the various tools of the media which we see every day affect how we think? “Think Right Now” demonstrates how much we don’t think when bombarded with signs and slogans. A blank screen flashes texts: “Own a Hollywood Smile!” “30% Off!” “In Debt?” “Feeling Lonely?” “Stop Worrying,” “Power, Performance, Value!” “Free!” and “New and Improved!” The viewer is assuredly familiar with these phrases. “Learning Your ADD’s” — again, on a blank screen — flashes a montage of anachronisms such as CSI, NBA, SUV, FBI, CNN, NBC, etc, revealing just how ADD we as a society truly are as the effect of flashing montage is not only banal but bears the quality of channel surfing. And “When There’s Love” finds the participant in a large dark room, with lighted phrases of incredibly dull endearment, such as found in popular love songs, with which we are uncannily too familiar. And this uncanniness is complete with the Righteous Brother’s “You’ve Lost That Lovin’ Feeling” and the lights of a disco ball equally as banal. These installations focus on questions and topics that are continually addressed as we struggle with the media-frenzied, propaganda-motivated, ideologically-driven machine we find ourselves living in.

So where are the answers to be found? How is the riddle of mass media to be solved? In Stevens’ exhibit, we are taught to think outside the box, but it is this box that is telling us this! We are told by Stevens to address media manipulation, but how is he doing this? He is using media to question media. He uses his “own” agenda and propaganda to question the agenda and propaganda that runs this machine, which we are all supposedly slaves to. Art itself, apparently, is not innocent in playing a part in the mass-media machine! 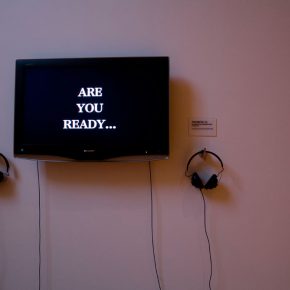 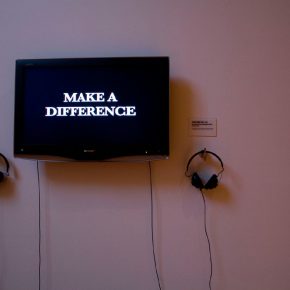 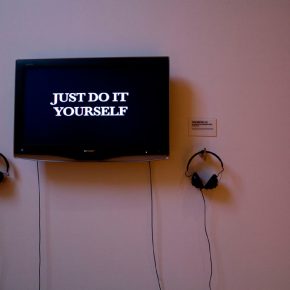 In an article I wrote for last month’s issue, I spoke of something I called “transcendental art,” which I observed at the Woodbury Art Gallery’s Invitational exhibition. That exhibit gave me great hope for the state of contemporary art. So that the reader does not have to delve into last month’s article, in short I discussed what I saw as a contemporary phenomenon of “transcendental art.” Art has the power, as I saw at the Woodbury, to have an “open narrative,” to be seen by the many but be seen by the one. In the review of the Woodbury I wrote how I had seen art which had qualities to be looked at by a mass audience, but for a plurality of meaning to be derived from a single art object which allowed for one individual, as I candidly saw at the exhibition, to react differently to others at this exhibition. The final cycle at the Woodbury illustrated this very well: how most, viewing that particular room in the gallery, Layers I, II, and III, could find something individual for them, a feeling, a thought, a memory, a moment, an emotion.When writing that article I wondered if this idea of contemporary art that I had seen at the Woodbury was universal today or specific to the art I saw at the Woodbury show. I see now that it is not universal today, as Steven’s was not, but still is highly prevalent in today’s art world. I see after the new exhibit at the BYU MoA how powerful this idea is. Stevens’ work was not bad art, but one might compare it to something by Bill Viola. In viewing a Viola, one swims in one’s own thoughts. Two individuals watch the same video and have entirely different experiences, a plurality of meaning. For much of the 20th century art has been didactic, a “modernist directive.” Art need no longer be didactic. The comment was said about the Stevens’ work, “It was so engaging!” But isn’t all art supposed to engage, to incite. But art does not have to be didactic. To be didactic keeps art inside the box. It keeps the machine alive. Art can be political or have a particular purpose, but art today also has the power to be free of the mechanisms of society, and in its transcendence, not patronize but allow for a flow of meaning.

To avoid sounding vague, I will use the work of Viola as an example. His recent piece at the University of Utah Museum of Fine Arts introduced to the viewer a continual narrative cycle, one which the viewer could enter the installation room at any given moment and have an equally powerful experience. Viola’s piece defies description, but it was of five figures, apparently reacting to a certain event, each conveying certain emotions. Unlike many video artists who question the role of subjectivity and end up with objectivity in their preaching, Viola introduces the viewer to something sublime, something which is completely open, infinite, and intangible, yet allows for this plurality, this free flow of meaning. In this it is not we who are the subject but we who create the subject, it is we who give the piece its meaning. The piece allows the viewer to reflect, ponder, feel, remember, journey, wonder, think. It does not do those things for us.

It is a refreshing product of art today — that it is freed from the textbook — and we need no set of instructions, no guide book. Today’s artists might be the exception to the media machine and allow the viewer to be engaged but not manipulated. Artists such as Viola, and that which could be seen last month at the Woodbury, allow for an experience where the work is not in a diatribe found in the artist’s mission statement but in the asking questions and not answering them, opening dialogues and discussions and truly engaging the viewer; in allowing the viewer to be freed into their own subjectivity — not preached to, patronized, manipulated. The work allows us to think outside the box rather than being given a directive to do so. 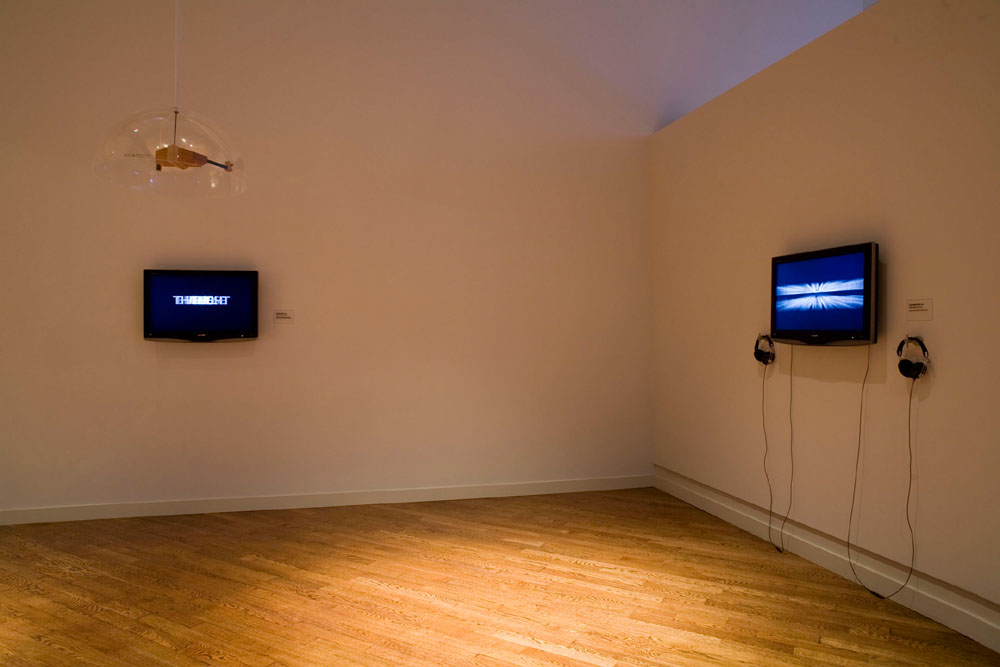