The Eye of the Beholder: Actual and Alternate Awards at the Spring Salon 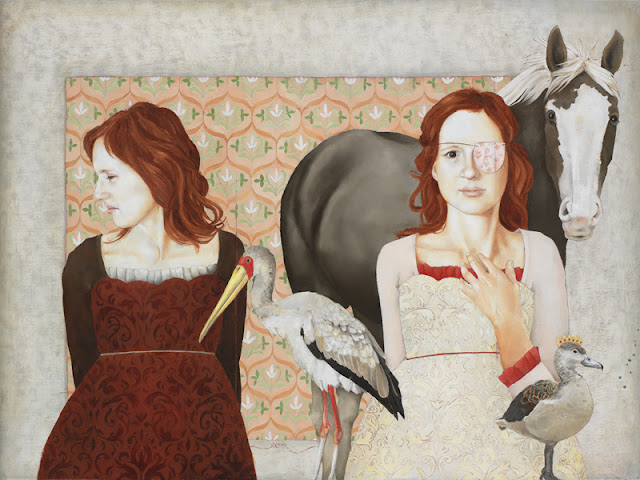 The Two Travelers by Emily McPhie

I’ve been in conversations where artist friends tried to figure out the best way to get into juried shows. I was surprised to learn it’s not simply a matter of what they consider to be their “best” work. Eager to get into prestigious shows, and hopefully win an award they can put on their CV, artists will create a strategy for each exhibit. Some will investigate the jurors, to see what their professional interests are or what work they’ve chosen for past exhibits. Size is another consideration. Should an artist go small, hoping that their work will better squeeze into limited square footage? Or should they go big, to show off their skills and make an impression? At this year’s Spring Salon, going big seems to have been a smart move. At the Springville Museum of Art there are plenty of medium-sized and smaller works, and if your aim was simply to be accepted, minimal might have been a smart strategy. But when it came to awards, works that can be measured by the foot won out.

Since I reviewed last year’s show, it might be helpful to relate this year’s review to it. Interestingly, this year’s exhibit had the same number of works accepted (253) though fewer were entered. Since this year the museum was able to keep everything on the main floor, overall the entries must have been smaller, or the display tighter. The large pieces, sometimes three or four times the average size, certainly stood out. Greg Stock’s award-winning “PM Thundershower,” full of electric blues and vibrant brushstrokes, dominates the first room you can see when entering. As in years past, this gallery is dominated by landscapes. In fact, the format and layout of the Salon hasn’t changed. To the right of the entrance, a room of figure-related works. To the left, as mentioned, landscapes. Abstract and non-objective works are tucked into the back gallery (which makes it easier to simply duck your head in and move on if you don’t get what is going on there). The eclectic central gallery houses some of the most interesting works, and a mix of prize-winners is in what used to be the Museum’s entry gallery. Photography was once again relegated to its own hallway. 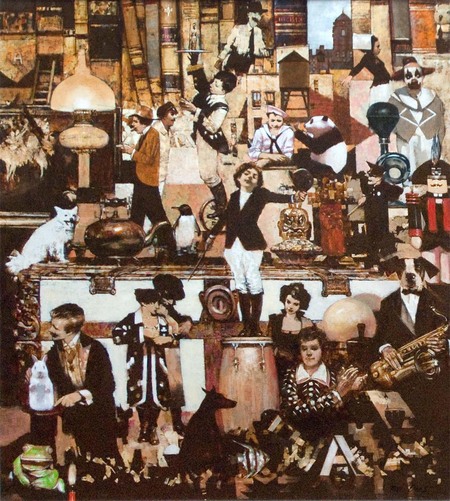 With a few exceptions new media, installation, fiber art and other “non-traditional” forms were again absent from the Salon. The two exceptions: Vance Mellen has returned. Again, “The Tornado” includes video, rather than is one. Into a large black and gray abstract surface the artist has embedded a stylized video component of a tornado approaching and then confronting a power line. Bryan Evan Hutchison’s “Final Stop,” which shows the view from within a passing subway car as it arrives, on an endless loop, at the line’s last stop, is a straightforward video piece. But for the most part, the types of artists who get into and win exhibits like the CUAC’s annual Utah Ties exhibit are absent.

Obviously, it’s impossible to tell to what extent an exhibit’s selections are skewed by the artists (who do or don’t submit) or by the jurors. Looking at the award winners, though, it’s evident that the tastes of most of the staff and jurors are solidly Utahan: an appreciation for painterly craftsmanship with a tendency towards realism. 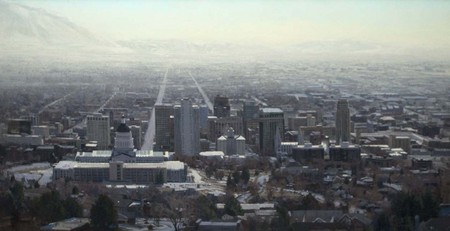 The first place jurors’ award went to Brad Aldridge’s view of Salt Lake City on a winter afternoon.|1| The vantage point is Ensign Peak. The painting takes in most of the valley, and the Capitol and downtown high-rises occupy the foreground while Main Street and State Street take the eye along a traditional perspective line to a hazy, slightly inversion-laden distance. Aldridge’s attention to detail is admirable and his brushwork creates a crunchy atmosphere that mimics wonderfully the frozen white that blankets the city. That his authentic view of the city is one that most would not like to hang above their couch (how many of us like to remember what Salt Lake looks like in January?), adds a certain intrigue to the piece.

Other awards went to longtime Utah favorites: Gary Ernest Smith for a classic cows-and-barn scene with a subtle attention to evening light;|2| Paul Davis for a monochromatic menagerie of literary figures (yes, it sounds like the mural above a Barnes and Noble café, but there is much more wit and better painting here),|3| and Lee Udall Bennion, for a classic evocation of the joys of rural living.|4| Deon Duncan also picked up an award for her detailed sculpture of a triathlete,|5| and Sallie Clinton Poet, who I usually associate with religious art, won for an abstract landscape.|6| 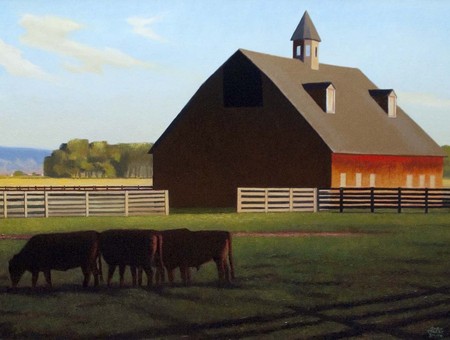 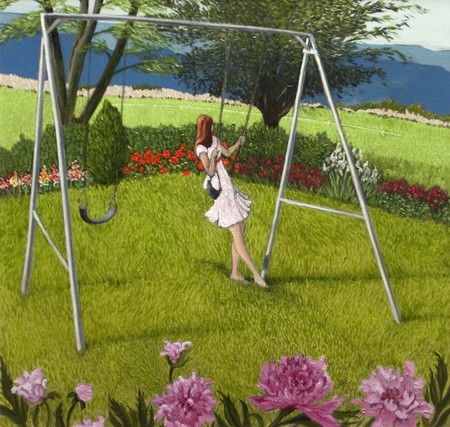 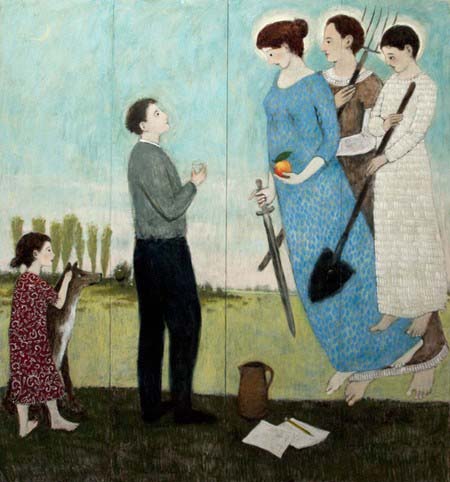 The staff’s tastes, represented by the six awards they gave, don’t diverge greatly (and seem to pre-date 1950). Vern Swanson gave his director’s award to Matt Larson’s “After the Party,” a large horizontal portrait of a woman reclining on a couch.|0| The type of painting Larson is doing is frequently referred to as contemporary classicism, which resembles the informal style of painting that was common at the 19th-century French Salons. Because painting fancy dress and headgear is interesting, a common pitfall for the genre is the tendency to create nostalgic scenes of a bygone era. Larson’s painting indulges the aesthetic tendency without falling into the trap. The title’s reference to a “party” explains the contemporary girl’s poofy black dress, and the blue dash of a headband. Meanwhile the tension in her legs and her pensive look invite the viewer to create their own story of what happened “at” the party. 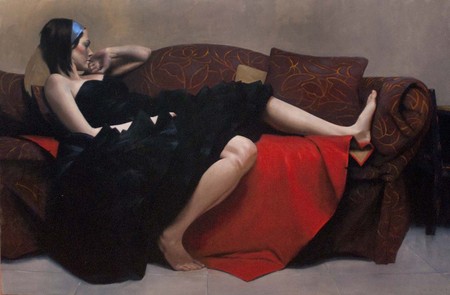 After the Party by Matt Larson

Jeffrey Pugh, who was the first-place winner last year, was passed over by jurors Mark Magleby and Lila Abersold, but Jessica Weiss, the museum’s Associate Curator of Education, gave his “AFC” her ribbon. Because of the painting’s static, centralized composition, I prefer Pugh’s also-accepted “Barn Storming,” but since the barns and cows of that piece reminds one of the similarity of his style to his father-in-law’s (Gary Ernest Smith), it was probably best not to call attention to it with an award.

Brian Kershisnik’s “Unknown Allegory,” a large work that dominates the central gallery, won an Associate Curator’s Award.|7| It has all the elements you love in a Kershisnik: a pastoral setting, angels, a father, a daughter, a dog; and symbolic objects like a sword, fruit, pitcher, pen and paper. What does it all mean? Maybe the artist doesn’t even know, but he does know that the viewer is curious. To tease them he has placed a doorknob in one of the painting’s four panels, suggesting the answer is just beyond if you dare to open the door. I was tempted to do just that, but the museum’s “Why Don’t We Touch The Art” signs were enough to keep me in check.

Another piece that I had troubles not touching was Edie Roberson’s “An Absurd Board.”|8| She is such a fine trompe l’oeil artist that even close up I couldn’t help myself from touching a part of her painting to see if it were a pasted rather than a painted element. 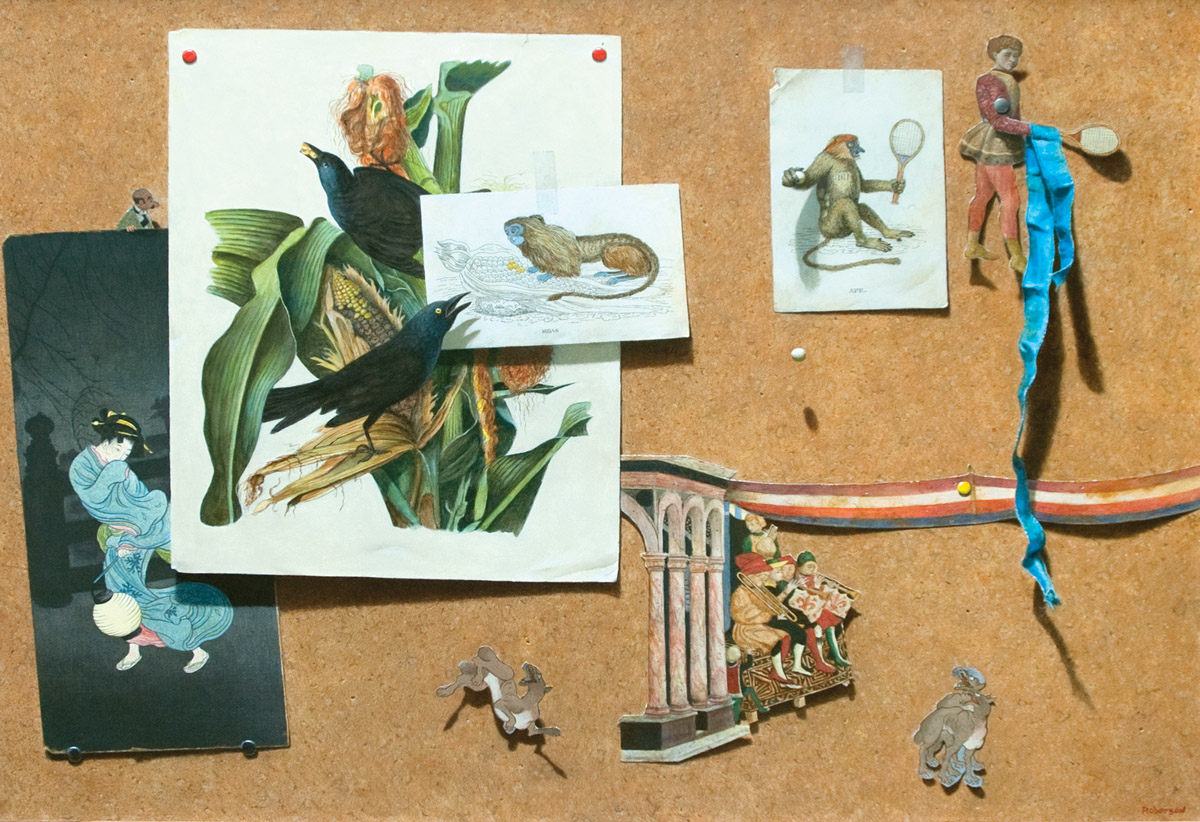 An Absurd Day by Edie Roberson

Though there were many fine pieces in the abstract room, I didn’t find any award-winners. In there, Jann Marie Nielsen’s “Perfect Day Hwy 6” is a good case of why the museum’s attempt to manage the size of their show by categorizing work is problematic. From the blue and white upper portion of the painting, which calls to mind a cloudy day, to the earth-toned strip at the bottom, the painting is obviously a landscape, and could have easily appeared in the other rooms.|9| If by “abstract” art the museum means to suggest work that is “abstracted” then Nielsen’s placement is appropriate enough (though technically all art is ‘abstracted’ and so the term is meaningless), but if they mean non-objective, like Darryl Erdmann’s large “West Valley,” or Helen Snelgrove’s concrete wrapped on a stick, then it doesn’t belong here. What is out of place in this room no matter which definition you assume is Scott Thomas Filipiak’s “Sundance 360,” a nothing-but-realistic photograph hung in the round so that you stand inside of it and spin yourself around to view it. Observe its poor craftsmanship and you might wonder if it belongs in this exhibit at all. 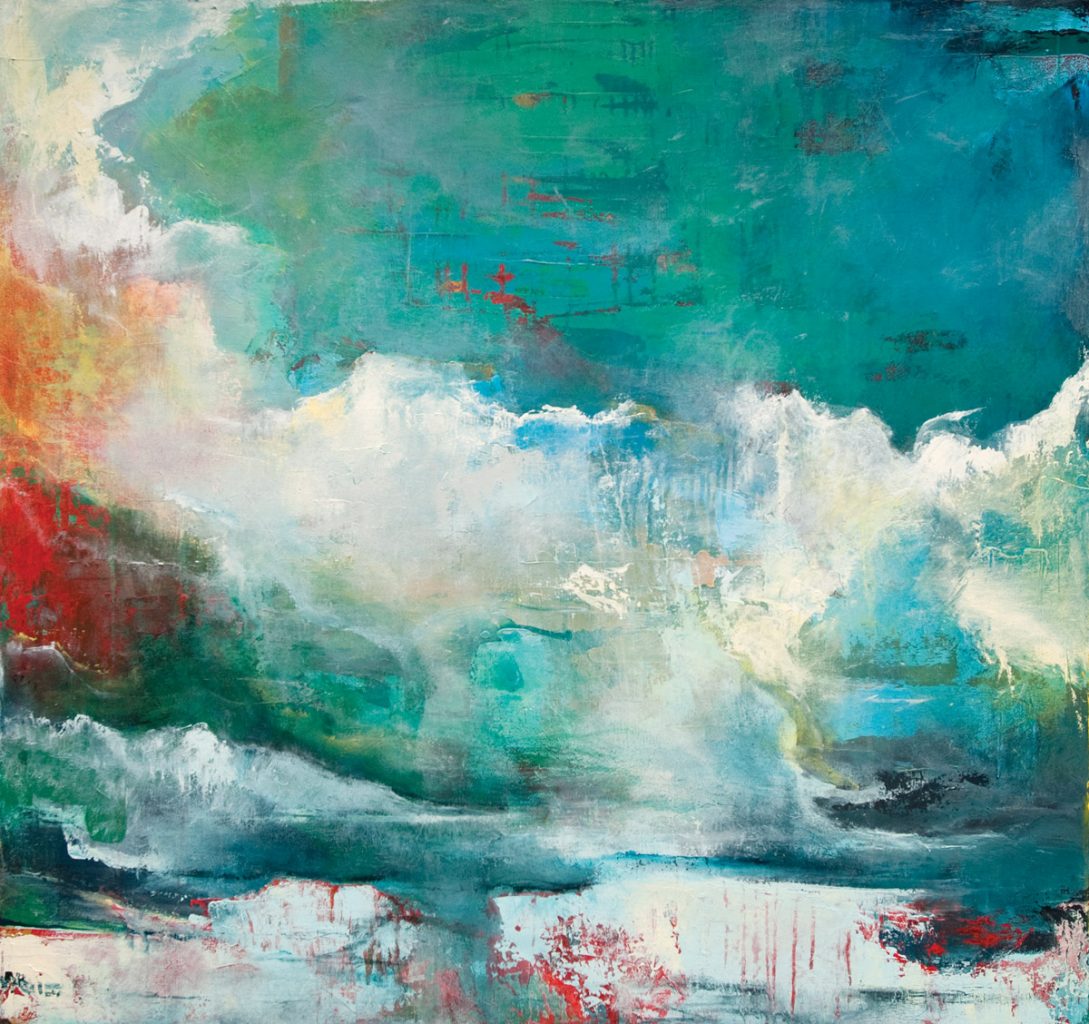 It’s an easy thing to criticize. It’s a completely different matter to jury, as a friend pointed out to me as we went through the show. “Well, what would you choose?” was her response to my grumbling. To appease her I’ve provided a few of suggestions for alternate awards.

David Meikle’s view of a Bryce Canyon or Kodachrome Valley scene (it’s “Color Country” title is unspecific) won the Assistant Director’s Award. For my ribbon I prefer Bob Marshall’s landscape in the same room. After seeing so many water scenes from the former BYU professor it was refreshing to see this dried-out view of the desert. Called “Snow Canyon Dusk,” the colorful canyon actually appears only as a butte in the distance.|10| Whereas the success of Meikle’s piece is in large part because of the grandeur of the fully lit scene (within the eroded formations that fill the canvas there are also two arches), Marshall’s scene is fairly mundane. It is his feathery brushstroke and the orchestration of secondary colors that makes the work worth notice. 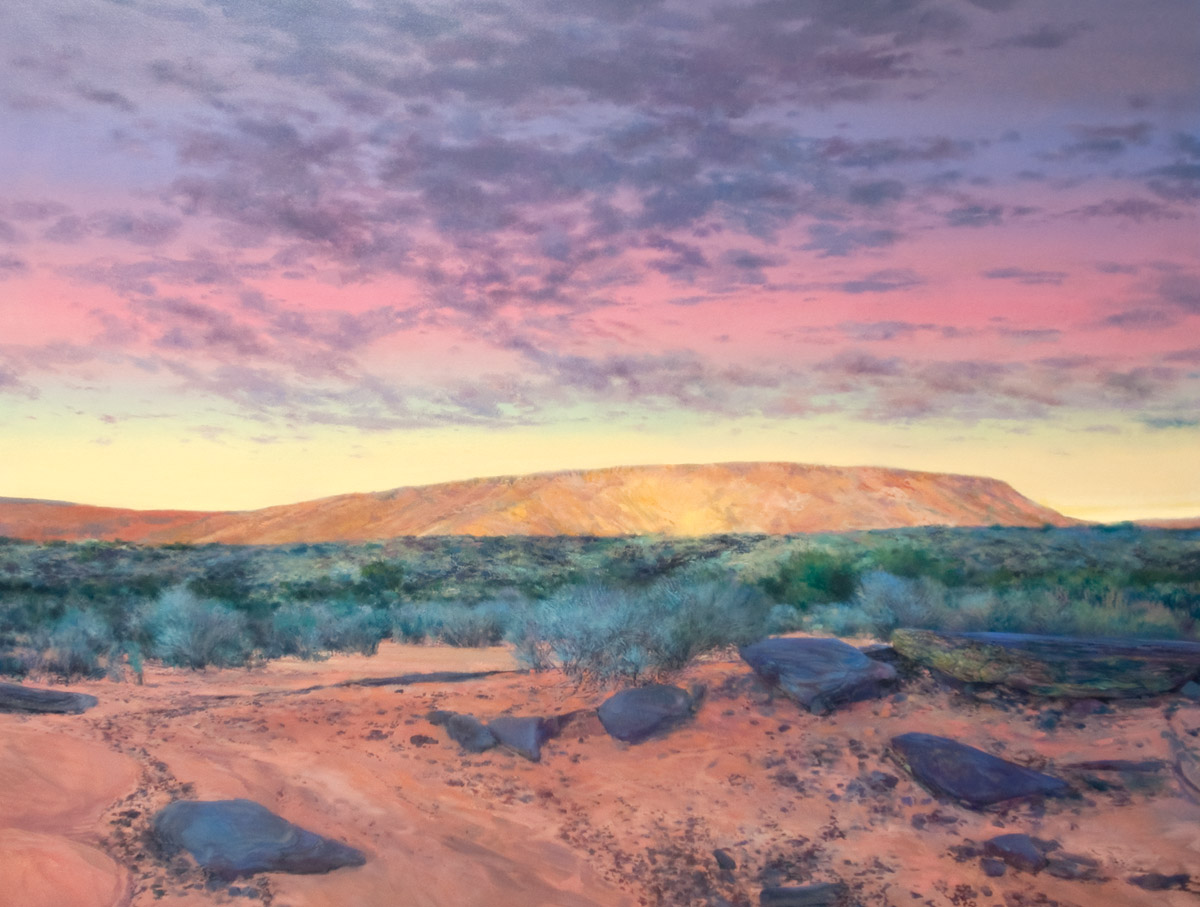 I mentioned Edie Roberson’s work and I certainly think she is the best painter in her genre. Also worth mention is Vincent Cobb, whose “Stacked Boxes” won an Award of Merit and got to hang in the room with most of the prize-winners.|11| He’s a young painter, but the size and execution of his work shows he’s ambitious and I think he could have been nudged higher in the awards list. As an alternate to the folksy feel of prize-winning pieces like Kershisnik’s or Bennion’s, take a look at Ryan Buffington’s “The Sail,” where a woman standing in the bed of a tire-less pickup stretches out a blanket in the billowing wind.|12| His large work is hard to miss, but if you’re willing to pay attention to the smaller pieces, Emily McPhie’s “The Two Travelers”|13| and Heather Campbell’s “Enlightenment”|14| shouldn’t be missed. Dan Toone’s non-objective “Austere,” where large and small and flat and round are kept in dynamic balance, should be a contender in the sculpture field. And if you like figurative work, Blue Critchfield’s “It Grows Back”|15| has figures as realistically rendered as any other in the show, but the metaphorical quality of his piece and changes in painting style make it much more interesting. 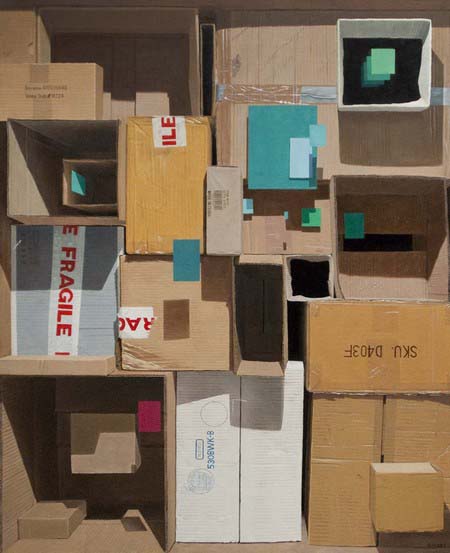 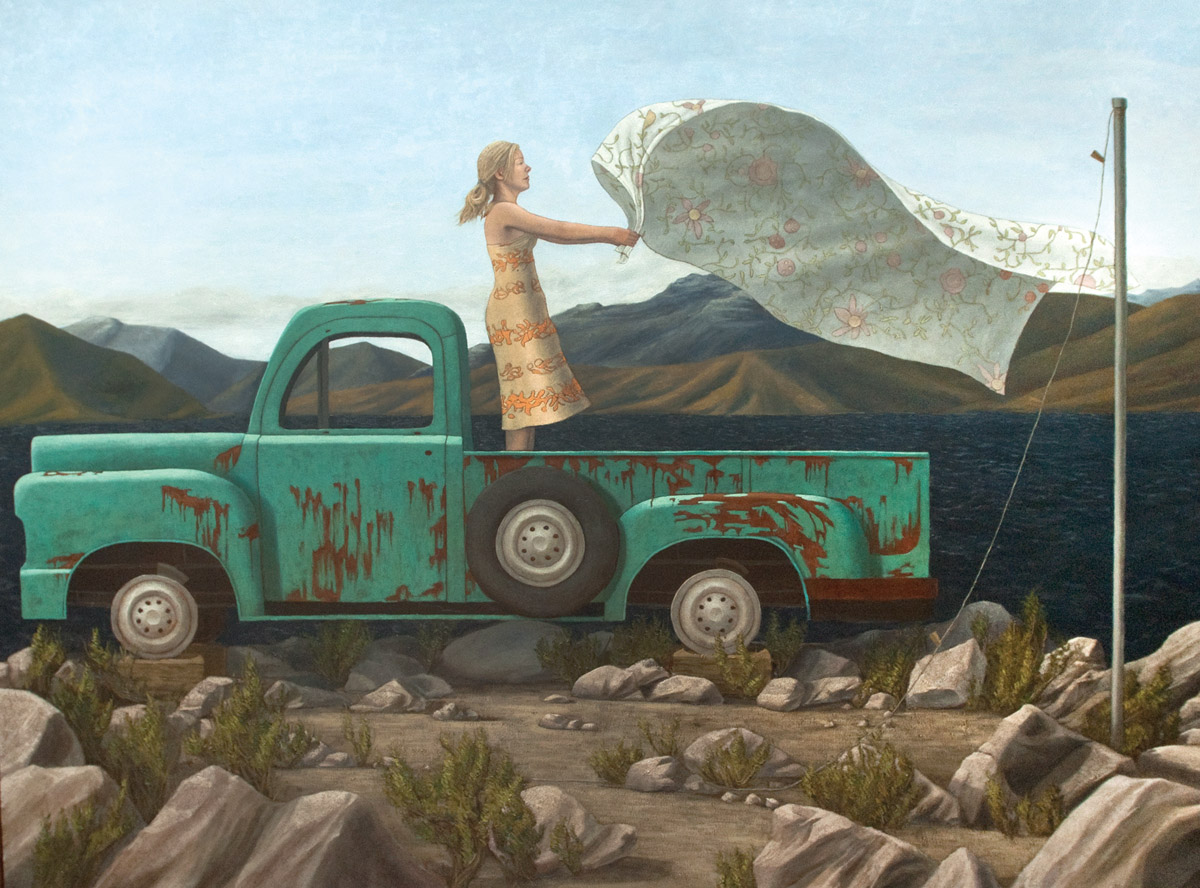 The Sail by Ryan Buffington 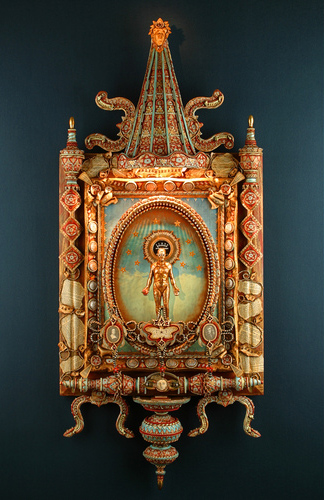 It Grows Back by Samuel Blue Critchfield

A shortlist is fine, but in the end a juror must choose a winner, so . . . Nathan Barnes’ “CNS,” which didn’t even get an Award of Merit, is my choice. I’m not exactly sure what is going on in this painting full of overlapping styles, forms and materials, but it’s definitely worth looking at. And giving the painting that front-and-center, first-place award would make sure you would. It would also nudge the Springville Salon into the 21st-century.

The Springville Museum of Art’s 88th annual Spring Salon is on exhibit through July 1.

Tagged as: Springville Museum of Art