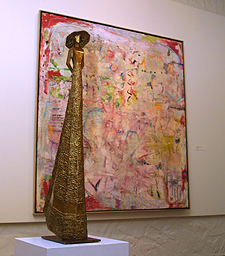 On display at the Spring Salon: La Jeune Femme by Jeannine Young and Reframing by Layne Meacham (Photos by Steve Coray)

So, a little over a week ago or so, this guy named Shawn Rossiter calls and asks if I will write something about this year’s Springville Salon and I say yes! Why did I do that? I don’t have the slightest idea, unless it was this: “Artists of Utah develops a website that has become a crossroads for Utah’s visual arts community.” (Utah Cultural Alliance E-Newsletter, May 13, 2002) “Artists of Utah” is the group Rossiter represents and I just happen to think it’s cool that these people have gathered together this way (electronically, one might say) even if an old guy like me does see it that way.

So now it is later on Monday, May 13, 2002, the day after I got my Spring Semester grades done, and I’m safely inside a closed (ever on Monday) Springville Museum of Art. (I say “safely” because I always fall asleep at the wheel when I pass BYU on the highway and never know if I will live or die on each trip to this place.) And, even more specifically, I’m now into what Vern Swanson, Springville’s museum director, calls “The Glory Room.” It’s the big one next to the front windows where all the award-winning stuff is on display during any given Salon, and these would be the “Jurors Awards,” the “Director’s Awards,” and the “Merit Awards.”

The Jurors this year were Jody Clotz-Veletes, an old friend of Vern’s now of Abilene, but for years a 19th-century art expert working in New York City, and Donna Poulton, a great friend and colleague of ours here in Utah with an excellent eye for contemporary work of excellence. Swanson’s policy over the years has been to invite one juror from outside the state and one from within, one interested in “traditional” work and the other with a greater interest in different “contemporary” forms, and one female and one male juror. So the two women jurors this year were an exception, and guess what? They worked better together than any other team Vern has seen doing this job over the years.

Further, they accepted 241 works out of 942. That’s 701 pieces “out of here;” “thanks, but no thanks;” sorry Charlene, but we found your work not good enough — — a serious venture this “How do you like me so far” art business! But “The Glory Room,” as it turns out, can make one (at least if you are an old art historian) forget the preceding carnage and find some excellent selections for awards within. An old friend’s work for one, a merit award winner called Top Hat. It is a 1988-dated watercolor on satin by Bonnie Phillips that is big (40 x 40″), and square, and filled with that kind of sweeping and rich transparency Bonnie has become known for over the years.

And next to it another merit award-winner even larger, a 2002 diptych by Clay Wagstaff, of Tropic, showing fine old poplars in each section (72 x 36″ each) that relate rather wonderfully well to low horizons beyond. Here is expansive and monumental nature becoming a kind of altar, this as opposed to the Phillips abstraction next to it so wisely drawn from our wide-open spaces in part. A good combination this, near the entry to the gallery. And then across the way there is another large merit award-winner, called Reframing (72 x 66 3/8″), done in 2000 by the color-field expressionist painter, Layne Meacham. In fact much in this show seems large in size, and I am finally told by director Swanson that I’m right to think so because in fact the entries this year have been larger than ever before. And for whatever reasons, less watercolor ended-up in this exhibition which, by the way, is the second largest in number of works ever. (The 2001 edition was the largest of all time in number of pieces, the third largest was in 2000, and .., well I think we may see a trend here.)

Sculpture? Well, I don’t know what the statistics would be for the numbers of it in the exhibitions over the years, but I do know this — — there are some real beauties in this show. For example, right in front of the Meacham is a nice and playful geometry in cast bronze by Jeanine Young. This 2001-dated piece is called La Jeune Femme (44″ high), and all I can say here is that it would have made the great Larry Elsner of USU proud to have claimed it as his own! Other sculpture? Well, this year’s Juror’s First Place Award has gone to Fall, a 1999-dated welded steel piece by Michael Hullet. It is a very tasty minimal figure (88″ high), one of this U of U-trained artist’s best ever, and something Springville ought to buy for its permanent collection, if it can.

And then, over on the other side of “Glory Room” are two really interesting developments in sculpture. Indeed, this year’s Director’s 3D Award has gone to both Black Rhino and Cape buffalo, two realistic bronzes (25″ high each) by none other than Michael Coleman, Utah’s most successful painter of western subject matter! Hey, when you got it, you got it, and this certainly goes for Mr. Coleman. As another aside, pieces by this artist and other very well-known Utah masters are in this Salon because they are now part of Springville’s “100 Most Honored Artists of Utah” who “may submit work … without a fee, and … have one entry accepted … automatically.” HEY, this may be elitism big time, but the Salons will be more representative of what’s actually being done around here than they have been for many years past, in my estimation.

Meanwhile, the Director’s 2-D Award winner is a really big (48 x 80″) Michael Workman tonal landscape called Red Mountain. And this is a very strong piece too, in its atmosphere and majestic form. What’s in a name? Well, “Michael” seems to have worked rather well this year, at least up to this point. Yet, among the other very striking examples surrounding the Michael Workman is Kathryn Affleck’s closely-worked Hog Heaven (2000, pastel, 31 1/2 x 19 1/2″), this being only one of the Juror’s Third Place Award winners apparently. Then among my own remaining favorites from the merit award group is a creation by Sandy Freckleton Gagon. It’s a still-life of a surreal kind, and I think she is really getting good! And Frank McEntire’s small bronze Lazarus, presented upon a McEntire-made wooden stand, is a fine little understatement.

Also there is an exceptionally effective collage by Adrian Van Suchtelen of USU. How somebody like Adrian, who has been so good, can be getting better is a mystery to me, but it is happening. And an oil on panel by a certain Sharron Evans of American Fork is strong in a kind of busy “Kershisnikesque” sort of way. Also a great big Tony Rasmussen red rock country piece is there (three canvasses, each 96 x 48″) that was/were once in the Olpin Union at the University of Utah, but which is/are now part/parts of Springville’s permanent collection. And one the finest Bill Whitaker pretty girl paintings I’ve ever seen is also among a number of others selected as meritorious by the jurors.

Elsewhere, works by the following artists also “caught my eye”: always effective Judith Mehr, another fine bookstore by our friend Gibbs Smith; a very appealing Stroll Through the Ages by Scott L Wallis; a sofa-sized tonalist “triptych” by Bradley Ethan Aldridge called In Seduction of Subtle Waters (Get your “Music for Lovers Only” album out!); a really good landscape by Kathryn Stats; a bronze Garden Boy, who sits on a real museum bench so nicely, by my friend L’Deane Trueblood, a wonderful and big Mark Twain by Gary Price (He’s got his own bronze bench!); a couple of David Meikle’s roadside cubist realist scenes, a David Argyle saddle (I’m wondering if he is related to Barney Argyle, the boot jack artist.); another fun clay thing by Heidi Moller Somsen, an equally effective clay thing by Rita Lambros; an excellent example of Willamarie Huelskamp’s unique work; two little jewels of watercolor by Ed Maryon; and a very deft collagelike Roman Holiday #2 by Deseret News critic Dave Gagon.

What else? Well, here’s another “news flash.” I really like this show. It has real variety, and it actually has wildlife art in it too! In fact, this exhibition does not show any tendency whatsoever to either “all-knowing mod./post-mod. preciousness” or prissy traditionalist “federal judge vision” either. That is, the jurors were looking for “the good stuff” evidently, and it seems to me they found it.

*Robert S. Olpin has been an art history professor at the University of Utah for the last 35 years. He began writing about the artists of Utah in the 1970s and, for some unknown reason, has never stopped.

Robert “Bob” Olpin was a longtime professor of art history at the University of Utah.