Over UEA weekend I took a trip with the family to the desert, and we stayed for a couple of nights at the Ramada Copper Queen Casino in Ely, Nevada. It’s an odd sort of hotel, with an open floor plan similar to many residential homes: all the rooms look out into a large central space, two floors high; the second floor breakfast nook looks over the casino area, which overlooks the pool and hot tub. One might call the atmosphere friendly, but certainly not private.

That lack of privacy is extended to your ears. While you’re enjoying the hot tub in the evening you’ll hear the calls (thankfully, rather lackluster) for the six-times-a-night bingo; while, at breakfast, your French toast comes with unlimited syrup and all the Fox News you can stomach: the station is broadcast on two TVs, located so that they are virtually unavoidable. 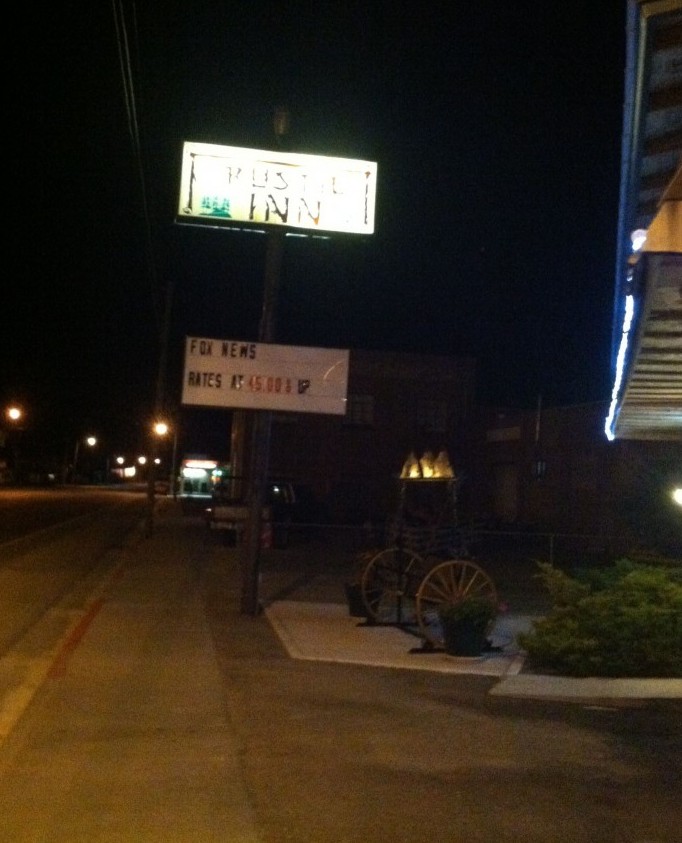 The Copper Queen isn’t the only establishment in Ely offering a healthy dose of Rupert Murdoch. Walking one night into “downtown” Ely (much of which is boarded up, though the numerous murals commissioned by the Ely Renaissance Society are a treat), I noticed on the marquee of the Rustic Inn that they offered “Fox News” — this in the place where one is used to seeing “HBO” or “Free WiFi.”

If the pollsters are correct, Nevada will go blue today, but I didn’t see any marquees in Ely offering “MSNBC,” but that’s probably because the demographic I encountered in the hotels – white and aging – fits the stereotype of the Fox News fan.

This type of demographical branding is at the heart of Jonathan Horowitz’s Your Land/My Land: Election ’12 exhibition now up at the Utah Museum of Contemporary Art. In the museum’s new media gallery, two flat screen televisions are suspended from the ceiling facing in opposite directions. On one, facing the half of the room carpeted in red, Fox News plays continuously. On the other, MSNBC plays for the blue-carpeted side. The only other adornments are two portraits: the one of Barack Obama, the incumbent, is hung on the wall, while Mitt Romney’s is on the floor. This would change according to the election results tonight.

Sociologists have shown us that we do tend to herd together, and adapt ourselves to the herd we are in; and the UMOCA audience is likely as politically homogenous (though on the opposite side of the divide) as the Ely, Nevada crowd. It is telling that the exhibit’s MSNBC screen faces the Museum’s hallway, while you’ll only actually see Fox News if you enter the room and walk to the other side. Outside the room a computer screen, split again between blue and red, allows patrons to leave comments. And as if to prove the assumption about the Museum’s average patron, the comments for Obama are far more numerous and assertive.

At the core of Horowitz’s installation is the idea that rather than closing ourselves off into our comfort zones, preselecting the news and opinions we ingest, we should expose ourselves to both sides, engage in a dialogue. The political dialogue on these channels isn’t known for its subtleties, however, and to an extent Horowitz’s installation falls victim to the very divide it hopes to overcome: it presumes that either one news broadcast or the other is the voice of any single visitor. That being said, it may be be a cool place to watch the results of the election come in tonight. The exhibit will be open from 7 PM to a time to be determined. Pizza and soda will be served.