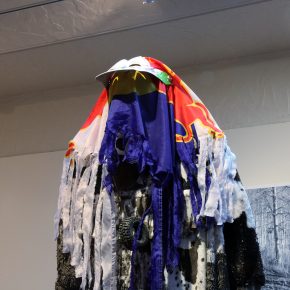 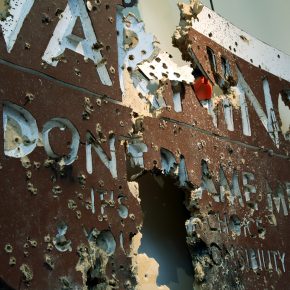 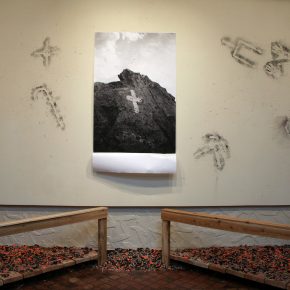 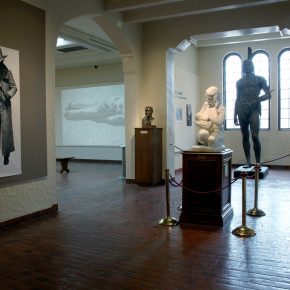 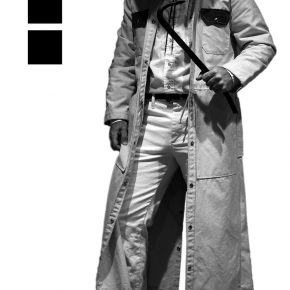 The six prominent Utah artists now on exhibit in the Springville Museum of Art’s (SMOFA) Here, There, and Everywhere have each developed a personal style that is immediately recognizable as well as adept at evoking a sense of place. The exhibit is an examination of how ”spaces” become ”places,“ the interaction between the concrete and the abstract, and the works on display here, which feel at home in Springville, use the beautiful and the iconic to give viewers a sense of a physical place. By contrast, Levi Jackson’s parallel exhibit, Middle | Nowhere, examines place from a more conceptual viewpoint, a curatorial decision that indicates an exciting departure for the normally conservative museum. Through sculpture, video, photographs and installation, Jackson’s exhibit focuses on the presence and quality of being that is “place” by addressing various contradictions and misconceptions that define the American West—ways of seeing versus ways of actual being. His idea of “place” isn’t as much about the space one inhabits as it is the ideas that inform it.

In Here, There, and Everywhere, each artist is represented by a number of works illustrating their unique take on place. Many of these paintings are defined by concrete presence – the rocks in Brittany Scott’s majestic mountain, or the grass from Jeff Pugh’s rustic prairie; a stream cutting through rough terrain in deep winter snow evokes a sense of place in Joshua Clare’s work, as does the glowing lights of Las Vegas in Karen Horne’s nocturnes. Justin Wheatley’s architectural paintings may become detached from specific settings, but they remain evocative for their concrete rendering of physical landmarks. Mark England’s paintings are surreal scenes, bird’s-eye views of fantastical landscapes in which much is exaggerated and much is elided, which only goes to emphasize England’s reliance on the physical landmarks we associate with place, helping us to identify portions of his paintings as we would when peering at a map.

SMOFA presents Jackson’s exhibition as “the other side of place—the forgotten spaces and disregarded landscapes of the American West,” thus allowing the audience to journey through tough art, with equally nebulous philosophies to come to their own conclusions.  Remarks Jackson in his personal statement for his show: “My intention is not to simply comment on a Western reality as not inspired or beautiful, because it is, but it is more complex – and gritty.  While the West certainly is mountain springs, ox bows and wild flowers; it is also dry lakebeds, horse flies and thistles.  Furthermore it is a cocktail of militaries, mysticism and the momentary.”

For those who do not know it, the West may be a myth (and it may still be for those who do).  It is “Eat at Joe’s” diner, the Grand Canyon, the Spiral Jetty.  Many who do not know it don’t even know where it is—Utah is perpetually misunderstood as somewhere in the Midwest: “Iowa, Ohio, Utah?” Envisioning Death Valley, for one who has lived in New York City for a lifetime and never ventured to Baker, is like trying to grasp Space Mountain having never been to Anaheim. It is a misconception, a falsehood, and these kinds of preconceived ideas of what is assumed and not experienced speak of precarious “contemporary mentalities,” of ever-changing realities.

Even those who have driven through these places, or even visited them for extended trips, may not fully understand the West, with its myriad elements, shapes and sizes, forms and functions. The West is not only landmarks but concepts. Jackson’s “Jesus Was a Cowboy” is unsettling in its statement about misconceptions and what is misunderstood and at war with truth.  A traditional cowboy with a full-length “duster” coat and cowboy hat, classically tilted down, hiding his face, holds a crowbar in his right hand, while on his white hat is the crossed shotgun “sight,” transparent and gray, aimed from an unseen force while the cowboy holds his bar at an unknown foe.  Who is right or who is wrong?  Of course, both and neither. Contemporary mentalities destroy the authenticity of presence that defines the condition of place… and the moment-by-moment shifting and changing of the West itself.

In another photograph we see a large painted white cross on a rocky mountain peak. Printed in black and white and cursorily attached to the wall, with a band of white, unprinted paper curling at the bottom like a loose scroll, there is a sense of foreboding ambiguity. For those who have seen the “Y,” and the “U” and so many other marked mountain slopes along the Wasatch Front and throughout the western United States, this may be no cause for attention whatsoever.  But to a foreigner, this might look cultish, from “a show I saw on TV,” or even an association with the KKK, without any regard for thoughtful understanding.  The photograph is surrounded by a number of cryptic images on the wall, created as negative silhouettes, like the handprints in cave paintings. They reference a number of things, including NATO military codes, Christian theology, and Native American traditions. A platform beneath this wall, full of broken pottery shards, suggests both our institutionalized experience of sites like those suggested by the wall paintings, and the destruction we cause to these sites.

In a panoramic photograph on one wall, the title “I Don’t Plan on Shootin’ You Guys,” seems to be the remark of a frightened young stag as a hunter pursues it on an all-terrain vehicle.  The image is ironic and ugly, a prosaic reminder of the reality that this kind of sport is a practice in the American West.  Whether there may or may not be more hunting on the African plains, or Nevada, who can say?  Yet besides poaching, hunting is condoned in Africa, while the “West” is a “backwater place of deserts and salt flats and scorpions and cowboys and cults and hunters.”

Additional works in the show deconstruct the mythic West. “Hogwash,” a sculpture of wood and mud draped in a helmet, goggle and flag, reinforce this uglier side. The tattered flag – an advertisement for the Red Bull energy drink – forms a protective mask around the helmet and goggle and reminds the viewer of the loud, emissions- spewing vehicles that have replaced the mythical rider on horseback. “The Dotted Line,” a shot-up sign which at one time apparently read “Warning: Don’t Blame Me,” is a similar reminder of the derelict edifices that lie just behind our views of the pristine outdoors.  In the video piece “Drifter” a cowboy dressed in white is dragged along salt flats by a Ford 1500, a modern-day take on the Hollywood trope of a cowboy being dragged by his horse; but these images are juxtaposed with another figure in white, prone on the same dry ground, who turns out to be a woman, charging the cinematic trope with an undercurrent of sexism, a tribute to the perpetual changing realities of place and conceptions of it.

All of these ideas explored in Jackson’s Middle | Nowhere are as much a part of the West as the physical elements found in the majestic mountains and Victorian architecture we see in Here, There, and Everywhere.  With ever-changing conditions that constitute our world today, having surer awareness of place and space benefits the current threat of heterology, affecting the loss of cultural, social and personal identity.  Understanding place is to maintain cultural norms, values, and conditions, while space is forever within reach, engendering attainable aspirations while forging forward.