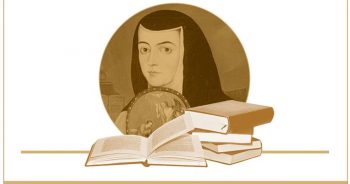 An attentive group of writers and mentors gathers around two long tables at the City Library downtown on a Thursday evening. This workshop is a collaboration between the Artes de Mexico en Utah (Mexican Art of Utah) and Salt Lake Community College’s Community Writing Center. Participants receive valuable instruction and constructive feedback in preparation for their submissions to the 6th Annual Sor Juana Prize for poetry and stories in Spanish.The workshop begins with a discussion of how writing in Spanish is different from writing in English. Susan Vogel, co-founder and board member of Artes de Mexico en Utah adds her thoughts: “When you read a work in Spanish, particularly when it is read aloud, it’s almost like music.”

Artes de Mexico promotes and encourages the artistic contributions of the Hispanic community in Utah. For the last six years the organization has provided a very special recognition for literary arts in Utah with the Sor Juana Prize for works written in Spanish. Griselda, a first-time participant in the contest, expresses some of the advantages as well as personal challenges of writing in Spanish. “When I write in Spanish,” she says, “I know that there are words that are more expressive than in English, but sometimes I just don’t know which words to use.”

One of the goals of the writing workshop and a primary focus of the Sor Juana Prize is to encourage writers in the community to discover and use those words to create outstanding poetry and prose in Spanish. A former participant and past winner of the Sor Juana prize, Fanny Guadalupe Blauer is also in attendance. She shares a moving and pertinent comment from a young man who participated in the contest the previous year. “I wrote my piece in Spanish about my mother,” she reports the man as saying, “even though I don’t usually speak Spanish outside of my home. Since she only speaks Spanish, the rhythm of that language was better for reflecting how I feel about her.”

Inspiration for this group of participants and aspiring writers include Spanish-language authors such as Gabriel Garcia Marquez, Pablo Neruda, and historical figure and writer Sor Juana Ines de la Cruz, the namesake of the Prize. These figures serve as examples of famous writers who share a common heritage with many of those who will be contributing to the contest this year. Those who attended the workshop received guidance and helpful critique of their work, and also had a chance to participate in writing exercises and activities during the evening.

The ability to express ideas and create literary pieces in Spanish is important both for those who speak Spanish as their native language, and for those of Hispanic descent even if they are very comfortable communicating in English. Operations Director for Artes de Mexico en Utah Jorge Rodriguez encourages residents of Utah to participate in the Sor Juana Prize in order to help connect with their roots. “I personally identify as Chicano,” he says. “I sometimes feel like I don’t fit in as a Utahn, but I also don’t quite fit in as Mexican, either. It’s important to have access to resources and opportunities that can help me identify and learn about my Hispanic heritage as a member of the community in Utah. It can help promote a sense of identity for those who might not have a strong feeling for where they come from.”

The Sor Juana Prize is open to both students and adult residents of Utah, and includes multiple categories. All submissions are in Spanish, but Spanish does not have to be the writer’s native language. The Sor Juana Prize is presented in partnership with and supported by several additional organizations and businesses within the community.

For more details on the contest and the requirements for submission of poetry and short prose, visit the Artes de Mexico en Utah website or Facebook page.

The deadline for all submissions is Saturday June 30th.