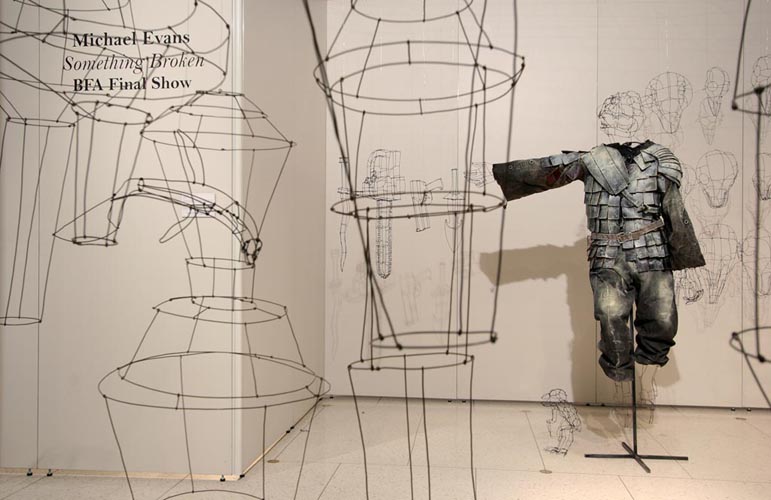 Something Broken, an installation by Michael Evans

On a recent visit to the Brigham Young University campus, I was charmed by one of the exhibits in the Harris Fine Arts Center. In the large open space of the Center’s atrium, students from the University’s fine arts program regularly exhibit their work. Being as they are exhibitions from students, whether pursuing a Bachelor’s or Masters degree, the exhibits are of varying quality, frequently displaying reinterpretations of the professors the students have obviously been studying under but at times showing great skill and imagination and a great deal of promise. 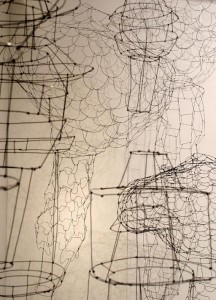 Michael Evans’ BFA Final Show, Something Broken, rather than reminding me of the work of any of the professors currently teaching at the University, reminded me of the work of an artist I came across in San Francisco last year. In the February 2007 edition of 15 Bytes, I reviewed the book The Sculptures of Ruth Asawa: Countours in the Air, which was published in conjunction with a retrospective exhibition of the artist’s work at the de Young Museum. These works, delicately floating in air or casting elegant shadows on walls, exploring the differences and similarities between negative and positive forms, were stunning to behold. Evans does something similar in this exhibit, bending and linking wires to create forms of negative and positive space floating in air. Evans’ tone and objective, however, are something quite different from Asawa’s. 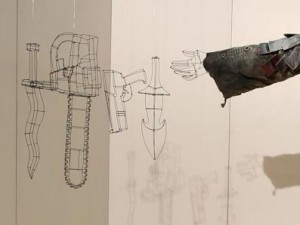 detail of Something Broken, by Michael Evans

The only “solid” object in the space is a form created by the cloth undertunic and shelled exterior of an Asian warrior’s armor resting on a wired structure. Wire forming a transparent canine head emerges from the top of the form. Immediately behind this form, a series of similar canine heads act, presumably, as changeable avatars for players of a video game, for video games and the virtual world are the subject of Evans’ exhibition. He says that he deals “with my feelings about video games, media addiction and digital identity.” To the left of the figure, similarly sculpted in wire and floating in the space, is a series of weapons: short sword, chain saw, pistol, dagger. From repeated attempts to bond with my nephews, I recognize these as the various weapons of choice a player might use in a firstpersonshooter game to kill his enemies — either being equipped with them at the beginning or, more likely, having found them, similarly transparent and floating, throughout the space of the game. The other half of the exhibition’s space is occupied by less obvious objects, what I presume are meant to call to mind various “objects” found in a video game: treasure, health points, transport, etc.

The lights of the exhibit were situated so that I could see the cast shadows of these positive/negative forms faintly mingling on one of the walls. A similar strategy was used by the curators of Asawa’s exhibit, to great effect. In Evans’ exhibit, I wanted to see this option more obviously exploited. The idea of forms, negative or positive, virtual or real, might have been evoked by these reflections. The two-dimensional reflections of the three dimensional objects might have been identified as corresponding to the “something broken” in the exhibition’s title. A reviewer might have been tempted to wax philosophical about the resemblances to Plato’s cave (what parent hasn’t wanted to push their children out of the flickering world of the basement/cave to go play in the ideal, sun-filled world outside). The idea, in other words, seems approached but not exploited.

While I was taking notes on the show, a group of tweens, of both genders, came into the space. They immediately went to the weaponry and one young girl exclaimed, “Cool!” Their parents had to pull them away from the exhibit. How often does that happen? I doubt the children would have followed the artist to any critique of the video games they so obviously enjoyed playing, but there was no denying the exhibition’s visual appeal. 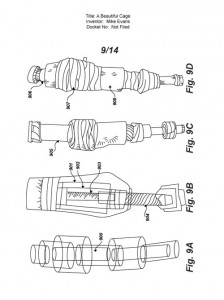 On the outside of the “virtual” space of this exhibit, Evans is also exhibiting a series of drawings. These are small designs for imaginary objects, the use of which is not clear. They resemble, in form and line, the wire structures of the virtual exhibit. The artist indicates that he has created these drawings as a boycott of the patent system, which he believes blocks creativity and medical progress. Each drawing’s title includes “Docket no: not filed.” The artist offers these designs to the public free of charge, without the hindrance of a patent. What would stop you from taking the drawing and registering your own patent, I wondered? For that matter, how does the artist feel about copyright? Does it similarly constrain creativity? Does the artist offer up these drawings free of copyright controls? Might I be free to copy them and sell them as my own artwork?

My point is not to take to task this young artist, on the cusp of a promising career in which I’m sure he will refine his ideas. In fact, I don’t believe it is the practice of this publication, generally, to review students; but despite some of the artist’s drawbacks, I was taken by the exhibit. It did have an immediate charm. Like the tweens who barged in on my note-taking, I thought, “Cool.” Art must give the viewer something lasting to consider and must stand up to careful scrutiny, but if it can’t also have this, an initial visual experience that compels one to stop, for all its philosophical content it is a limp work. I respect the artist’s earnestness in social matters, and admire his visual creativity and hope that the coming years will see the realization of the promise evidenced in this exhibition.