Shm00fi3zZ Virtual Birthing: A Queer Orwellian Spacescape in the Age of COVID

It’s both difficult and amusing to consider where to begin after witnessing the Shm00fie3zz Birthing.

The basic, “what does it mean?” expresses a genuine desire, but feels almost disingenuous when examining the series, captivatingly conceived of and performed by Salt Lake City artists Natalie Allsup-Edwards, Molly Mostert, and Emmett Wilson. The Shm00fi3zZ Birthing, hosted on possibly the most garishly dystopian of all platforms, Instagram Live, mounts the ritual births of the Shm00fi3zZ, adorable beanie baby-like space aliens, who are immediately auctioned off for adoption by the Inter-Dimensional & Galactic Adoption Foundation, Inc. (IDGAF). The piece is a continuation of the long-term performance art series typically conducted live but modified for COVID-19 safety.  Both delightful and sinister, watching the Shm00fi3zZ live on Instagram is akin to watching the Teletubbies read Orwell. 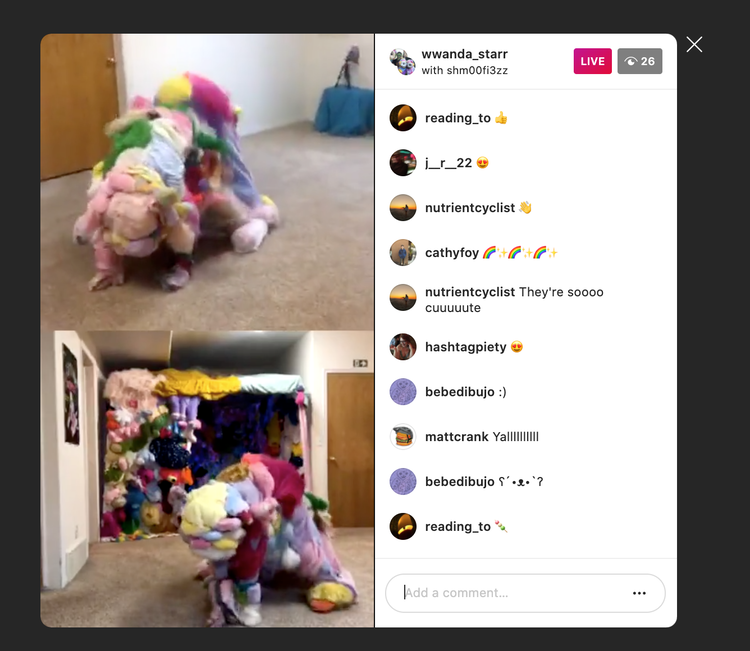 Adult Shm00fi3zZ are near impossible to ignore. The large harlequin space cyclopses, embodied by Mostert and Wilson, dance with exaggerated and guileless movement, emitting high pitched squeaks and buzzes, presumably with unseen kazoos. While the Shm00fi3zZ, like walking Lisa Frank notebooks, are so aggressively cute that they express some sort of uncanny horror, Wwanda Star, the Adoption Agent for the mysterious and/or nefarious IDGAF, judiciously played by Allsup-Edwards, is just as engrossing. With stilted optimism, Allsup-Edwards grimaces from behind Martian green face paint while narrating the scientific observations about the Shm00fi3zZ, whose offspring she collects, tags, and auctions off.

The queer performance piece is unsurprisingly resistant to moralization. Indeed, in the spirit of both strict postmodernism and absurdist millennial humor, applying meaning is probably what audiences should avoid. However, for the purposes of entertaining ideas, it is worth postulating that the Shm00fi3zZ could be 1) a dark metaphor for animal rights, 2) a biting critique of the mistreatment of immigrant families by the United States government, 3) a reminder of the inevitable commodification of the body in a capitalist society, 4) a commentary on the pitfalls and horrors of the art making process.

Over the trills and toots of the Shm00fi3zZ, Wwanda made the eerie assertions that “when they’re not birthing, they’re working” and “it is so difficult to give away the things you create.” Over the course of the performance, her growing obsession with “productivity” belied one of the central themes of the Shm00fi3zZ piece: greed. Ultimately, while Wwanda is willing to go to great lengths to explain away the Shm00fi3zZ objectification – they are “ill equipped to care for babies” – audiences must choose where they stand. Do we believe Wwanda is doing what’s right for the adorable baby Shm00fi3zZ? Or do we support the adult Shm00fi3zZ in their struggle to keep their innumerable offspring? Much like said babies and the swarmy, grotesque bodies of the adults, questions are plentiful, comical, and disturbing. 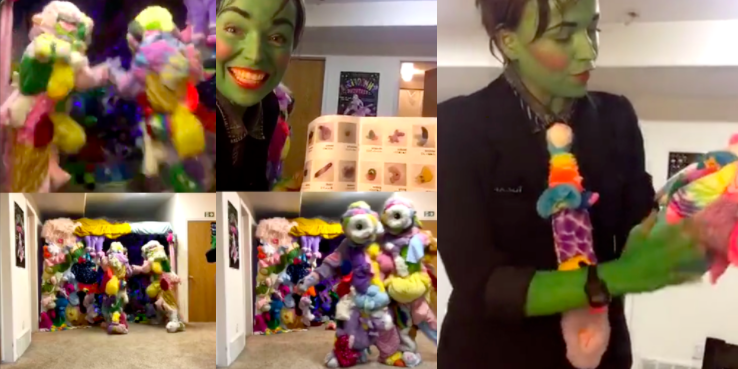 The Shm00fi3zZ Birthing delivered (if you’ll pardon the pun) surprising twists and turns, plus many humorous Easter eggs, to which Allsup-Edwards dutifully pointed the viewers. Past Shm00fi3zz shows have embraced a need to stay in-character that rivals that of the Muppets. As a result, audiences are immediately drawn into the narrative. Not to be inhibited by social distance, the trio encouraged audiences to interact with the Shm00fi3zZ: viewers could dance at home (to promote the birthing process!), ask questions of Wwanda via the chat feature, and even order the baby Shm00fi3zz via eBay. As bizarre and fascinating as the Shm00fi3zZ Virtual Birthing may be, the trio of artists produced an outrageously complete, provocative, and well-constructed show that let audiences’ minds and bodies go wild.

Max Barnewitz is a writer, comics enthusiast, and outdoor nerd based in Salt Lake City. Max graduated with an M.A. in Comparative Literary and Cultural Studies from the University of Utah in 2016. Their thesis, “The Animal As Queer Act in Comics: Queer Iterations in On Loving Women and Nimona” underscores the potential for comics to portray LGBTQ+ identities. They also serve on the organizing committees for Salt Lake’s Grid Zine Fest and for Queer Spectra Arts Festival.