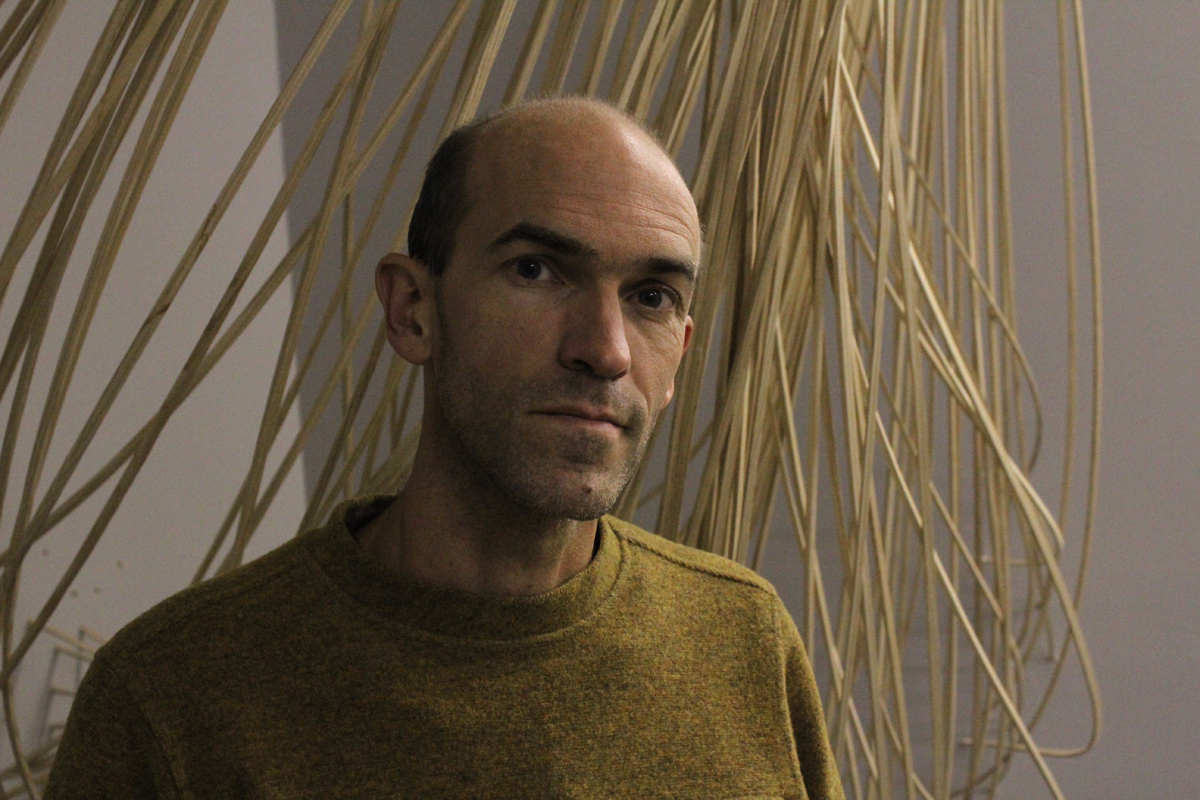 Shawn Porter knows materials and how to use them, but in art, he says, the idea comes first.

Porter has always worked with his hands. He says he doesn’t really understand something unless he can see the mechanics of it and his mind can communicate with his hands. School, obviously, held little interest for him. He grew up in Lehi, Utah, where at eighteen he got a job in a cabinet shop working on high-end architectural fixtures. His desire to leave the state and see the world caught up with him one day while he was sitting in an unemployment line. He joined the Navy, where he spent three years on a salvage ship, picking up wrecked aircraft, towing ships and submarines, and debeaching ships run aground. His hands learned a whole new set of skills and became familiar with new material; and he enjoyed the life experience, seeing cultures and places in the Pacific few get to see: “The little cartoon of the two guys sitting on a sandbar with the palm tree,” he says, “The sandbar, it really exists, I’ve seen it.”

When he came back to Utah — he missed the mountains, the desert and the Great Salt Lake — he returned to carpentry, but in its rougher form: building homes from the foundation up, he added electrical and plumbing skills to his set. He returned to fine carpentry when he got a job building furniture with Jeff Kobay. 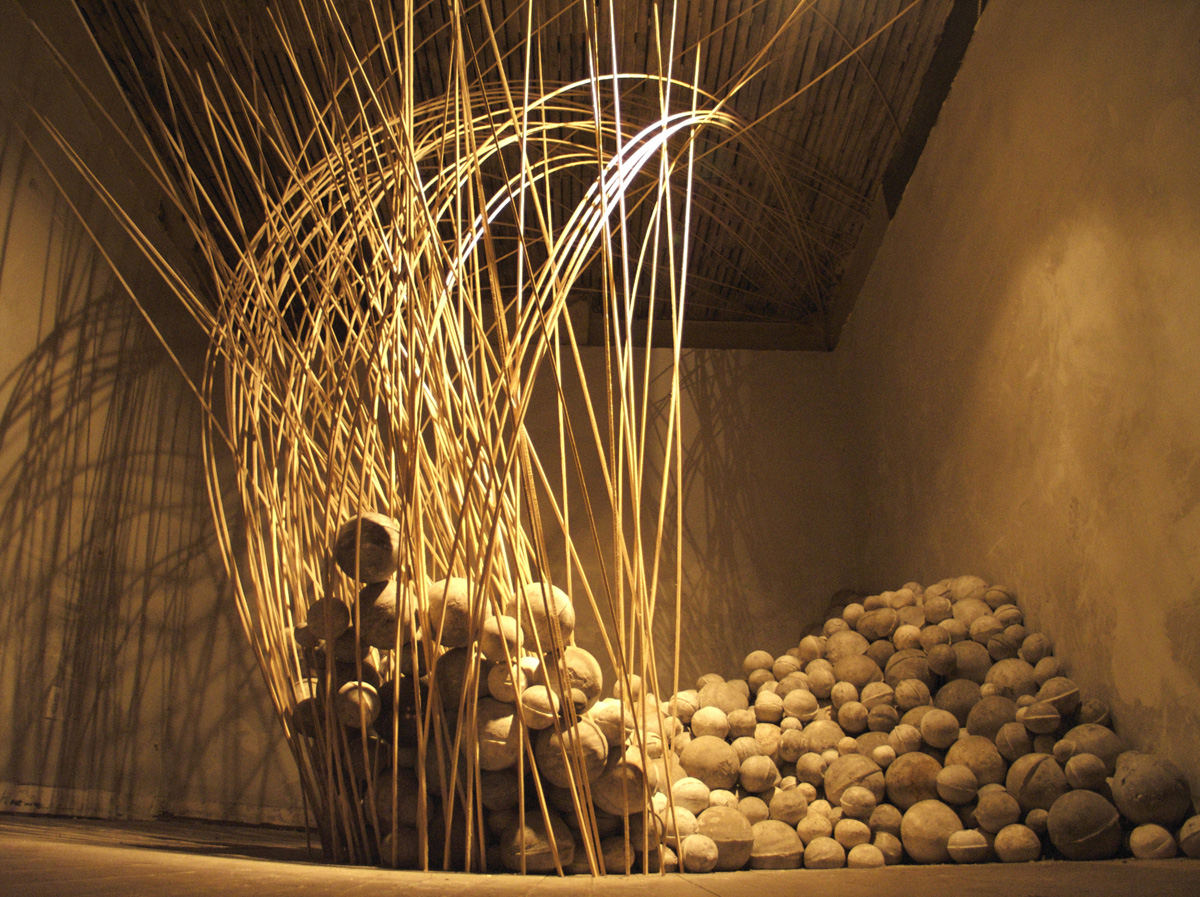 The artistic side of working with Kobay peaked Porter’s interest in art and when he saw a job at the University of Utah’s art department he jumped at the opportunity. “I wanted to expose myself to [art] more and really immerse myself in it, see what it’s like from the inside.”

Porter says that “growing up I was always the dumb kind, and that’s always been my screwdriver in the chest, so to speak.” So even though he’s been at the University’s art department for eight years, and has participated in significant exhibitions and received important commissions for his work he still feels like an outsider. “I’ve always felt llike I’ve been on the fringe of the art world . . . maybe because I don’t have the art education in the traditional sense.”

The “dumb kid” label is something self-imposed, but Porter does exist in a sort of borderland at the department. He may give a lecture now and then — “a three hour lecture on studio safety where every once in a while I have to interrupt the increasing drone of my voice by turning on a machine” — but he is not part of the teaching staff. His job is to keep everything in the building — kilns, presses, tools — operating, and making sure staff and students know how to use them properly. Students frequently come to talk to him about their work and he’s happy to discuss technical questions but he tries not to intrude on the territory of the professors. He enjoys the interaction and says he wouldn’t mind teaching, but doesn’t think he’d enjoy jumping through the hoops necessary to get an MFA. Besides, he’s already frustrated that he has too little time to get out all the ideas that are going on inside his head. “I get antsy when I can’t execute my work.”

That work has been gaining attention in recent years. Porter first came into public view in the spring of 2007 when he participated in the original 337 Project. After lots were drawn and he had chosen a top-floor room to work on, he began struggling with the idea of his piece. An initial concept involved building a destructive tool as part of a performance that would slowly destory the room. Another was based on a video projection dealing with the lives of those who had used the building. Ultimately Porter settled on something simpler and more elegant. “I was tearing back layer upon layer of the building and I thought, why not make something on impermanence and how temporary everything is . . . The building was going to be torn down. I was interested in representing something that is failing. I wanted to embrace failure, that nothing is forever.”

Which is how what has become referred to as his “stick and balls” works came to be. In these installations a series of long, thin sticks are bound together to form containers that hold roughly hewn plaster balls of various sizes. Because he couldn’t find any manufactured products that would serve his needs Porter constructed the material himself, stripping down planks of ash into one inch strips and experimenting with various mixes of plaster in the plastic molds he created for his balls.

In 2008 a new iteration of the work was revealed at the Salt Lake Art Center’s Present Tense show: two bound onion-shaped structures pulled against each other to form a fascinating structured that managed to appropriately fill the space of the Center’s expansive main gallery (above). As the three month exhibition continued, the tension in the pieces slackened, allowing balls to roll free onto the gallery floor. Another iteration was installed at GARFO in 2009, and Porter has spent the past week installing the newest version at Nox Contemporary.

At Nox Porter has had to engage with an alcove space in the gallery, the center of which is dominated by a large, steel pipe. The ash sticks emerge out of a gallery wall (thanks, Porter says, to the generous permission of gallery director John Sproul), intertwining and rising up to the ceiling before cascading down into the center of the gallery. The elegance of the ash sculpture is contrasted by a makeshift structure of beams attached to the pole. This structure is a practical solution to a real problem — it holds the sculpture, which might look light and airy but has about 400 pounds in materials as well as considerable pressure from built-in tension — but it is also part of the piece’s idea. An elegant structure doomed to fail is propped up by a bulky mess that can only serve as a temporary hedge. 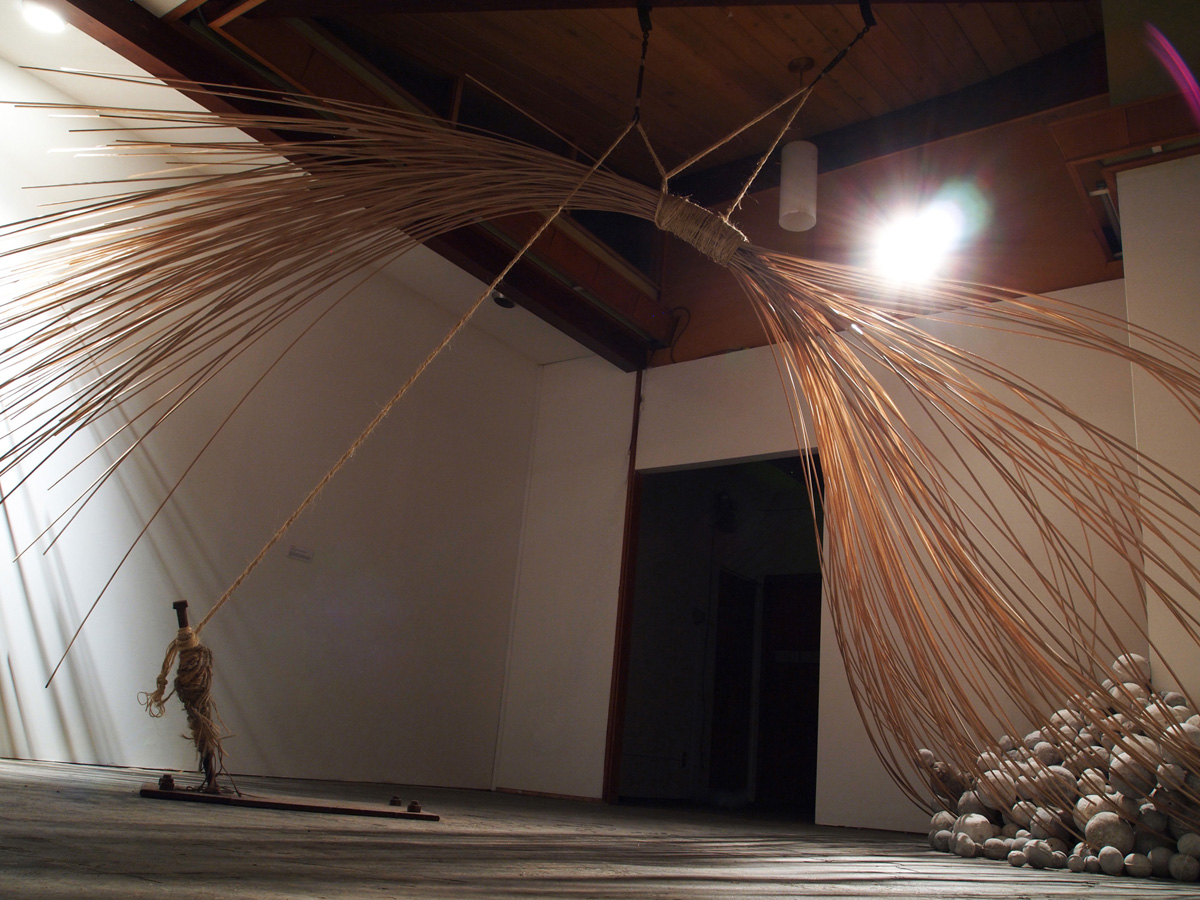 As in its other iterations this work is metaphorically rich and Porter is wise enough not to straightjacket the piece by spelling out any particular intepretation; but it doesn’t take an observant viewer long to construct one of their own: as with Porter’s piece, an economic structure like ours, built on market speculation, is doomed to failure and any makeshift repairs that attempt to prop it up will themselves succumb to the system’s weaknesses. As topical as one can make these works, however, their strength is in their poetic beauty and their thematic breadth that will continue to speak to the human condition even when (or if) we extricate ourselves from the current economic malaise.

Systems and the human condition have been themes in Porter’s other work. For the Pickle Company’s Exposed exhibit in 2007 Porter created a suspended terrain that mapped out the series of explosions in a nuclear testing area (below). Each explosion became a hole that was lit from beneath in a work whose haunted beauty both concealed and revealed its tragic referrant.

The joy of the mechanical challenge is likely why Porter is as comfortable and successful in his public works as in his gallery pieces. He’s created two “Flying Objects” for Salt Lake City’s ongoing public art program,|6-7| and the pair of pointe shoes he created for Ballet West’s fundraiser last year is now being used by the organization to advertise this year’s program.|8| These public art pieces give Porter a different sort of challenge. Public art, which he thinks is critical, needs to touch communities. It can’t be heady or scary. So for these pieces he has had to shift registers (entropy is not likely to be embraced by UDOT in the TRAX station piece Porter is currently working on), and reveal his more playful side. 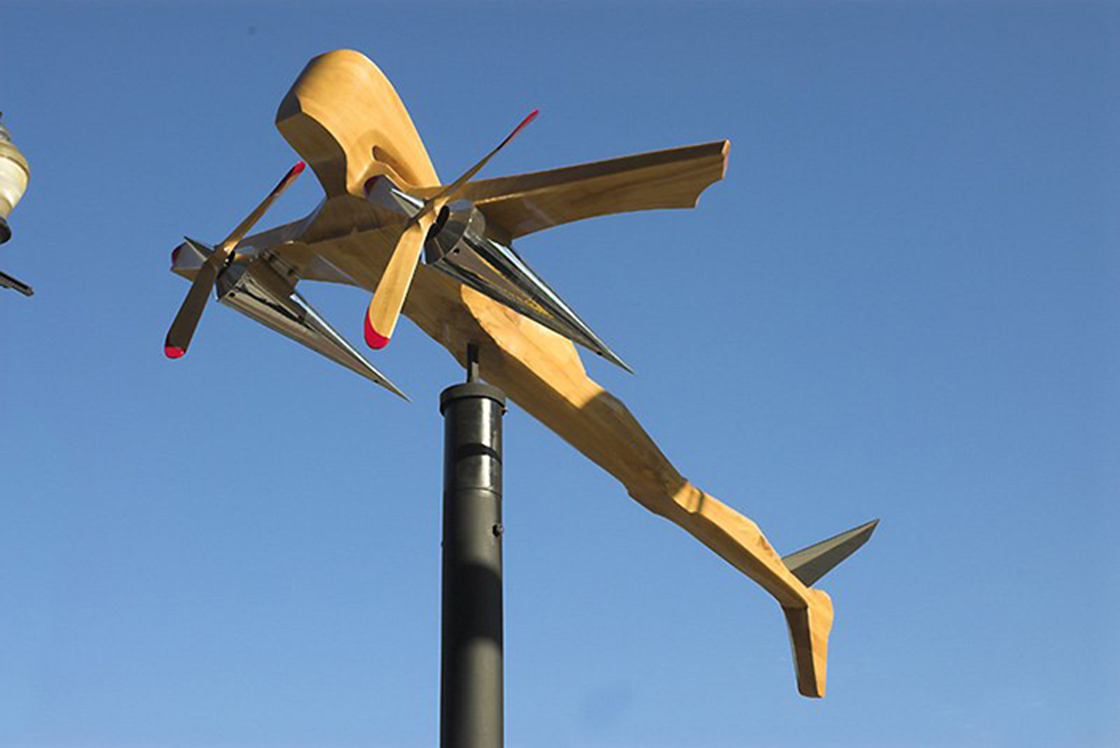 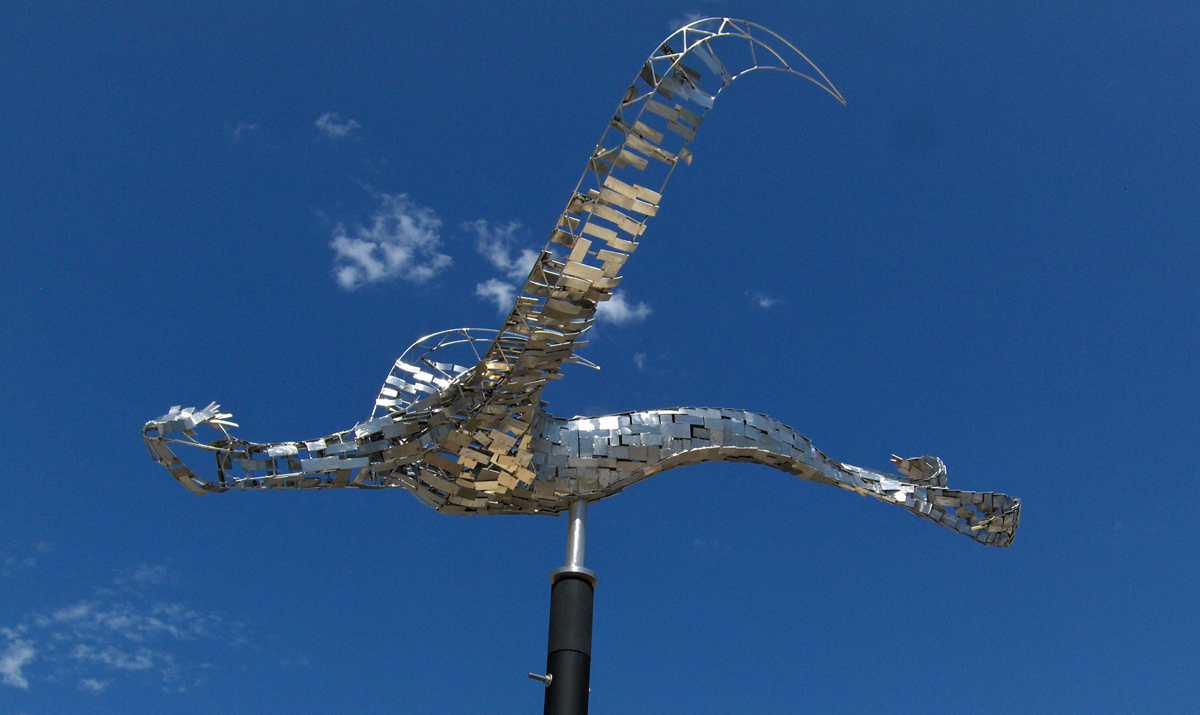 Not all educations come with a diploma, a fact that Porter recognizes when he jokes that his education plan has been to get a job: “Whether it’s some technical aspect or understanding a dialogue or discourse . . . when you’re in the middle of it you learn it.” However Porter might see himself, he is a long way from being the “dumb kid.” His art works have become some of the most mechanically developed in the area, and some of the most metaphorically rich. As Porter points out, ideas are important, but an idea that cannot be executed is of little worth, and a hands-on knowledge of materials and mechanics can bear as much artistic fruit as years spent studying history or theory. 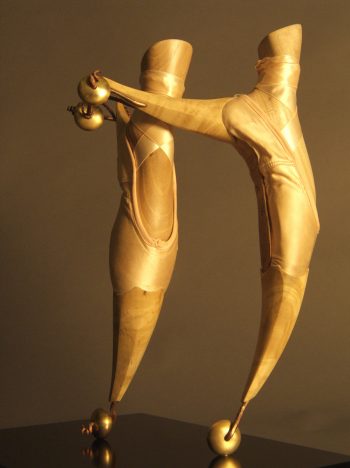 To learn more about the artist visit his website www.shawnporter.net, where you can view a video of the setup of Impermanence of Containment (2008). His current installation will be on view at Nox Contemporary, December 3 through February 3, 2011.