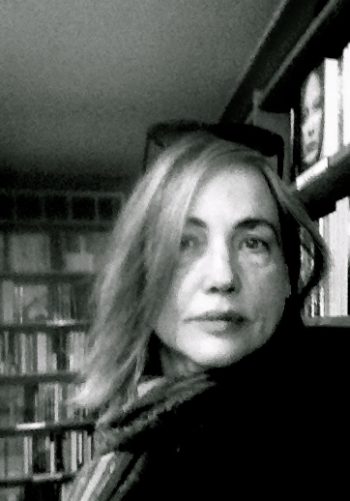 This is READ LOCAL First: Utah’s most comprehensive collection of accomplished writers who practice fiction, poetry, literary nonfiction, and memoir. This month we bring you Rebecca Pyle, a longstanding reviewer of visual arts for 15 Bytes.

Pyle is a writer, an oil painter, and a rock-gardener. Her works appear in numerous art and literary journals in the United States and elsewhere.

Shakespeare Wrote in the Time of Plague is a previously unpublished piece from our days of quarantine during this pandemic of 2020.

Everyone’s telling writers – during your health-quarantine, your isolation – Remember: Shakespeare wrote in the time of plague.

Shakespeare: fearless man of drama and luck. Stood up to one and all. Good dramatic-doom collector; good real-death dodger. Fate’s lodger; the super-hero of writers. (Though some say dodging death then was as simple as being one of the ones sprinkling wine in your water; or avoiding the poor or the cities or the unlucky; or wearing complex sweet smells in a velvet bag hanging from a cord around your neck.)

You could swear now, having heard about his magnificent skills in the time of plague so often, he’s with you now in your house where you hide from the coronavirus.

The plague of his time traveled from infected rats to their fleas, then to people. Church leaders intensified the plague; many of them hated cats, who they likened to witches; they called cats the sly assistants to witches, called them evil witches’ familiars.

You’re now—have you had too much wine in your water? — seeing that triumphant Shakespeare who was both genius and outlived the plague — surely a writer’s super-hero — everywhere in your house, like your new pet cat. An action figure: just five inches tall. You’re going to document this; everyone otherwise will think you sprinkled more than a little wine in your water. 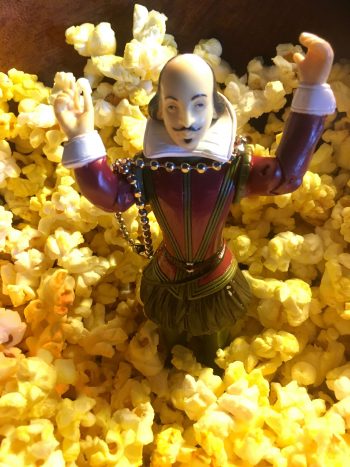 Popcorn he’s found. He jumps now in the bowl.

Our Indians invented that, you tell him, but he’s already climbing a chandelier.

Not Miranda? Do I look dramatic here?  he says.

You nod. You’re looking at him almost eye-to-eye.

You must make him feel very small. He quickly tumbles out of chandelier, grabbing a bar of soap big as a traveling trunk for him, carries it double-armed like a large pillow to a table where there is a very small owl, a Christmas ornament made of wool, sitting beneath an electric lamp. The owl is almost as tall as he.

I can be your therapist, the small stuffed owl says cheerfully. Tell me your problems? 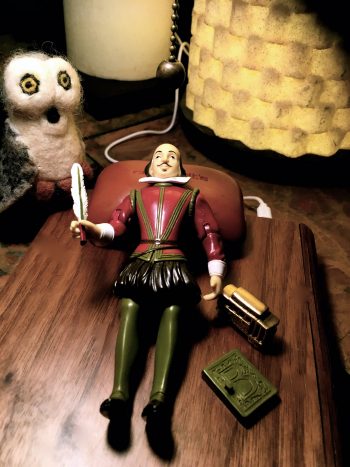 Already solved, Shakespeare says. Except this pillow. Why is this bar of soap I’m using here for a pillow so hard and so perfectly rectangularly shaped? Soap –should be soft.

The owl, who like you was not made in a factory, shoots you a look.

Factories, you say, to little Shakespeare. Factories changed the world.

And me. Did a factory make that?  he says, pointing at the closed dishwasher. What’s in that?

Oh, that’s a dark wet cave like a moat we wash dishes in. Dishes all the same,  you say. It’s driving you mad that his expression never changes; he is like a little painting of Shakespeare moving all around with the constant same face, like Salvador Dali or Andy Warhol, or images of George Washington, no longer real-looking. 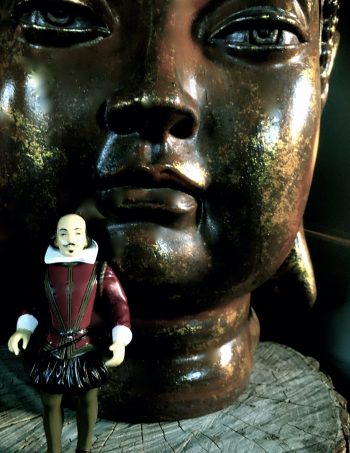 I want to say something to that Buddha over there, he says, but I don’t know what. I’m really not adequate. I’m a figurine, a fraud figurehead only. Shakespeare was really only someone else.  But you know. In fact, I think you found me at the gift shop at the university. I think I — I am just a copy. Does that mean I don’t have a mother?

He hops down. He climbs up a bookcase, even past a book or two with his name on its cover. (You’ve already told him — you love his work.) (My work? he shot back. Someone else wrote those. I was the businessman. The liar. The actor. The one in thrall to any number of crummy little confused groups of people and church throngs. I left him free to write, while he dreamed up his invisible unreachable crown. He was brave enough to be burrs under everyone’s saddle. But smart enough to hide; so he could keep writing more.)

Then he’s up in the kitchen windowsill, where the cat also likes to go. Finding yet another bar of soap, his fourth or fifth in an hour in your house; soap’s everywhere in this time of crown-virus plague. This one a translucent, from England, Pears soap. Used a hundred times, and oval, it almost appears hand-made. From England, you say.

Like amber, he says with delight. Like stained glass. Or tree sap. From England, you say? And why do you have so much soap everywhere?

Our plague coronavirus, you say. It’s secret, like your plague. You can’t see it. We fight it with soap to make it run away. It comes from bats. In China. Your plague came from rats.

Ha. Rats in every kingdom, he says. Sometimes they wear the false crowns. And you need your Pied Pipers of Hamelin. Bats – think – look like flying crowns. Those sharp repeated peaks in the wings. Hairy beady-eyed little mammal. I have something to confess. I must in my present form have come from where the bats come from. China. Look, I’ll show you. He shows me edge of his dark maroon plastic doublet: Made in China is imprinted. Don’t hate me, he says, because China loved me enough to make me – as a copy.

Soon he’s out the door ahead of your real cat, to feel real sun instead of lamps, and to stand beneath new daffodils in bloom, tall as palm trees above him: their blooms like bright yellow crowns on tall, floppy stems. 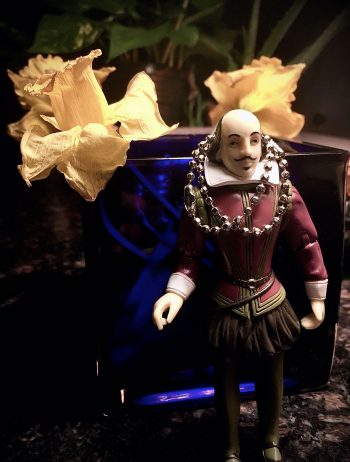 I’m king of the daffodils, he says.

Your large gray cat is staring at him. He’s now – Shakespeare’s familiar.

Take my picture, he says. Here tomorrow. Gone today. For a while. Do you have paper?

I have – copy paper, you say. You pick up the cat, who shouldn’t be outside. Shakespeare’s safe.

You go inside the house, have a glass of wine with no water in it, and when you go outside again, he, always safe, always genius, in time of plague – is gone. Was he really smaller than the daffodils? Did he talk to a stuffed owl? Did the stuffed owlet talk to him?

Yes – Shakespeare the magic action-figure of all time, who wrote his best in the time of plague.