The world premiere of a stage adaptation of Jane Austen’s Sense and Sensibility is the triumph of this year’s Utah Shakespeare Festival. Under the capable hands of director Joseph Hanreddy, and based on a commissioned text by J.R. Sullivan, this Sense and Sensibility is a delight to watch, as it retains the crisp language and taught emotions of the original, all the while playing up its latent comic possibilities.

Hanreddy, who has previously worked with Sullivan on an adaptation of Pride and Prejudice for the Oregon Shakespeare Festival, notes that Austen was a great lover of the theatre and staged her own productions intrafamilias. “Thus, we have her blessing and absolution,” he explains, “to make use of her masterpiece as if it were a long, very detailed collection of notes that she’d always meant to turn into a play.”

Any Austen family productions would have lacked the technical capabilities of the Festival’s Randall L. Jones Theatre, used here by set designer Hugh Landwehr and lighting designer Michael Chybowski in a subtle and stately manner, befitting the period. Minimal backdrops, painted in soothing watercolors, help to distinguish the settings in Sussex, Devonshire and London. And since actors are almost constantly on stage, bewigged footmen and aproned maids quietly shift furniture around them to create cottage, manor and ballroom, as the situation demands. The result is a grace and simplicity that seem wholly appropriate to the era, while creating for the viewer the necessary shifts in tone and locale. 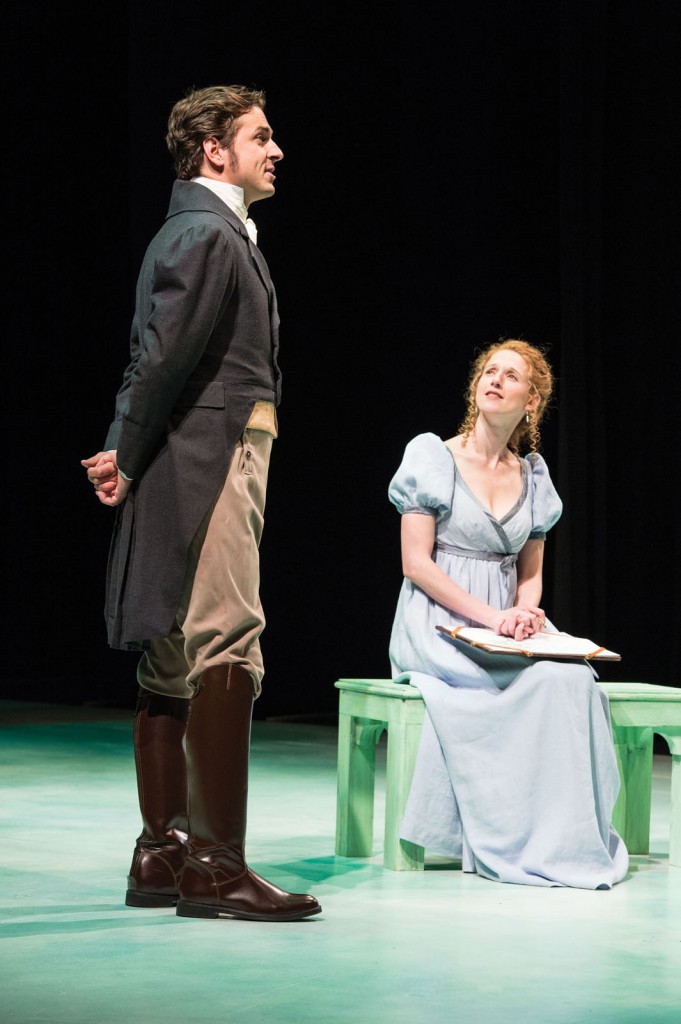 A setting without people is simply a backdrop, however, and the Festival’s cast does a magnificent job of peopling these spaces with entertaining characters. The pitch-perfect casting of this play makes one suppose the company’s actors were chosen first for their role in Sense and Sensibility, and secondly for any other productions. Case in point: Sam Ashdown is much more comfortable here in his role as John Willoughby than he is as Hal in Henry IV Part One; and Grant Goodman’s lanky form fits the ramrod posture of Austen’s Colonel Brandon better than his attempts at languid ease as Orsino in Shakespeare’s Twelfth Night. Cassandra Bissell is equally delightful in both her roles at the Festival. As Elinor Dashowood she deftly delivers her restrained emotions with subtle clues, anchoring the emotional currents of the play; but as Adriana in The Comedy of Errors she is all overheated spit and fury. Quinn Mattfeld is a superb Edward Ferrars, his subtle comic timing and self-effacing demeanor wholly unexpected after seeing his foppish Sir Andrew Aguecheek in Twelfth Night.

Purists may fester over any departures from Austen’s original. Yes, this is not the book. Neither is it Ang Lee’s film, though it is indebted to that as well. But if one can reconcile oneself to the fact that little Margaret is missing or that Charlotte Palmer (played here by Bri Sudia) is over-the-top funny, the Utah Shakespeare’s Festival is a wonderful theatrical production.