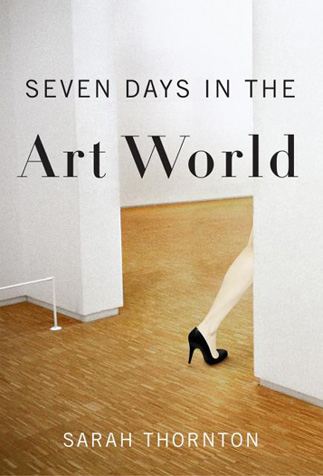 Seven Days in the Art World
by Ann Poore

Sarah Thornton’s Seven Days in the Art World is an insider’s view (and a reality check) for aspiring artists and a whirlwind tour of just what the title says for the rest of us. It’s a terrific read and deserving of a more extensive write-up.

Thornton is a journalist with degrees in both art history and sociology. She has contacts seemingly everywhere in the contemporary art scene and takes you along for a very well-researched ride.

Day One is devoted to The Auction at Christie’s, a world artists rarely enter, where tonight works by Twombly, Warhol and Ruscha are on the block. Thornton chats up the auctioneer, the bidders for the collectors, the collectors who are there in person, curators, journalists and even a stray artist and winner of the prestigious Turner Prize. He points out that “the auction is vulgar, in the same way that pornography is vulgar,” and astutely observes that some collectors “are effectively buying futures options on a work’s cultural significance.” We learn that there is a substantial difference in the price for work by living women artists versus that of men; the highest prices paid for works of art at auction and who paid them; the interesting differences between primary and secondary art sellers.

Day Two, The Crit, is spent at CalArts in a seminar where student artists present their work for collective critique. Here we encounter philosophy of art questions: the what-is-an-artist, art/not art queries and the search for multiple meanings in artwork by those whose work at this point has little monetary value. Thornton explores why the West Coast fosters the ability for artists to take risks: great schools, warm climate, relatively cheap rents and a “liberating distance from the dominant art market in New York.” She finds it significant that in L.A. artists see teaching as part of their practice rather than as a stigma on their careers.

Day Three involves a visit to the major contemporary arts fair in Switzerland where collectors plot their best routes to the gallery stands and discuss the then-relentless boom in the art market. On Day Four we visit the entries (and most of the entrants) for the Turner Prize at the Tate Museum in London. Day Five sees us back in New York in the offices of Artforum, where we examine the inner workings of the magazine and its website.

On Day Six we are in Tokyo, setting out to visit The Studio (or three) of Takashi Murakami, who perhaps surpasses Warhol in his breadth of interests and ambitions. Beyond Warhol’s peeling banana for The Velvet Underground’s first album, Murakami did hip-hop artist Kanye West’s third album cover, the singles covers and an animated music video – because Kanye was a fan of the artist’s 1997 “big-breast” sculpture.

The week climaxes at the Venice Biennale, the outsize exhibition of contemporary work that ends for the art world the week it opens to the public.

It’s an intelligent and insightful journey into the subcultures and dynamics of a once-heated art market, no longer hot but still simmering.