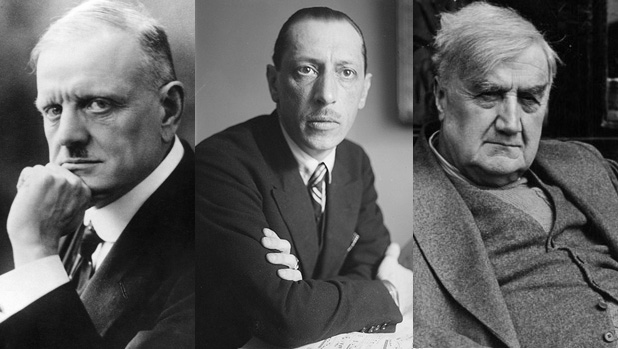 The title promoted for the most recent Salt Lake City Symphony concert was “Fire & Ice!”  The program: works by Jean Sibelius, Igor Stravinsky, and Ralph Vaughan Williams — a Finn, a Russian, and an Englishman. All the works were conducted by Robert Baldwin, an American. In the end, the fire was beholden to the luminous and transcendent ice.

The music of composer Jean Sibelius (1865-1957) is often associated with cold and cool orchestral textures and colors, although in this case the orchestra performed Finlandia, a symphonic poem that is romantic and starkly nationalistic — it was written for an 1899 covert protest against censorship from the Russian Empire.  It was premiered on July 2, 1900 in Helsinki. Indeed, most historians consider it to be one of his signature pieces, although it is not necessarily representative of his later work.

The music the Russian Igor Stravinsky (1882-1971) wrote for the ballet The Firebird is resplendent, with warm textures, but it is also in its own way nationalistic and romantic, based as it is on fragments of reconfigured Russian fairy tales. In this instance the orchestra performed the 1919 Suite, which is less than half the length of the music for the full ballet, with a less Wagnerian-size orchestra. The premiere of the original full-length score took place on June 25, 1910.

English composer Ralph Vaughan Williams’ Symphony No. 7 Sinfonia antartica more than solidified the ice portion of the concert’s programmatic equation. Its symphonic style is firmly romantic yet obviously more modern-sounding, and it too has nationalistic overtones, partially composed as it was for a film depiction of an intrepid British explorer’s encounter with nature at its most grand and inhospitable. But this symphony moves far beyond that, to become one of the best and most enveloping orchestral landscapes ever painted in any genre.

Finlandia, with its surges of loud and soft dynamics — sometimes considered to be on the verge of bombast — and exposed brass parts, can be difficult to finesse, but music director and conductor Robert Baldwin, the Salt Lake Symphony, and twenty-three side-by-side high-school musicians, came close to the mark. The brass were somewhat tame at the start, but the strings were warmly fulsome and the bass lines distinct. The second major theme — the Finlandia hymn — was a bit reticent when it first appeared, but colors were pellucid and the performance gained from not attempting to overplay this well-known melody. So overall, the performance was perhaps a little lacking in declamatory fire, but this allowed a more distinctive and even soothing interpretation to emerge.

Igor Stravinsky wrote the music for the ballet The Firebird in 1911. The 1919 Suite essentially has four sections or movements. In the Introduction Baldwin adopted a flowing tempo, with precise playing by the basses, and bassoons that were brusque and pliable. Ring Dances of the Princesses emerged with a plush yet fleet pace, but was a little unsettled and sleepy. The Infernal Dance of King Kashchey was crisp and bracing; the transitions to softer moments were more deftly handled. As for the Lullaby and Finale, the lyrical and harmonic lines had a sinuous focus, and there was a delicately piquant oboe, complemented by bassoon playing of poise and limpid color. The Finale was fiercely brazen. So a convincing Firebird, but nothing momentous.

Ralph Vaughan Williams (1872-1958) was one of the major English composers of the last century, and one of the the most prominent composers of the twentieth-century. His nine symphonies (Symphony No. 1 was premiered in 1910, No. 9 was first performed in 1958) have moved in and out of fashion, but at least a few of them should be included in the standard symphonic repertoire. However, that has yet to take place, at least in the United States.  Symphony No. 2 A London Symphony and Symphony No. 5 are the most frequently performed, and closest to being in the canon. Symphony No. 7 Sinfonia antartica (an Italian spelling) is rarely performed — but we might ask why?

The music is certainly atmospheric, visceral, and creatively orchestrated, but perhaps its practical (but not necessarily conceptual) origin in film music has played some role in its rarity. Another reason for its infrequent appearances on concert programs: the large array of forces required. The music derives from what Vaughan Williams wrote for the film “Scott of Antarctica,” which was released in 1949. This film depicts Englishman Robert Falcon Scott’s ill-fated expedition (1910-1912) to the South Pole, in which he and others perished in the icy vastness in late March 1912 from starvation, exhaustion, and extreme cold.  Scott was a Royal Navy officer.

Symphony No. 7 was first performed on January 14, 1953, and is in five movements. A crucial and substantial organ part appears in the third movement, and a wordless soprano soloist and sixteen-voice three-part women’s chorus appear in the the first and last movements. In this performance, the optional literary quotation for the start of each movement was omitted. This replicated the premiere of the symphony, which did not include the brief quotations, which were inserted later; evidently they were never required to be part of a performance.

Music director and conductor Robert Baldwin sculpted and shaped the symphony with confidence and care. The interpretation emphasized the architecture of the work, but never at the expense of detail and phrasing.

The first movement is titled Prelude — Andante Maestoso. It was superbly choreographed, with the wind machine and wordless female chorus (from the University of Utah) tellingly unified. The soprano soloist was Emily Nelson, a doctoral student at the University of Utah School of Music. Here voice is superb for this small but crucial role that signifies the beauty in the vastness of the Antarctic landmass. The second movement is a scherzo, and is marked Moderato. It was propulsive from the start, with the brass, especially the trumpets, on fine form. The percussion section created a cloud of textures. There was something close to a transcendental moment: the projection of cymbal, bassoon, tuba, and unison strings in the closing measures.

The third movement is titled Landscape — Lento, and is the heart of the symphony. A sense of implacability hovered over it — as it should. All of the organ entries (played by Ken Udy) were finely mixed, balanced, and most convincing, with excellent ensemble unity in forte passages. The organ created a truly awe-inspiring sonority, and the concluding uptempo section generated a pulsing sense of limitless space.

There was no pause between the third movement and the fourth, which is an intermezzo and is marked Andante sostenuto. Here we heard a sublimated gleam to the strings, with the otherworldly atmosphere caught from the first bars.  Trombone entrances were suitably implacable and blinding. The final movement is titled Epilogue: Alla marcia, moderato. A sense of symphonic architecture reigned, with telling details — such as the machine-gun like interjections of the snare drum during the wordless chorus, joined with the wind machine. The sounds of the wind machine were exceedingly realistic, and folded into such a soft ending, but one that was so atmospheric and so emotionally intoxicating in its bleakness.

This performance of Sinfonia antartica by the Salt Lake Symphony was most illuminating, and, according to this reviewer, one of the candidates for best symphonic performance of the year so far.