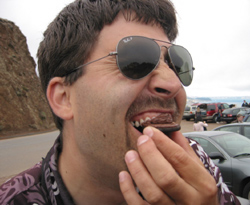 Blake Wigdahl has been the VP – Design & Programming at Thanksgiving Point since 2008. In his role he manages all programmatic elements of Thanksgiving Point’s property including design, education, exhibitions, public events, professional education, and volunteers. Prior to joining Thanksgiving Point, Wigdahl gained experience at museums from around the country. During 2007, he managed the Monet to Picasso traveling at the Utah Museum of Fine Arts. From 2003 to 2007, he was a project coordinator at the Teacher Institute at the Exploratorium in San Francisco, a world leader in science education. Previously, he worked at the Museum of the Rockies in the education and visitor services program until 2003. Wigdahl graduated from John F. Kennedy University in 2006 with his Masters of Business Administration with a focus in Museum Studies. He received his Bachelor of Science in Anthropology from Montana State University in 2000. Outside of work, he spends his time with his beautiful wife, two dogs, and cat exploring the world and maintaining a passion for the great outdoors, film, art and science.

Tell us about a piece of art or object in your home growing up that you remember:

I have two objects/art pieces from my home growing up that are forever connected. The first is a yellow Pennent coral fish made out of painted welded steel. My parents used to live next to an artist who welded crazy sculptures. My brother and I would spend hours watching him create works in his garage. He created the fish sculpture from a picture my parents took scuba diving in Hawaii. It has a lot of life to it as a metal sculpture but it also connects to the second object I remember from that same time period. Around the same time, while hiking in the mountains with my family, I found a flat rock with the coolest looking mix of colors left by all kinds of things – the rock itself, lichen, etc. I brought it home and showed it to our artist neighbor thinking it really looked like a work of art. To my amazement he agreed and on the spot welded a stand for my found piece of art. Both are still on display in my parents’ house.

I grew up in Utah but never spent much time in downtown SLC. When I moved back here from San Francisco, I wanted to keep the urban lifestyle, so I settled into the 9th & 9th neighborhood with my wife and we can’t imagine living anywhere else. There are so many cool buildings in downtown Salt Lake even though we don’t have the most unique cityscape in the world. My favorite building comes from not its architecture but what it accidentally creates across the street from time to time as the sun is setting at the right angle. On 200 South between 200 East and 300 East two buildings create the coolest light art I’ve seen downtown. The photo is one I took this fall…the glass on the building across the street can bend the infinite number of individual images of the sun in very interesting ways. 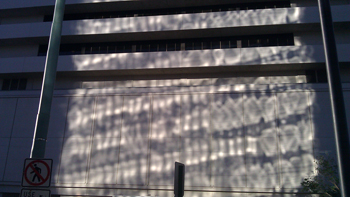 This personal passion for light came from my experiences with Bob Miller, a light artist from the early years of the Exploratorium in San Francisco. Bob took me on many light walks through the streets of San Francisco showing me how to look at the world differently – a powerful experience that inspires me today when I walk through downtown Salt Lake City. I’ve never been able to look at the world the same since and I am very thankful for it.

The most memorable exhibit I’ve seen recently was actually an entire museum – the American Visionary Art Museum in Baltimore, Maryland. It is one giant work of art and it would be impossible to pull out any one part of it. Walking through the museum was like stepping into the internal organs of a collage. The museum is filled with creative energy and grassroots art projects – some of my favorites were works created by anonymous artists that donated they’re works by leaving them on the front doorstep of the museum one night and a giant whirligig art car outside the front of the museum. You can see and feel the passion for what was created in that museum and it was very powerful. Amazing and inspiring for someone like me interested in art and science.