Salt in a Wound: Levi Jackson’s search to introduce the positive 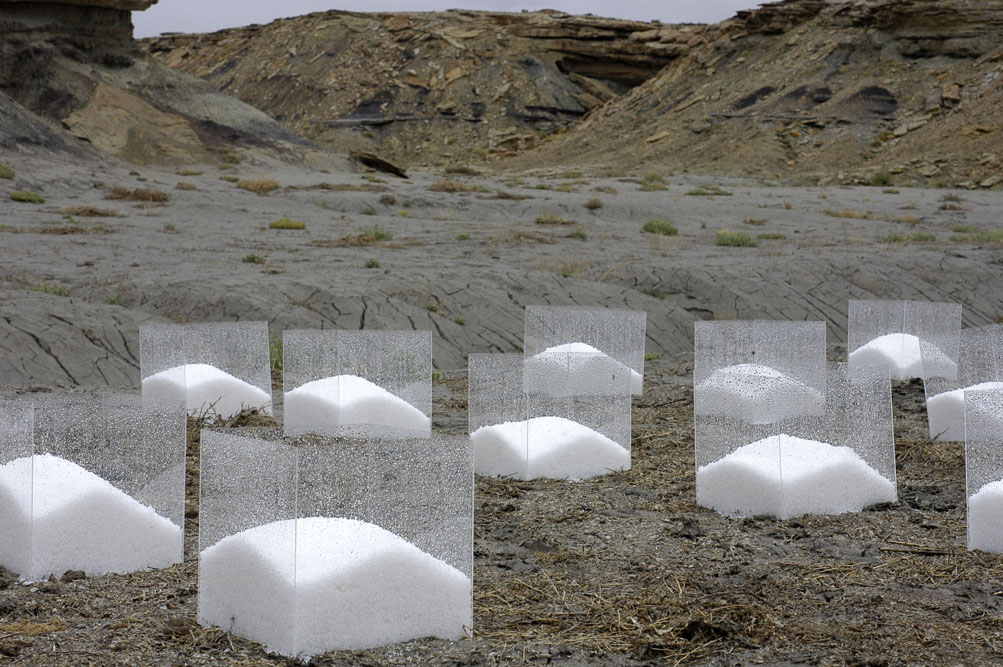 A little extra salt in the landscape is the last thing the Caineville Wash area needs. The land there is already overly saline and erosion by off-wheelers in the area threatens to increase the runoff of salt into the streams and ground water. Recently, though, Levi Jackson, a sculpture student at Brigham Young University, hauled mounds of salt into the area as part of an art project.

Jackson, who was looking for a land site under environmental distress so that he could attempt to reintroduce the original circumstances and convert a negative experience into a positive one, approached a member of the Southern Utah Wilderness Alliance for possible locations. Of the suggestions he was given, Jackson was drawn to the site in Utah’s badlands near Caineville. “It just felt right.”

In the 1950s oil companies drilling in the area mistook a salt water reserve for oil. When they realized their mistake and moved on to the next likely prospect, they failed to cap off their pipe. For the past sixty years salt water has leaked from the hole into a nearby stream and the surrounding land.

In his project, entitled Reintroduction, Jackson wanted to repeat the same variables of the original act, but in a positive way. He reintroduced all the elements of the original act — Human, Earth, Salt, Water — and attempted to make something beautiful out of it. “I took salt down to the landscape and placed one foot cubed plexi-glass boxes in a pattern and filled them up with salt.” The boxes represented a level of control and management not present in the original act, and their arrangement turned what was once a commercial act into an aesthetic one. The installation was temporary, lasting only the thirty minutes the artist needed to document it.

The salt, however, was left behind. “It’s not so much about the environmental concern,” the artist explains, as an attempt to transform the original act. “I am a human and I can use the same elements that were negative and turn it into something positive. I believe that instills a little bit of hope.” While the oil company has left behind a permanent wound, Jackson’s salt will quickly dissolve and become part of the earth, leaving behind, he hopes, the positive spiritual nature of his act.

An installation of salt in glass cubes along with documentation of the original installation is now on exhibit at the Harris Fine Arts Center on the BYU campus through June 15th. A closing reception for the exhibit, entitled “Reintroduction” will be held June 12th, 7 to 9 pm. The project was made possible by a grant from ORCA and materials from the Great Salt Lake Mineral-Compass Minerals.