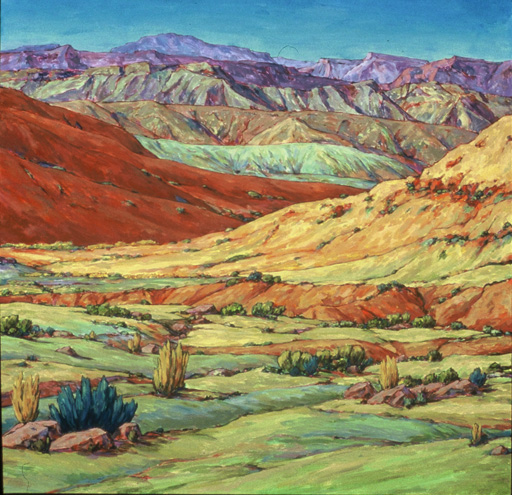 Royden Card roams the deserts of Utah with a sketchbook, carving art from the rugged redrock landscape. Winds, rocks and sun are his silent partners as he explores the desert, looking for inspiration. Then, an ocotillo plant shivers in the breeze and waves its long branches like fingers. Beyond the ocotillo is another gorgeous vista, an example of the type of poetry in stone Card captures in his paintings.

“I have a fascination with redrock deserts and also the badlands of Utah, Nevada and Arizona,” said Card. “I like some of that strange, desert work.” 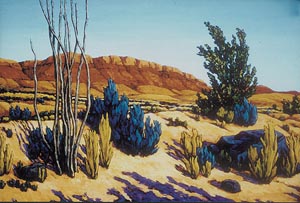 Card’s strange, enchanting paintings and woodcuts can be viewed at A Gallery, 1321 S. 2100 E. in Salt Lake City, from February 9th-28th. The solo exhibition will contain over 35 acrylic paintings and 35 woodcuts with a top price of $6,000, according to Brent Godfrey of A Gallery, which has represented Card for the past five years. Godfrey said the success of Utah painters such as Card is emblematic of a revolution occurring in the art world, one that promises to expand the known world in art beyond New York City into smaller cities such as Salt Lake City.

“It used to be if you were a killer artist from Wyoming, none of the right people would see you,” said Godfrey, himself a painter and co-founder of A Gallery. “But—anymore—between the internet, the ease of communications and the global setup, you can be important here.” According to Godfrey, Card has made the leap into national prominence. Card has seen his paintings and woodcuts hang in the Smithsonian Institution Library, the Utah Museum of Fine Arts, the LDS Museum of History and Art, and museums in Ohio and Illinois.

Card, a Utah native, first appeared on the Utah art scene in 1984. He has spent the last twenty years creating art inspired by desert landscapes, be they in Southern Utah, Nevada, Arizona, the Holy Land of Israel or the ancient sites of the Pyramids in Egypt. Card, the father of six, is a consummate artist of the desert. Even in his teenage years, Card had already decided to become an artist.

As a teenager I was fascinated with Van Gogh,” Card said, describing the pivotal moment when, as a 14-year-old, he chose to devote his life to art. “I read Lust for Life and I loved the movie The Agony and the Ecstasy. I was always looking at Michelangelo drawings.”

Enter into the world of Card’s paintings and woodcuts. See the thick, meaty lines in the woodcuts where he captures the essential nature of some place, be it the solitary pipes of “Castle Valley,” or the ominous hulk of the Fisher Tower rock formation.

The woodcut represents a valuable medium for the artist because a woodcut is a printing device. Using it, the artist can sell multiple hand-printed works from a single carved block. Setting aside the favorable economics of the woodcut, Card has achieved a rare art in his technique of using light and shadow in these works, such as his strangely affecting woodcut “Lake of Salt” |2| that implies an island standing in the mist surrounded by the hyper-reflective salt water of the lake.

In Card’s paintings one sees dramatic landscapes, always haunted by deep blue shadows, signs of cold and desolation, such as the haunting and deeply saturated colors of “Near Toquerville” and “Solitude Wash”. His paintings achieve a magic effect that is extraordinary and effective.

Near Toquerville by Royden Card

Contemporary artists know how competitive the art world is now and always has been, going back to the Salon des Refusés. A gallery owner has the unenviable chore of running a business while attending to the hopes and dreams of innumerable artists who aspire to having their own solo show.

“There are thousands of artists who would like us to [give them a solo show],” said Godfrey. “But it has to be work with integrity and work that I feel in my gut is worth the energy that I’m going to apply toward that artist. The work has to seem logical.”

At every step in the value chain, the artist faces appraisal, judgment and the eye of the beholder. This analysis is undertaken because every step of the process means dollars—dollars to put food in the mouth of the painter, dollars going out so the collector can feed his ego, dollars to increase in value as the painting appreciates.

“There’s no guarantee of sales,” said Card. “I think the hardest part is not knowing if [sales] are going to really happen. I’ve had to live off credit cards about seven months since 1996—about seven months during those whole times.” 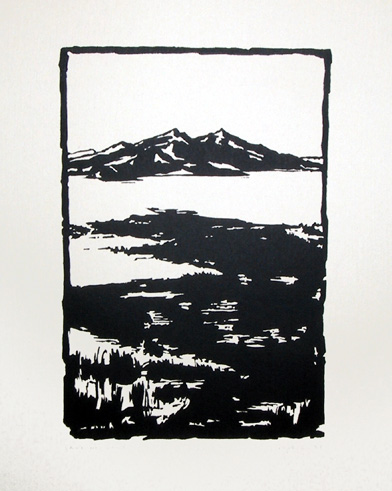 Before 1996, Card was an artist with two day jobs. He supported himself and his family by teaching printmaking at BYU and by running a small business.

“I taught for 16 years at BYU, part-time faculty,” Card said. “Also, during part of that time, I ran a small flower business that I seem to have gotten myself and my wife into at that time in our lives.” The immensity of the difficulties in his life at that time led him to look with disdain on the artist life, and he described how he would have reacted if one of his children showed signs of picking up a paintbrush.

“I was thinking—as I was going through some of the struggles—still working at BYU, still working the flower business and working in my studio,” Card said. “That if any of my kids wanted to be an artist I would break their fingers. Teach ‘em a lesson.”

The successful painter has dozens of mothers and fathers, all of whom have contributed to their success for years. Young painters see signs of overnight success and feel resentful, like orphans who have been forced to fend for themselves.

“People assume there is an easy path to success,” said Godfrey, who described himself as a successful painter after twenty years behind a palette. “[When you’re starting out,] the stories you hear about, they always make it seem like an overnight success. In art, success comes at a terrible price and you have to pay [the price] consistently.”

Royden Card’s work will be on display at the A Gallery February 9th – 28th, with an artist’s reception on the 9th and a public reception on Gallery Stroll, Friday February 17th.

Tagged as: "A" Gallery, by Tom Hunter, Royden Card