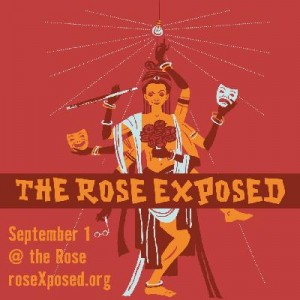 In some September editions past we’ve included a seasonal performing arts preview – half a dozen paragraphs describing various dance, music and theatre groups and what you might expect to see from them in the coming months. Some bright person out there has come up with something better: Rose Exposed. It’s an all-day event that gives you the opportunity to experience the variety of performing arts groups resident at the Rose Wagner Art Center in Salt Lake. And it happens this Saturday, September 1.

The six companies represent the pinnacle of their art forms and span the worlds of dance, theatre, and music: Gina Bachauer International Piano Foundation, Plan-B Theatre Company, Pygmalion Theatre Company, Repertory Dance Theatre, Ririe-Woodbury Dance Company, and SB Dance. There will also be representation from Spy Hop, one of  the Rose Wagner’s frequent renters.  Rose Wagner Performing Arts Center is located at 138 West Broadway (300 South) in Salt Lake City. Over 50 artists, performers, and teachers are involved in this celebration of the performing arts.

“In 1983, RDT began to dream of a performing arts venue that would be a laboratory for artists in downtown SLC,” says Linda Smith, founder and Artistic Director of RDT. “In 1997, that dream was realized and the Rose is now  a ‘gem’ of a space and a great resource in the community.”

Free classes, activities, and performances suitable for all ages will be presented from 9:00 am until 5:00 pm. At 7:00 pm and 9:00 pm, audiences can sample the upcoming seasons of the six companies in The Rose Exposed Variety Show for $10. Tickets are required for both free and paid events and are available at www.roseXposed.org.

“This day is going to be like the circus rolling into town,” says Stephen Brown, Director of SB Dance. “There’s something for everyone –  from Peter and The Wolf for kids to a late-night smorgasbord show for adults.”

This epic day is a first of its kind in Salt Lake City, and indeed, is unique nationally. According to Shirley Ririe, co-founder of Ririe-Woodbury Dance Company, “It is seldom that six disparate and successful companies share a space and get along so well. Come and see what is so captivating about being in the Rose! The Rose is such a lively place with exciting performances and classes going all day and into the night, every day. We are anxious to share the building and its events with the community ”

Descriptions of free events currently scheduled from 9am – 5pm (others TBA):