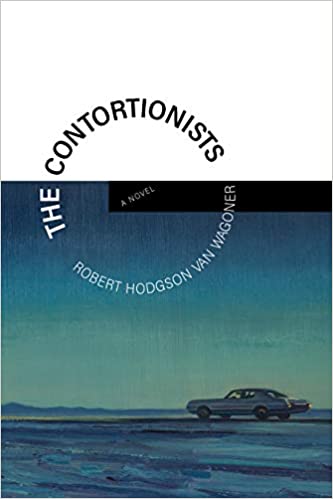 Robert Hodgson Van Wagoner’s evocative, disturbing, dark novel, The Contortionists, has won this year’s 15 Bytes Book Award for fiction. The novel, which the author has described as a “literary crossover,” injects the tension of a suspense novel into the world of fully fleshed characters, deep context and richly described settings of a literary fiction.

The novel is propelled forward by the disappearance of a five year-old boy who goes missing on his way to a birthday party. His tight-knit community on the prosperous east bench of Ogden, Utah is thrown into panic and disarray as a grizzled detective investigates the case.

The core of the novel’s rich development is the examination of the Latter-day Saint family at the heart of the drama.  Pivotal to the story are the lives and marriages of two sisters: the boy’s aunt, who left her LDS mission in Norway to live with a man she met there, and the boy’s mother, who stayed close to home and married a lost sheep everyone was eager to bring back into the fold. While tensions build towards the novel’s disturbing climax, the narrative shifts back and forth in time and perspectives to examine the lives of these troubled individuals, exploring issues of substance abuse, sexuality, religious excess and mental illness.

The Contortionists is both a page-turner and a deeply moving — and frequently disturbing — examination of a family that must come to terms with the fissures at its core.

Published by Signature Books, this is Van Wagoner’s second novel. The first, Dancing Naked, was published in 1999 and won the Utah Book Award. Van Wagoner, who lives in Washington, grew up in Utah, where his father, Richard Van Wagoner, was a professor of painting and drawing at Weber State University for many years.