Robert Asay and Megan Greer Use Art to Explore a Diagnosis 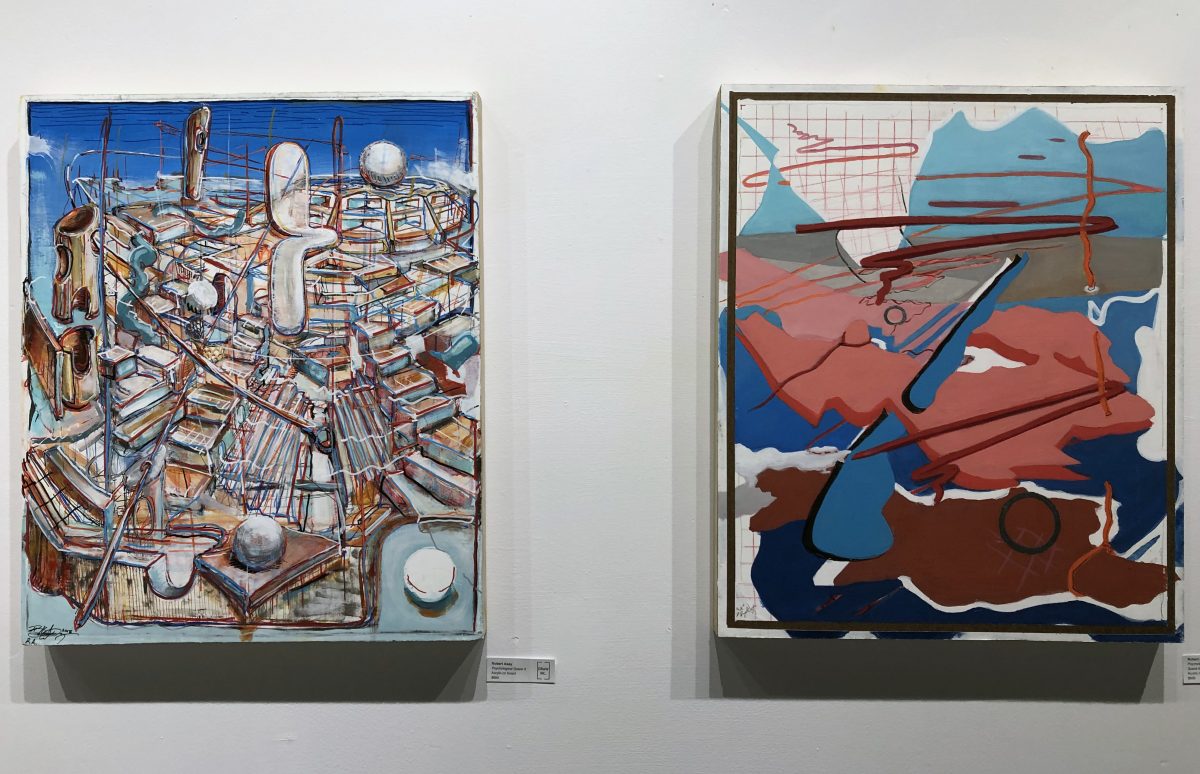 Entropy and Healing, currently on view at Draw Inc., features paintings and drawings by Robert Asay and stained glass by Megan Greer, works created in response to Asay’s recent diagnosis of epilepsy. The artists, who are partners, say they’ve used the act of artmaking as an avenue for meditative focus and healing exploration.

On the south wall of the small but open gallery space, six 20” x 24” acrylic paintings by Asay utilize variations of the primary colors to depict organic and geometric shapes working their way through levels of structured space. The paintings are displayed chronologically from left to right in the order they were created. Asay says, “The first five were being developed as my seizures continued. The final painting in the sequence, “Clarity,” was started and finished after being seizure free for about five months “

The series begins with a painting of organic shapes that reference the body and float on top of a receding red to blue background that alludes to landscape. Forms made from deep reds and blues play on the canvas and reference the body by evoking veins, fluids, or limbs. Additional line work in blue, yellow and red coming from the top center of the canvas toward the viewer implies the beginning of movement and gives the basis for structure and containment of the figurative shapes. In contrast to later work in this series, the brushwork is looser and feels like the work wants to give room for these organic forms to take shape and stretch. As the series proceeds, these organic shapes vacillate between being fluid or geometric and the environments within which they move on the canvas become tighter and more compact. The landscape becomes encased with bolder geometric forms. Rectangles, spheres, stacks of squares and tubes turn into loud actors and play a larger role as they attempt to structure and contain the space that the figurative shapes try to move through and around.

Movement, energy, and a search for ways to allow the puzzle pieces to flow and fit seems to be the language these pieces speak. By the end of the chronology, balance is found as the background structures and organic moving forms begin to mirror each other in depth, brushstroke, and geometric inlay. 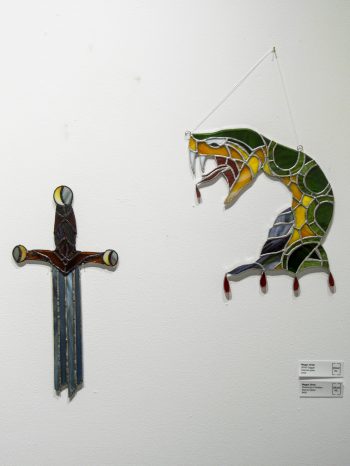 A collection of Greer’s glass work on the north wall seems to visually support the initial series of paintings. Greer, who says her work comes from a “very deep place of personal healing and self-analysis,” used the methodical focus necessary when working in stained glass as a tool for contemplation while she reflected on a year of challenges. Her figurative pieces, which range from approximately twelve to twenty-four inches, float on the wall and give a sense of figures that attempt to move, but are caught in a fixed moment. An image of a handshake between people of different skin tones, for instance, is captured at a point of stasis. Other works are paired and consist of figures that respond to and mirror the objects with which they share a space. Sharp features like fangs or blades act as defenses against the possibilities represented by the static objects. In one pairing, a snake turns to look at a sword, confronting it with an open mouth, its two fangs mirroring the double-tipped sword.

Both artists in this show use artmaking as a way to format and reframe anxious experiences. Their visual languages reference attempts at movement as a response to constraints, an artistic quest for balance that reflects the desire for healing and understanding during difficult times.