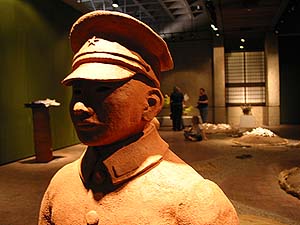 In this “Grab, Gulp and Go, Life in the Fast Lane” society we live in, it is often difficult to find something of substance and value. The Etsuko Ogura Freeman exhibit, RITUAL-CEREMONY-IMMORTALITY, at the University of Utah’s Alvin Gittins Gallery, has real substance, plus much more.

The work on display at this exhibit, which took place at the end of May, is enhanced with underlying currents of ancient cultural traditions. Metaphysical concepts such as Time, Death and Afterlife are evident. The exhibit challenges the fortunate observer to study not only the richness of the surface textures, tones, and colors of the individual pieces, but also the psychology and religious connotations of the parts and their organization as a whole.

Etsuko Ogura Freeman is of Japanese descent and conveys her cultural and Buddhist belief systems openly in the installation. We are all familiar, to some extent, with the oriental tradition of ancestor worship. This exhibit is about family and ancestors. 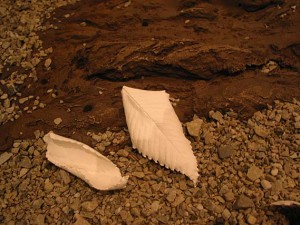 In RTUAL-CEREMONY-IMMORTALTY, the observer passes through the metal gates of the Alvin Gittins Gallery and enters a sacred burial site. Incense wafts in the air, the lighting is minimal, the objects are serene as if at meditation. There is no conflict here, only peace and beauty. The viewer is silently called upon to slow down and enter the site in reverence.

The installation is carefully arranged and orchestrated. A flowing “river” of crushed gray stone meanders across the central axis of the space. It represents a River of Time. The first groups of objects encountered at the head of the river are three Haniwa Figures sculpted in terracotta. Haniwa figures are ancient Japanese funerary figures used to protect the dead. They were included in burial sites, before Buddhism was introduced, to depict familiar things relating to the deceased in order to ease the transition between life and death. The figures represent a child and mature male and female personages. 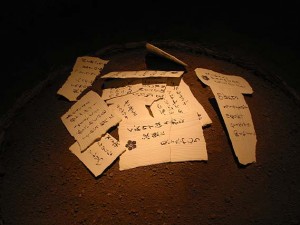 Placed within the river are eight Ancestors, depicted by heavily textured stoneware bark slabs and slip cast porcelain wood textured slabs. Freeman chooses wood to represent her ancestors because the tree is felt to be the oldest living thing and has the most spiritual energy. Placed on and adjacent to the ancestors are leaves, persimmons, and lotus roots, indicating the particular season of an ancestor’s passing. Leaves also represent the passage of the seasons. While the ancestors are anonyms to the observer, they are depictions of actual relatives of Freeman. She has carefully chosen the clay bodies, textures and firing techniques used for each piece to represent their personalities, genders, ages and personal histories. 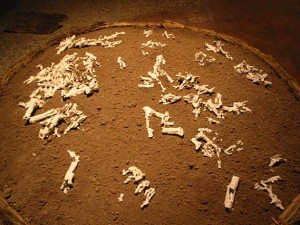 The viewer encounters three burial mounds along the path of the river. The river connects the mounds in time and signifies the association of the recently departed to those who died in the past. The mounds consist of rich, dark brown soil, ringed by hand woven reeds. The first mound has several slip cast porcelain wood textured slabs featuring carefully brushed Japanese calligraphy. The second mound features both slip cast porcelain wood textured slabs with script and slip cast porcelain root forms. The root forms suggest ancient bones exposed by the erosion of wind and rain and long bleached by the sun. The third mound exhibits slip cast porcelain bone shapes, which are smaller than the previous, symbolically having been exposed to the elements longer and thus reduced in size. 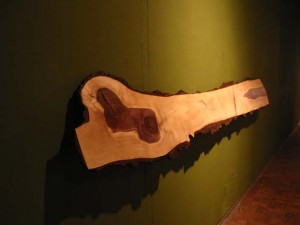 Alongside the river on the west gallery wall is a large slab of wood. This represents a prayer, which serves to ease the sorrow of the dead and offer hope for eternal life.

Along the east wall is a row of four sculptures representing seasonal offerings. The first is Persimmons, an autumn offering. Next is Eggplants, a summer offering.  Then, Bamboo Shoots, a spring offering. And finally, Lotus Roots, a winter offering.

At the end of the river is an altar with an incense burner against a paper screen background. The incense burner consists of a chocolate brown hand-formed bowl, supported by the same brown clay used to sculpt intertwined tree branches.

Adjacent to the altar, is a Karashishi, consisting of a large gnarled tree trunk arranged with flowers and leafed branches. The Karashishi represents a guardian, complementing the altar and enhancing the whole installation. 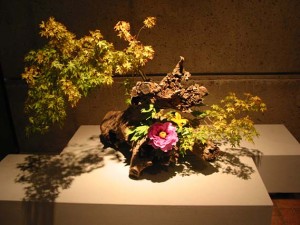 Another Karashishi is placed at the opposite end of the gallery space and consists of a floral arrangement on a slab-built sculptural base.

After seeing all the pieces, and being in the burial site for a time, the viewer becomes saturated with the aura of the place. A sense of calm and well-being permeates the air. One feels meditative and serene. The aesthetic experience is very strong. One is compelled to linger in quiet solitude and ponder the mystery and miracle of life.

Freeman says, “Everything that has a shadow goes back to dust. I’m interested in what happens to that dirt afterwards – it goes into plants and trees. It is a continuation of life that is being expressed through my work”.

The exhibit is well conceptualized and well executed, and works as an integrated whole. The gallery space is well suited for the installation. The brick flooring, textured green sidewalls, exposed concrete structural columns and concrete and wood ceiling all lend to the natural and organic. 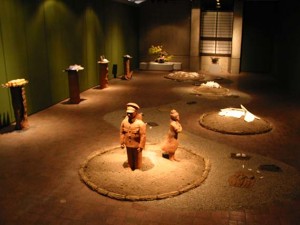 Ritual-Ceremony-Immortality serves as a good example of what a thematic art show should provide to the viewer.