Rites of Democracy @ the Pickle 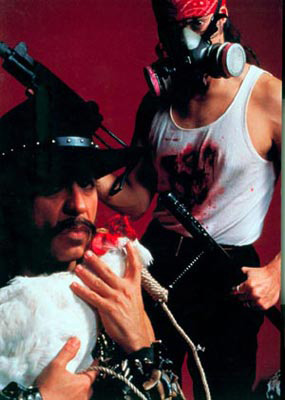 Raised in Mexico City, Gómez-Peña, the first Chicano artist to be awarded a MacArthur Foundation Fellowship (“Genius Award,” 1991), has blazed new paths for experimental performance. His pioneering work in performance, video, installation, poetry, journalism, cultural theory, and pedagogy explores globalization, cross-culturalism, immigration, and the politics of language. His work has been presented around the world.

In 1993, Gómez-Peña helped found La Pocha Nostra, a multidisciplinary arts organization, based in San Francisco’s Mission District, which views performance as an effective catalyst for thought, debate, and public dialogue. La Pocha Nostra specializes in performances about globalization and inter-cultural identity, believing that crossing borders on the stage may be the first step to crossing them in larger social spheres. “To us,” La Pocha Nostra’s mission statement reads, “the artist is above all, an active citizen immersed in the great debates of our times. Our place is in the world and not just the ‘Art World.’”

La Pocha Nostra will bring this philosophy of art as activism to Salt Lake. Gómez-Peña and La Pocha Nostra core members Roberto Sifuentes, an interdisciplinary artist from Los Angeles who graduated from Trinity College, and actress and performance artist, Violeta Luna, will conduct a three-day, hands-on workshop at the Pickle Company, exploring performance art as a form of radical democracy.

The workshop begins with a performance of the groups riveting , Mapa/Corpo: Oppositional Rites for a Borderless Society, on Saturday, March 17th at 8pm. An interactive performance installation developed in response to the post-9/11 “era of terror,” Mapa/Corpo is a living diorama that explores the current occupation of Iraq through a symbolic mapping of the human figure. This poetic, multimedia work examines the body as occupied territory, inviting the audience to participate in a ritualistic process of decolonization. La Pocha Nostra began workshopping Mapa/Corpo in 2003, immediately after the invasion of Iraq. This particular version, perhaps the most complex to date, was developed in Dublin and London. Featuring Gómez-Peña, Roberto Sifuentes, and Violeta Luna in collaboration with local artists and audience members, Mapa/Corpo is constantly alive and evolving. (to view a previous performance click here; warning: this video contains nudity)

In Guillermo Gómez-Peña: Sophisticated Seduction, Carol Becker has written that “Guillermo Gómez-Peña’s work navigates the contested terrain known as the US/Mexican border. By telling a story of realities, he acts as a warrior in transnational identity and immigration issues. As El Mexorcist Gómez-Peña assaults the construction of the US/Mexican border that is lined with Minute Men, rising nativism, three ply fences, globalization, and transnational identities.”

Rites of Democracy will continue to explore issues of borders and multi-culturalism Sunday the 18th at 2pm with An Afternoon of Video Graffiti and Spoken Word Roulette with Guillermo Gómez-Peña at the SLC Film Center. Gómez-Peña will be presenting selections from Ethno-techno: Los videograffitis. In this project, the artist invited film and videomaker colleagues from around the world to re-envision his own performance works through a collaborative editing process. “Ethno-techno…” is a conceptual DVD comprising over 40 performances created specifically for video. The videos were originally created to be shown as a media installation in the shape of a “video Juke-box”, and the user can retrieve them by author, title or subject matter. It’s a complex multi-media piece involving 9 filmmakers and over 30 performance artists from around the world.

La Pocha Nosta’s stay in Salt Lake will end with Conceptual Lab of Hybrid Art and Critical Culture, a three-day community workshop on performance art as radical democracy, Monday, March 19 to Wednesday, March 21, 12 to 8 pm. Since 1993, Gómez-Peña and La Pocha Nostra have conducted innovative workshops that bridge cultures, generations, and disciplines to create “ephemeral communities of rebel artists.” Drawing from multiple traditions, including experimental theatre and dance, ritual performance, and shamanism, this workshop will help participants develop a hybrid persona and a performance piece based on their own complex identities, personal aesthetics, and political tribulations.

Designed to build bridges between marginalized cultures, this workshop will bring together a diverse group of community members and students in a deeply personal engagement with art and politics. No prior performance experience is required, but a great deal of willingness to experiment is fundamental. To register for the workshop, or for more information, please contact info@thepicklecompany.org or call 801.450.8977.

Tagged as: The Pickle Company