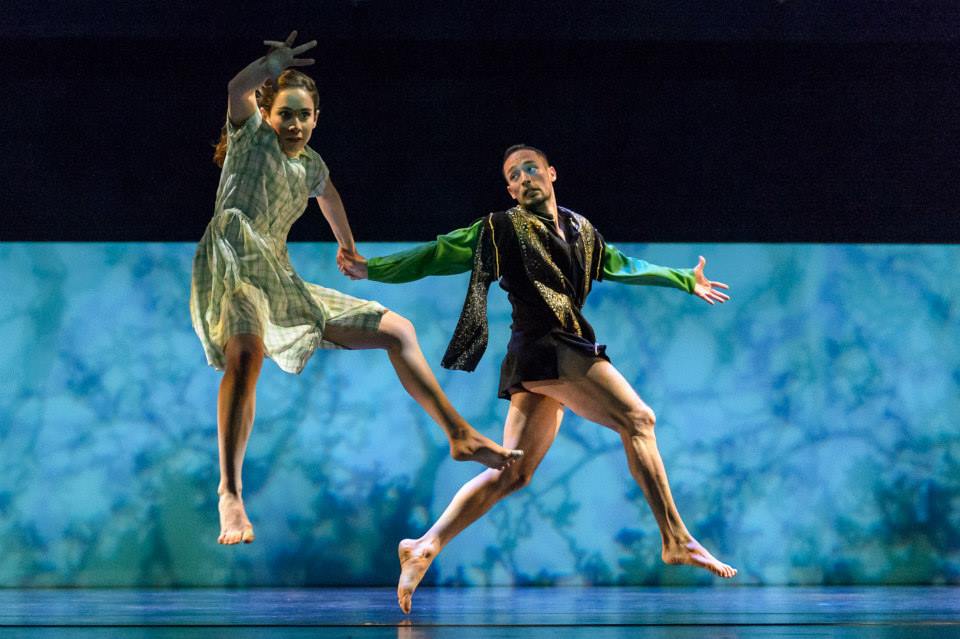 Ririe Woodbury’s Spring Season was a challenging program exploring abstraction as a method for viewing as well as moving. Artistic Director Daniel Charon’s program note suggested a hope for his premiere to be taken as an experience without a need for definition while visiting artist Netta Yerushalmy suggested that her work would be cumulative as well as contradictory. In that way, each artist met their own measure if still finding a predictably uneven audience response.

Daniel Charon’s premiere carefully explored the 53 musical phrases inside of Terry Riley’s highly structured musical score, “In C,” performed live by the Salt Lake Electric Ensemble. Modern dance is no stranger to looping electronic music accompanying contemplative moving systems, but hearing the score live was a welcome addition. SLEE’s presence generated an enthusiastic musical audience to whom the dancing was purely new while serving as a reminder of how many elements go into ultimately ambient sounds.

“53 Rooms” highlighted the six company members within various framing created by thirteen dancers from the University of Utah. The dancing develops organically alongside the musical composition and, in that way it reminded me of “Water Study,” another dance which only unfolds as its given concept allows. When I first saw “Water Study” (albeit in 6th grade) I thought was the most boring dance of all, and now, it’s one of my favorites. I suspect that “53 Rooms” is another piece that may continue to offer ideas from within itself, and, as anything which sticks clearly to its idea, will be something you either take or leave.

“NORWEGIA” a premiere by Netta Yerushalmy, is an interesting companion to “53 Rooms” as it utilizes a seemingly more arbitrary set of circumstances. Dancers are as likely to appear doing a gestural duet in leggings as they are diving blindly into space wearing fairy wings or a Shakespearean blouse. And, after several sections featuring divergent scenarios, viewing an ending of sparse (and articulate) duets and solos amplifies the quiet presence of each dancer — Yebel Gallegos and Melissa Younker in particular — as each finds footing and explores extension.

Tension emerges throughout the work as the decision making of earlier scenarios appears artificial but bumps against social truths. For instance, Mary Lyn Graves begins the dance sloppily sneaking around the orchestra pit in a black hoodie and later transitions into more virtuosic sequencing in cherry red underwear. Her performing body is able to move between these identities swiftly and even comically. However this imagery interfaces with a larger cultural context: consider that Trayvon Martin was killed while wearing a black hoodie containing a cherry red bag of Skittles, his physical identity less mutable.

In a different section, a visual pseudo-forest emerges from the ceiling and the cyc and the physical decision making appears on some level whimsical, and on another, out of control. The dancers perform affected mannerisms of inwardly turned wrists and unstable yet fixed joints. Within their new environment, it appears again that the performing body is free to move between identities with fluency, behaviors shifting from manically impulsive to technically stable. Again, when positioned in a larger context the material serves as a reminder that these postures aren’t so much quirky as they are referential to physical and intellectual disability and its frequent invisibility in concert dance. While the tension in limbs and abject expressions of the performers are handily replaced by a lift or balletic posture in the ever shifting utopia that is “NORWEGIA,” many people you see publicly moving this way have a profound longing for control of their face and limbs but may only see slight shifts over the course of their lifetime.

I can’t say that these cultural signifiers registered for all, if any, other audience members. But they remind me that to challenge how meaning is attributed is also to learn that meanings are not only multiple and layered but also competitive.

Ashley Anderson directs loveDANCEmore projects as part of her 501c3, ashley anderson dances.  This review, and others by loveDANCEmore are in collaboration with 15 BYTES.

You can see our video interview with choreographer Daniel Charon and members of the Salt Lake Electric Ensemble here.