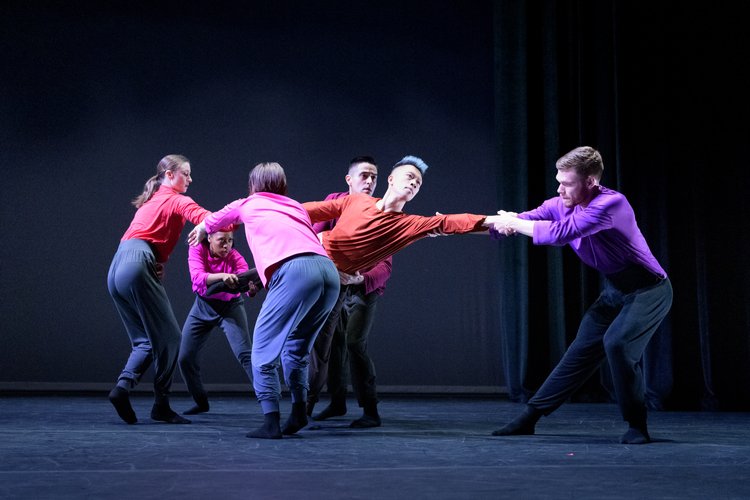 The drive to the new Mid-Valley Performing Arts Center involves a turn off Redwood Road to a straight shot down 5400 South’s Flex Lanes – the middle lanes in the road are marked solely with dotted yellow lanes and a light indicating which direction of traffic is allowed to occupy that lane at any given time of day. Ririe-Woodbury’s latest show, Lo and Behold, involved a similar journey — a turn from solid colors and fast, straight lines into something more permeable and ambiguous.

The final show of their 2021-2022 season opened with a new piece by Daniel Charon in all his (Doug) Varone-iest glory. Swirling limbs, interweaving pathways, and a ringing minimalist score from John Adams held The Break of Day firmly in the light. With no attempt at pretense, the piece was just bodies moving beautifully and joyously in their own physicality.

A final eddy in the movement gathered the dancers into a quietly-decelerating cluster, with lights fading and Adams’ gramophone slowly winding down. This signaled a tonal shift in the show towards more shadowy, somber fare. Culture Mill (a performing collective based out of North Carolina and headed by Murielle Elizéon and Tommy Noonan, with collaborator Clint Lutes) choreographed Bodystorm. The piece was partially funded through the Parkinson’s Foundation, with the movement “informed and transformed by interactions with local people living with Parkinson’s Disease.” I would have actually liked to have seen those local people on stage alongside RW’s six young, able-bodied dancers, although I will acknowledge that I don’t know the specific functioning of that collaborative interaction or its constraints.

Bodystorm opened with Corinne Lohner walking onstage in silence, with the air of someone about to speak. The piece was scattered with quiet moments where the dancers seemed to choose silence just as words were about to leave their mouths. This resulted, at times, in a lovely shift and play between the silence supplementing, clearing space for, or obstructing what the dancers’ bodies were trying to communicate. There were also gestural moments that veered uncomfortably towards the repetitive-flailing-limbs trope in abstract depictions of mental health and disability. The score (arranged by Noonan) featured a polyphonic sampling of popular music and vocalizations layered on top of a gorgeous piece by early electronic music pioneer Éliane Radigue. Radigue’s music was primarily interested in slow patterns unfurling and evolving over extremely long periods of time. The listener’s interior experience of that time passing (and the effect it had on their disposition) was an integral component of her work. What was missing from Bodystorm, then, was perhaps a commitment to that journey through time — either a willingness to sit with the stillness for as long as it took or the ability to maintain a through-line of the energy in transitional moments without rushing forward or dwelling unnecessarily. 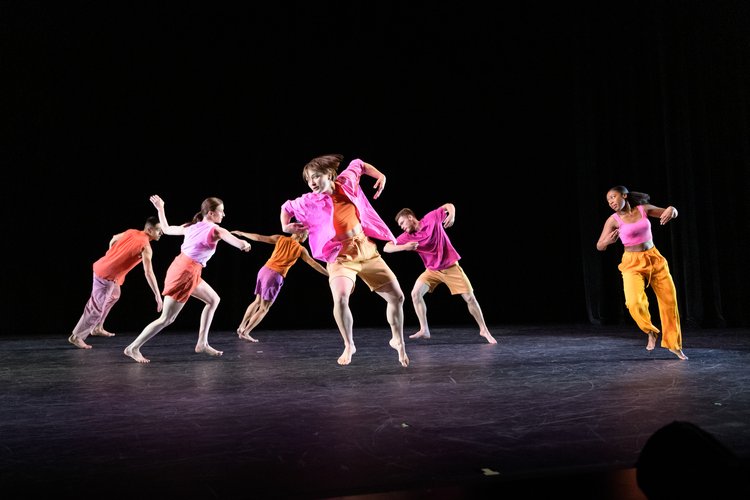 The show concluded with Yin Yue’s In the Moment Somehow Secluded — originally choreographed for the company in 2020 but delayed in its premiere until now. I mention the pre-pandemic genesis because the piece’s frequent use of juxtaposition between individual dancers and the (at times adversarial, supportive, or entirely disengaged) collective seemed to reference a Romantic understanding of Lone Isolation that we have put aside with the advent of our hard-earned understanding of Social Isolation. I tend to read program notes only after watching a piece, so I would learn later that this ostensibly had nothing to do with the choreography’s explorations of internal processes and how “subconscious personas” influence reality. But the forcefulness of the individual versus group imagery stuck with me. I still can’t decide if it was a welcome respite from post-COVID discourse about the State of Society today, or if it was a distracting holdover from a less nuanced time. Beyond that, the movement itself was beautiful if not deeply engaging, with some exceptional solo moments from Alexander Pham.

The lighting design (Jessica Greenberg and William Peterson) deserves a special shout-out, especially in the latter two pieces. The generally heavy atmosphere and corresponding dark stages for both dances were cut and at times transformed with strips, pools, daggers, and waves of light that moved and shifted beautifully. The costumes, in a recent stylistic trend I’ve seen with RW towards what you might call “color-blocking athleisure,” were slightly underwhelming. I’ve been watching so much DIY dance lately that I found myself craving more extravagance from a company with the budget able to meet that desire. A conversely wonderful trend in recent RW shows is the incorporation of visual art exhibits in the lobby, and we were treated this time around to a lovely display by Nora Lang.