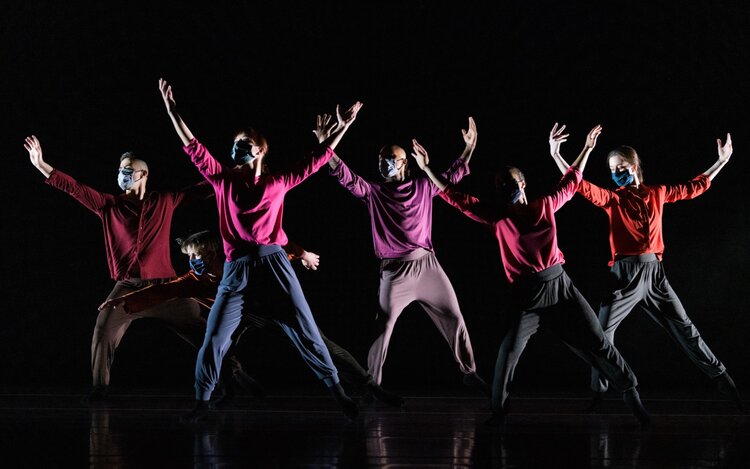 The company in “In the Moment Somehow Secluded.” All photos by Stuart Ruckman.

Ririe-Woodbury Cadence was pre-recorded and streamed as an on-demand performance.

The show proceeded after the company’s land acknowledgment, which read aloud the names of the Indigenous nations who have resided upon the lands presently known as Salt Lake City and the surrounding regions for millennia. The statement read: “Our organization recognizes the void of representation experienced by these [Shoshone, Paiute, Goshute, and Ute Tribes] and other Indigenous peoples, and through our diversity, equity, inclusion, and access efforts are committed to empowering change.” Most importantly, the statement concluded by offering actionable steps to take land acknowledgment beyond words. The acknowledgment of Indigenous lands needs to do more than merely state who the land belongs to. Indigenous land acknowledgments should foster relationships. As the company suggests, building a sustaining relationship asks the audience to become informed about the Indigenous peoples and true histories of the land upon which they reside. Further, only through engagement in Indigenous efforts towards reclaiming and protecting lands, cultures, and ways of life, can the central purpose of land acknowledgments begin to be fulfilled. Acknowledging stolen Indigenous land is only the first step in dismantling the systems of oppression that Indigenous peoples have survived and resisted for centuries in the Americas.

The performance ensued with three riveting dances all filmed onstage and created by renowned choreographers: Yin Yue, Charles O. Anderson, and Andrea Miller. Each of the dances was intricately laced with detail and the subtleties of the works were effectively relayed through the cinematic nature of the show. In its entirety, Cadence was riveting, soulful, critical, moving, and exhilarating.

The first dance was Yin Yue’s “In the Moment Somehow Secluded.” The piece was described  in the notes as “an external demonstration of an internal process, identifying and questioning the influences of subconscious personas on conscious reality,” and the dancing was as thought-provoking as this quote. The intricate patterns and partnerships which evolved were compelling. The opening duet between Dominica Greene and Nicholas Jurica was hypnotic. The dancers’ lower bodies were rooted in the floor and their upper bodies made sharp and dynamic gestures, all while maintaining a supple, feather-like quality. The duet was joined by Corrine Lohner and soon after the whole company was on stage with the entrance of Megan McCarthy, Bashaun Williams and Fausto Rivera. The rest of the piece unfolded with more duets, trios, and ensemble dancing. Jurica appeared to be “secluded” from the rest of the company. This was emphasized by his deep orange shirt, which contrasted with the group’s color scheme. At moments, the rest of the company seemed to exist in Jurica’s imagination. I wondered if he was in some way influencing, or being influenced by, the actions of the group. Jurica performed a captivating solo with an impeccable balance of strength, stealth, and fluidity. Throughout the piece, the dancers’ arms gathered, wrapped, and propelled through space as if something was being conjured. I was reminded of water bending. Even the ease with which the formations shifted around the stage mimicked the flow and current of running water. The piece concluded with the dancers running back and forth in a diagonal pathway on stage that resembled a pendulum swinging from one side to another in an even state of balance and flow. 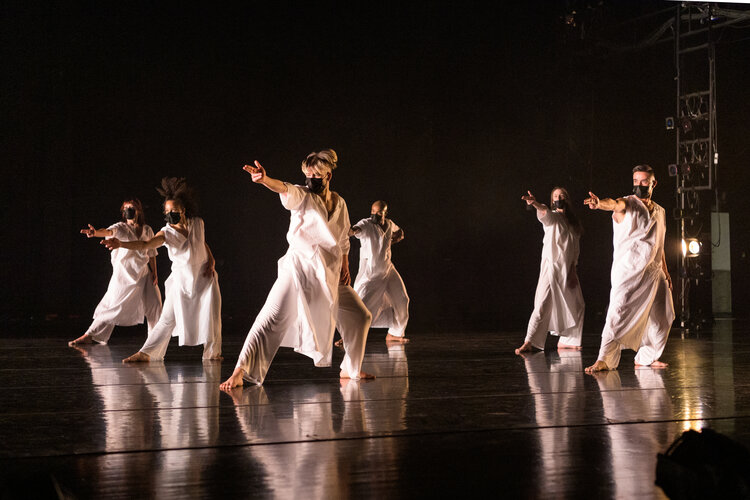 The company in “Rites”

“Rites” was a beautifully chilling work created by Charles O. Anderson. I have been lucky enough to experience Anderson’s artistic and academic virtuosity a number of times as a student in the University of Utah’s School of Dance. Anderson’s work is provocative and moving in its call for action and solidarity in the face of the social injustices faced by Black and other marginalized communities in the United States. “Rites” is a timely piece, but in light of America’s long history of social injustices, I can’t think of a time when this piece wouldn’t have been timely and necessary. Anderson described the work as “a ritual to contextualize the pain of marginalization.” The piece begins with Williams walking downstage illuminated by white light and dressed in a white cloak of sorts. He looks angelic. As the rest of the company enters, wearing similar white garments, the group forms a triangular formation traveling downstage, led by Williams at the tip. The company claps and stomps in a rhythmic manner moving slowly forward with a sense of unrelenting will. The piece progresses as a series of vignettes, each seeming to offer homage to a piece of African diasporic culture. The sound score, designed by Anderson, exhibited the expansive influence of African culture in music. Inlaid in the choreography was Anderson’s Afro-contemporary style, a fusion of classical modern dance and African dance techniques. The entire piece was like a ritual, performed to mourn, to heal, to celebrate community and to invoke change.

The final dance was “I Can See Myself,” choreographed by Andrea Miller in 2010 and restaged for Ririe-Woodbury’s Cadence. The high level of artistry, physical strength and electric performances exhibited by the company were particularly impressive. Miller’s background in the Gaga technique was traceable as the piece demonstrated the dancers’ tremendous strength, agility, musicality, and prowess as improvisers. Miller’s choreography was idiosyncratic in the way it took life within each of the dancers’ bodies. There were solos, trios, and ensemble phrases, sometimes unfolding simultaneously on stage, creating intricate layers and dimensions that were amplified by the cinematic experience of the show.

The tone of the piece was set by the energizing electronica funk sound of the Israeli band Balkan Beat Box. The piece began abruptly as each dancer filed on stage one by one in a line as if they were on a conveyor belt. The dancers pulsed with frenzied shakes in place for a few moments before flinging themselves to the next position in line as another dancer joined from the wings. This continued until the entire company was on stage as if they were characters being introduced before the start of an old television program. Williams, Rivera and Jurica wore an array of shining colored pants with white collared shirts. Greene, Lohner and McCarthy wore an assortment of dazzling sequined outfits, my personal favorite was Greene’s rainbow tutu and shimmering top.

The dancers each personified larger-than-life characters that appeared capable of jumping right out of the screen. Even the dancers’ shadows projected onto the stage’s white backdrop were a part of the piece, making it feel as though there were more than just six performers. The dancers’ engagement with the audience/camera was mesmerizing. Their expressions and feelings were intensely raw and deeply resonant. I felt as though I was personally introduced to each company member’s unique persona. The whimsical and imaginative aura of the entire piece made it feel as if I had been transported into a fantastical alternate reality. This dynamic and lighthearted energy felt relevant in light of the past year’s events and this unique moment of collective unease. 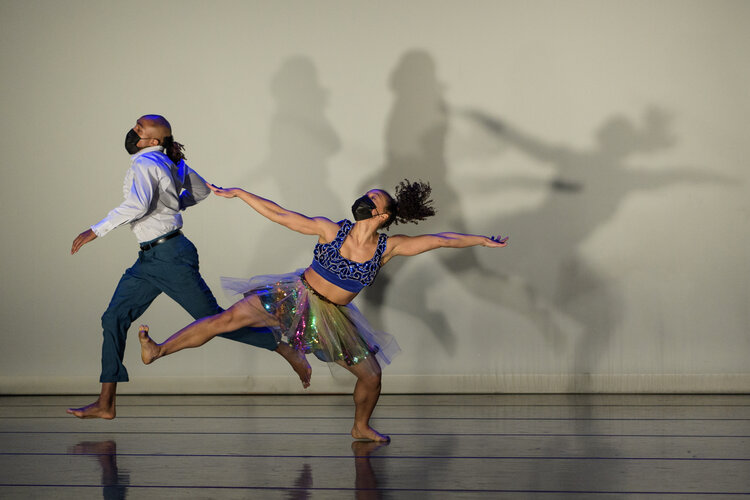 Williams and Greene in “I Can See Myself”