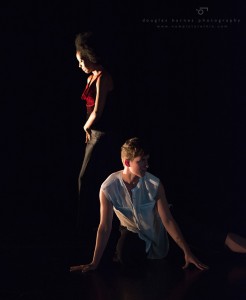 Local choreographer and Pilates instructor Courtney Norris has compiled a selection of reminiscences and whimsy for her current Artist-in-Residence program at Sugar Space. The show opened with “Tis a Gift,” a duet created and performed by Norris and Erica Womack. Norris and Womack were lit softly, as if at dusk, their shadows dancing on the wall behind them. They took turns supporting each other, tenderly and deliberately. The two swayed side by side, breathed together, dipped and lifted each other, and occasionally took a pause to place an arm carefully around the other’s shoulder. Norris and Womack maintained a similar relationship in Womack’s “Dear Son.” In a series of gestures taking place around the abdomen, the two moved together with the mutual understanding of two maternal beings. It is comforting to watch and they seem comfortable in their roles as matriarchs in both dances.

“Fulcrum“ was a joint venture between Norris and local Bharatanatyam performer Srilatha Singh (of Chitrakaavya Dance). Norris and Singh took turns manipulating each other, moving each other’s arms, bending forward and side-to-side. The general feeling was exploratory, as they tested the waters of what each other could and would do. Singh’s hands and eyes began to come alive, in the riveting way singular to performers of Bharatanatyam. Their movements became more independent and branched into unison. Singh knelt in order to view Norris performing a solo, watching as a teacher gazes upon her pupil. Then, Singh began a solo of her own after Norris had ended her’s prostrate on the floor. Singh’s captivating hand gestures (or mudras), were punctuated with stomps and a gaze that told a story on its own. Norris and Singh walked side by side toward the lit candle upstage, as their exchange of knowledge came to conclusion.

Amy Freitas entranced the audience in Awakening Orbit, a solo co-choreographed with Norris and accompanied by percussionist Wachira Waigwa-Stone. Freitas’ arms breathed and grew like hungry vines as her knees propelled a giant silver orb across the stage. Freitas would reach to the highest imaginable place, only to collapse on the resilient orb in a reverberation of bounces, sometimes even diving forward onto it when the orb seemed just out of reach or still in motion. Always playful and radiating joy for the task at hand, Freitas demonstrated a beautiful understanding of her own being of which the galactic silver orb was an extension.

Courtney Norris has woven threads throughout a varied show– of motherhood, of remembering, of teaching, of learning, of exploring, of playing. To see this Artist-in-Residence program, visit Sugar Space Studio for the Arts (616 Wilmington Ave) September 12th and 13th at 7:30 pm.

Amy Falls recently became the Mudson coordinator for loveDANCEmore. She has worked administratively for the arts here in the West and in New York City. She hold a BFA in Modern Dance from the University of Utah.