Remington and Weasel: Freedom’s Just Another Word for Genderless in Pygmalion’s Latest 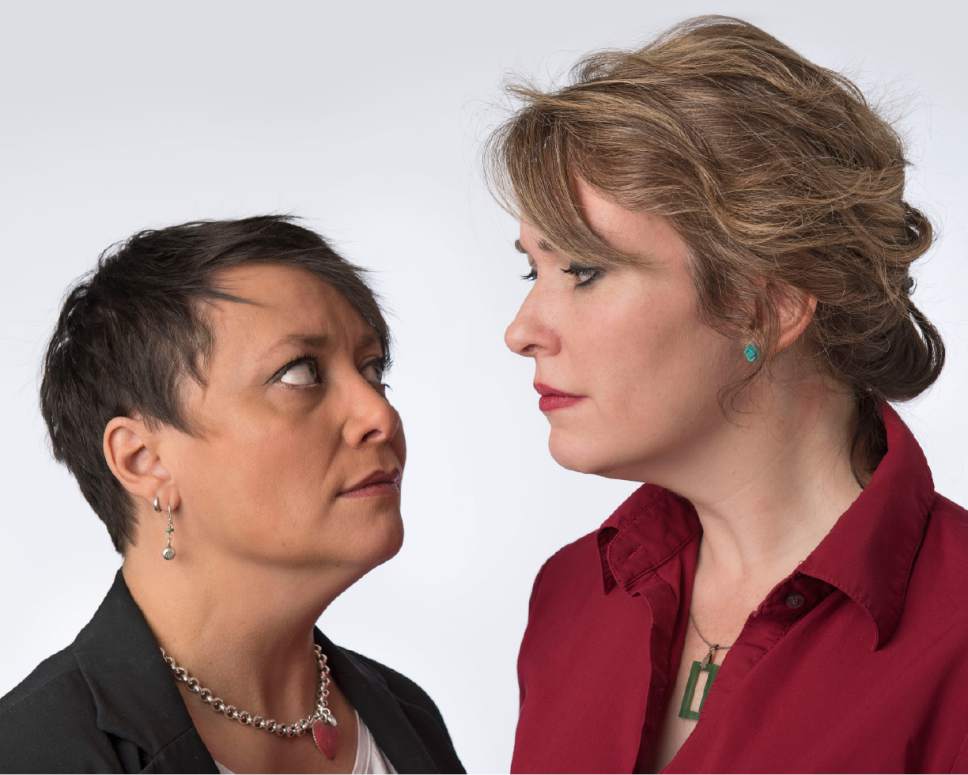 In his latest work, Remington and Weasel, Utah playwright L.L. West gives a knowing nod to the freedom and consequences that come with throwing out the play book to live life on one’s own terms. Appropriately set in the rigid confines of academia, the story follows film Professor Chris Remington (Tamara Johnson Howell) and her colleague Alex Weedle (Alexandra Harbold) through the painful, and sometimes hilarious, journey of what happens when a person goes too far in either direction.

Chris teaches her introductory film class with swagger and a devil-may-care attitude. On the first day of the course, she has no syllabus because her boss snatched it off the printer and confiscated the document. After all, it contained “potentially offensive language.” Chris still gets the class started with plenty of sass, and in a pitch-perfect set put together by John Cook and Nicholas Red, looks completely in her element among the scattered chairs, eclectic props, and racks of costumes that “decorate” any woefully underfunded theater program. It’s here that Chris gives a number of hilarious and off-color lectures, like one in which she explains to the students about the wonders of film and muses, “hopefully something flutters your undies.” She is loud, risqué, and teaching entirely without a filter.

Alex has been sent to report on Chris’ conduct in the classroom, where she studiously takes notes on every session and then critiques the teacher’s missteps. In sharp contrast to the laid-back adjunct professor, dressed in slouchy jeans, Star Wars T-shirts, and mauve loafers, Alex appears to have written the book on how to color inside the lines: she dresses professionally, in monotone garb with only vibrant red lipstick hinting that she’s got some spunk.

Her notes on Chris are made with genuine concern for helping her brilliant, almost-more-than-a-friend to rein things in a little bit. She doesn’t always succeed, and one particular lesson picks up momentum on social media, which brings a sudden flurry of negative publicity to the school, forcing both teachers to confront their long-held opinions on how to approach rules of the classroom and the laws of attraction.

As opposites, the sparks fly between Chris and Alex. Even though Alex is in a relationship with her boss, she can’t help but cast appreciative, lingering looks in the direction of Chris, and the moments when they find common ground are particularly beautiful. About halfway through the play, Alex exuberantly explains a lesson plan that will involve filming the students to show them how their work translates on camera. For a moment, Alex loses herself in the excitement and her usual poise is replaced with an uninhibited joy for teaching; and Chris listens with genuine admiration. Their attraction and desire is palpable during heated arguments, but it really ignites when each character moves a little closer to understanding the other: Alex wanders outside the lines, and Chris is drawn in by her.

An added layer in their potential love story, which is never overtly addressed, is a not-so-subtle wink and a nudge from the playwright: the title characters are both women, but any gender could play either role and the story would still be seamless. It’s a well-done commentary on just how little gender matters in a romance because love and attraction don’t operate within boundaries. If they did, nobody would ever fall in love with the wrong person; employees wouldn’t be attracted to their bosses (HR can dictate whether or not people in those roles can date, but can’t control the attraction itself); and nobody would get swept up in the wonderful, unpredictable nature of love.

West’s play, directed by Robin Wilks-Dunn, has moments that are hilarious and others that are heartbreaking, but the moral of the story is ultimately about navigating the rules we encounter in everyday life. It’s not necessarily wrong to throw caution to the wind, but to always live that way can have disastrous consequences. The opposite is also true. Without trying to break the mold, we run the risk of living life in a beige box with no understanding of our own potential. It’s best to find those moments of balance – where Chris and Alex are at their best.