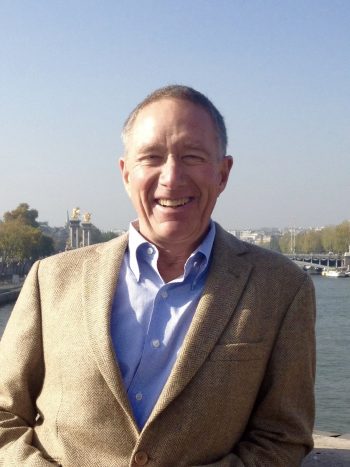 A quiet man with a sincere smile and a great handshake, Sam Stewart was a wizard financier, admittedly “hooked” on stocks but unattached to money itself. Instead, he gloried in what he could make money do for nonprofit organizations, to aid museums and change the lives of artists, to further dance companies, assist the symphony and opera, to make money work to advance equality, human rights and medical research.

Alongside Salt Lake City gallerist Diane Stewart, his beloved wife and partner of nearly 30 years, he served our community on a deep cultural level, and the generous gifts of the Stewart Family Foundation will continue to enrich and enliven minds and spirits for generations.

Gretchen Dietrich, executive director of the Utah Museum of Fine Arts recalls, “Sam was always so kind and so supportive of what we were doing at the UMFA. He always had a smile, a twinkle in his eye, and a kind word for me. In his own quiet way, he loved art and loved the UMFA and I think took great pleasure in knowing he was helping us to do the good work we do,” Dietrich says.

Samuel Spencer Stewart Jr., 79, died at his desk (despite his wife’s frequent urging to slow down) on the morning of Nov. 23, 2021, in Salt Lake City. The home was filled with a large, rowdy, and loving family: Sam had had five children with Pamela Kimball, whom he married in 1970; they were divorced in 1991, according to The Salt Lake Tribune. When he married Diane Pew (Stewart) in 1992, she brought two of her own children to the tribe, and as a couple they added two more, for a total of nine. Eleven grandchildren and numerous pets contributed to the lively confusion of the combined Stewart clan.

Born July 3, 1942, in Salt Lake City to Miriam Hardy and Samuel Spencer Stewart, Sam grew up the eldest of four boys, including the now-deceased JB and Jim, and John Stewart, who survives him.  During the past 20 years, Sam and Diane have worked together to restore the Stewart family ranch in Mount Pleasant, Sanpete County, where Sam spent much of his childhood, to full working order, including raising the calves Sam so loved to visit first thing upon arrival. This restoration has included adding a notable collection of artworks in the main house, cabins and about the serene grounds.

Sam Stewart attended a variety of Utah schools: Douglas Elementary, Roosevelt Junior High, and East High School. As an Austin Scholar he received a Bachelor of Science in Business Administration from Northwestern University, served in the Central British Mission in England and Wales, then earned a combined MBA and Ph.D. in Finance through the Sloan Program at Stanford University.

He was a professor of finance at Columbia University and a Financial Analyst at the SEC, then returned to Utah to become a finance professor at the University of Utah until 2000. In 1975, he started Wasatch Advisors and built his company into a brand that gained national recognition for Salt Lake City in the investment community. After 43 years there, he left to found Seven Canyons Advisors with two of his sons and a son-in-law. Stewart has been widely interviewed about his unique investment style in prestigious publications such as The Wall Street Journal. 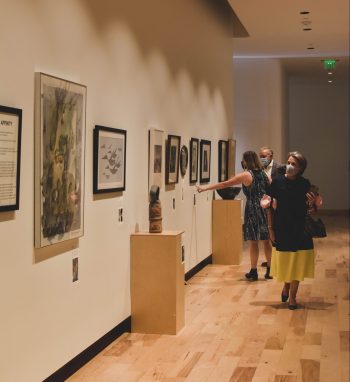 Sam and Diane Stewart visiting the Southern Utah Museum of Art in Fall, 2020.

Successful work in finance enabled Sam and Diane a thriving life supporting the arts and those who create it. One beneficiary has been Ririe-Woodbury Dance Company, and co-founder Joan Woodbury says brightly, “I adored that man! He was charming and smart … and he understood dance. He loved the arts and was supportive, welcoming, and intelligent. A gracious gentleman. You felt very special around him. You were the most important thing in his life at that moment,” Woodbury observes.(This writer must confess to having been on the receiving end of one of Sam’s handshakes. And to promptly falling in love.)

Other members of the Utah arts community feel as warmly about Sam Stewart. “The arts community has lost a great advocate,” remarks Jessica Kinsey, executive director, Southern Utah Museum of Art, Cedar City. Kinsey remembers that when Stewart attended the opening of Right Here Right Now, (an exhibition at SUMA in Fall, 2020, marking the 150th anniversary of women’s suffrage in Utah and the 100th anniversary of the passage of the 19th Amendment to the U.S. Constitution) he took an interest in a small, adjacent exhibition titled Affinity. Curated by an undergraduate student, Emily Moyle, the exhibit was inspired by Right Here Right Now and featured the work of female artists in SUMA’s permanent collection. “Sam was impressed with the fact that SUMA was showing work from its permanent collection and connecting it to the contemporary themes and work in Right Here Right Now. He was so excited by that idea and encouraged us to do that more, which we have made a priority!” the museum director recalls. 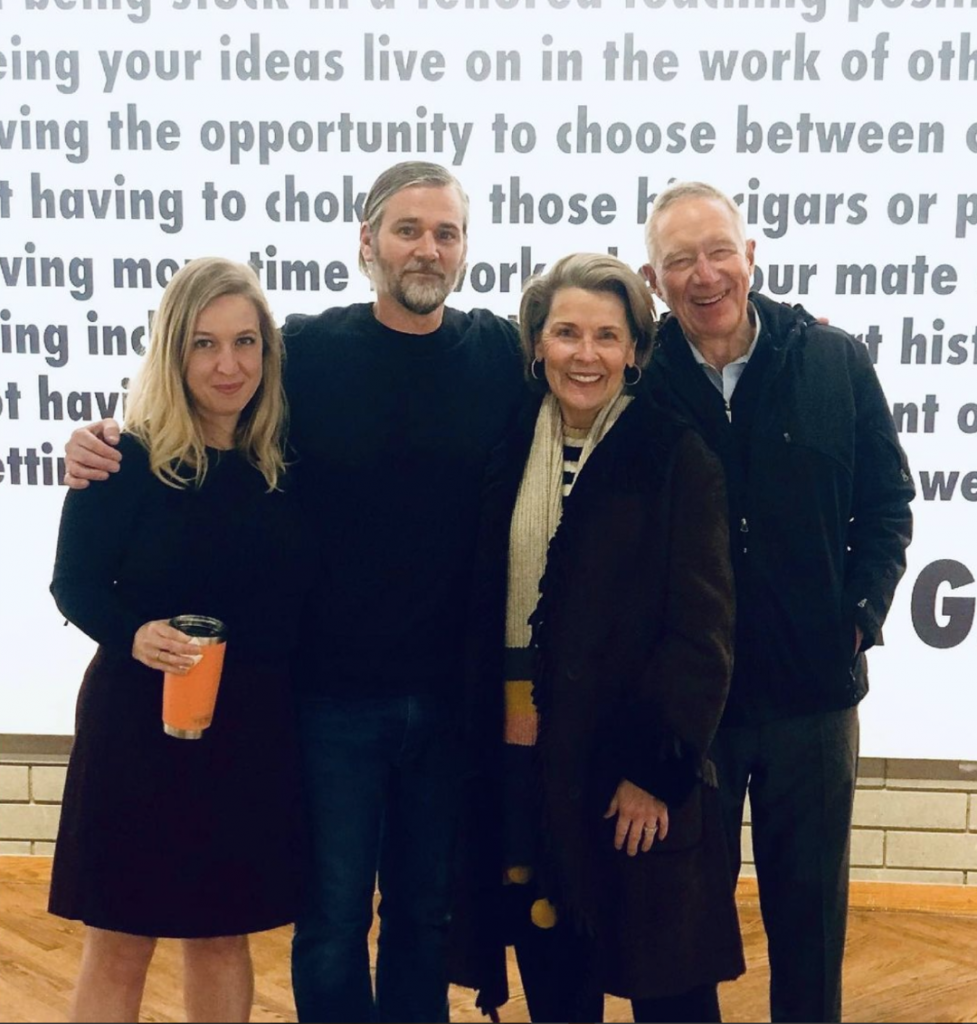 In February 2020, Sam Stewart and Diane Stewart were named Patron and Matron Saints of UMOCA at the opening of @guerrillagirls for their continued support in propelling the museum forward in innumerable ways. (from left: UMOCA director Laura Hurtado, curator Jared Steffensen, Diane Stewart and Sam Stewart

Laura Allred Hurtado, executive director of the Utah Museum of Contemporary Art in downtown Salt Lake City, came to know the Stewarts first personally, and then, as she established her career, professionally.  “Sam was a thoughtful, understated, and kind person, deeply invested in his family, his community, his faith, and was a champion of many,” Hurtado says. The Stewarts have been generous donors of UMOCA, but Hurtado remembers one contribution in particular. The foundation had already made a generous donation to UMOCA when Sam and Diane came to an event at the museum.  “That night, he decided to double the foundation’s impact and give more. It was so unexpected, and I was blown away at the generosity and tremendously, nearly speechlessly grateful. … [I]t has been a powerful thing to have someone of his stature, influence, and abilities truly invest not only their resources, but their belief in me and in the work we do. When talking about companies he invested in throughout his career, he said he was a ‘people collector.’ And I feel so honored and humbled to have been part of that collection.”

Shalee Cooper, gallery director at Modern West Fine Art in Salt Lake City, witnessed the amassing of the Stewart art collection and saw it develop during the past six or more years. She imagines that Sam’s involvement, to a large extent, “reflected Diane’s love and support of the arts. Her passion is contagious. Diane started Modern West in support of artists she and Sam were already collecting. Her goal was to support established and emerging artists and to focus on inclusivity — Sam shared in Diane’s appreciation for how the arts impact community and have a trickling effect on development and growth,” says Cooper.

From what were more traditional works in their early collection, Cooper observes, “their style and focus grew into collecting works that were more contemporary and based on works that held a personal narrative. Their focus began to move toward collecting pieces they really loved and to support artists and works that they really believed in.”

Sam’s favorite artists, according to his wife, were Andrew Alba, Billy Schenck, Rebecca Campbell, and Eric Overton. “Our journey with supporting the arts began with our collecting,” Diane Stewart recalls in a note to 15 Bytes.  “Sam most loved meeting the artists.  He loved the aesthetic of both [Modern West] galleries… and just appreciated all that I (we) created,” she writes.

Cooper points out that, “Sam’s greatest passion was Diane … Their languages were different, but they shared a similar voice and a distinct mission.”

The gallery director relates a delightful story: For Valentine’s Day – in fact, for the entire month of February this year – a billboard commissioned by Sam from ESPO (New York City artist Stephen Powers) was installed right off 600 South. Adorned with Valentine’s-appropriate hearts and flowers, it was a portrait of Diane accompanied by the words “Your Ever After Is All I Am After.”

“Sam’s tastes in art were always evolving but I am sure I would be right in saying this billboard would have been his favorite work of art — not only because he commissioned it but because it was of Diane,” Cooper asserts. “This love letter was for his love, Diane, with a meaning for all acknowledging that the power of art is a common language and brings community together.”

Sam Stewart was a wizard in the world of finance who, encouraged by his partner Diane, used his gifts to aid institutions concerned with the arts and humanities, along the way becoming a knowing, feeling supporter of a variety of the arts in Utah, and of those individuals who make its magic for the rest of us.

We thank Diane for sharing him. 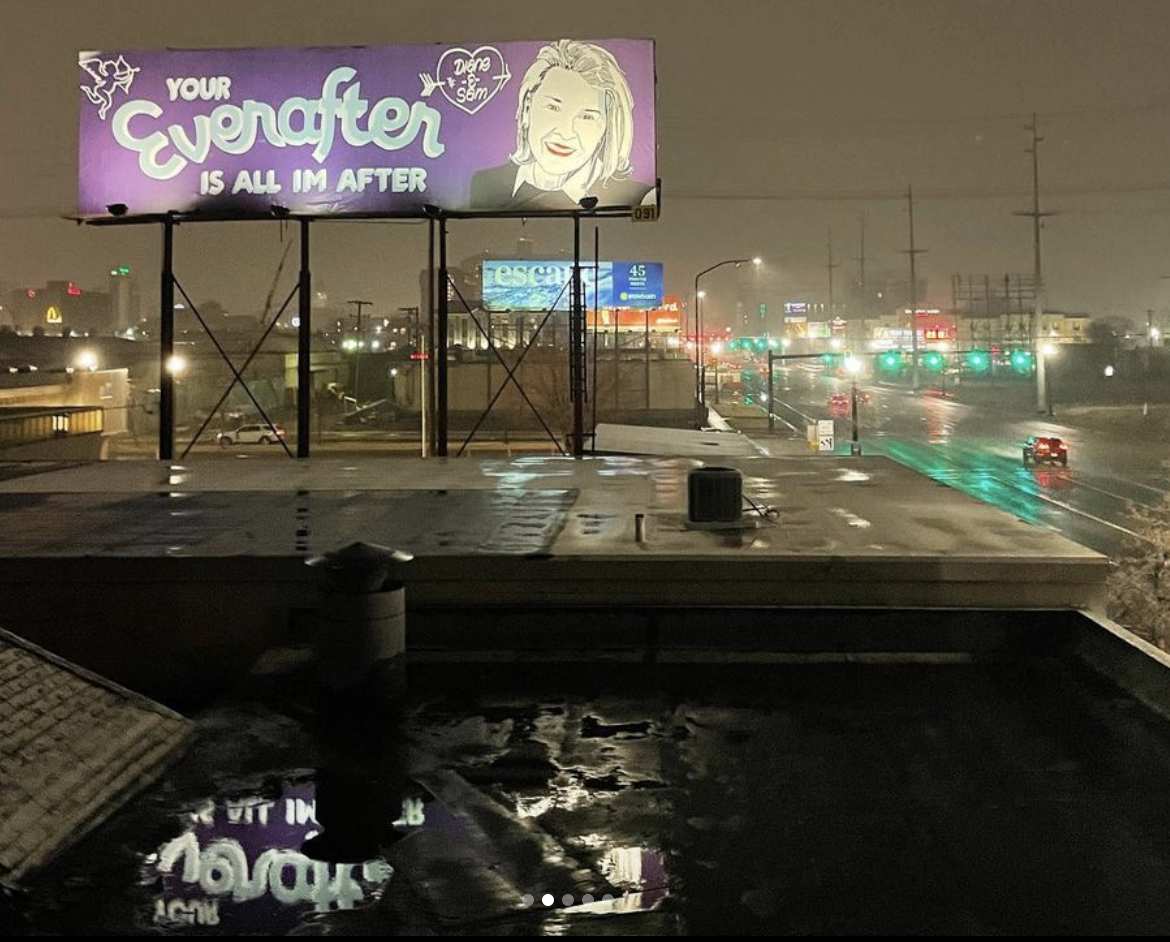 The Stewart family suggests donations to No Poor Among Us (npau.org), that supports education for disadvantaged women in Africa.