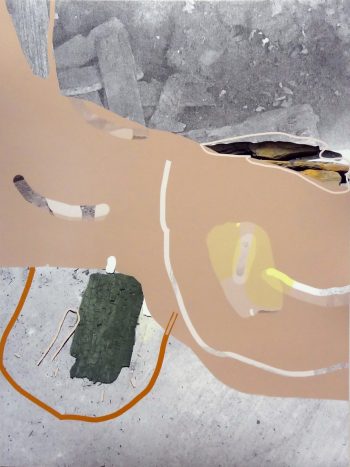 Sarah Bown Roberts recently graduated from BYU, but she’s starting out strong with Head Lands. Like Noah’s Ark, her 10 mixed-media collages, three oil paintings, and six digital photos each carry paired aesthetic animals. Thematically, the first pair divides them into “archeological excavations” and “restorations.” In this, they recall Sir Arthur Evans work at Knossos, on the Isle of Crete, at the very outset of the 20th century. Evans version of Knossos, so imaginative and fanciful that it’s impossible to know what he found and what he invented, was complicated when the Minoan palace, which had been destroyed millennia before by earthquakes and rebuilt by him according to his own vision, was damaged again by yet another earthquake. But Evans was supposed to be an academic, while Roberts is an artist, and while he misled scholars about the culture he excavated, she seeks to illuminate some of the ways people are constructed, damaged, and investigated by others, and then reconstruct themselves.

Technically there is a pair of primary approaches here, as well. The majority of the works are inventive combinations of commonplace materials she has chosen with remarkable freedom, to which she’s added a trio of more conventional paintings. Then there are half a dozen photo collages that quickly make an older viewer feel how rapidly he is slipping into the past. Of these, more in a moment.

The titles of the mixed-media collages tell how she wants them viewed. “Excavation” means something is being revealed, exposed, discovered, while “Fixed” may employ fabric, gauze, glue, string, or a variety of types of tape to put parts together. Or, significantly, to cover back up what has been taken apart or torn asunder. Some of Robert’s best effects here are due to the relief produced by layering, as when in “Excavation 1” she cuts one layer around another, then layers another piece across a nearby boundary, implying that while some parts have been dug up, others are still what the archaeologists call “in situ.” It comes as no surprise that excavation isn’t always distinct from fixing, as the two processes are virtually opposite sides of the same coin.

It may not be going too far out on a limb to guess that in the photo collages, Roberts makes use of what Photoshop calls the “Flatten Layers” function. Here she’s probably done a lot more of what went into the mixed-media work, but done it either in her head, her computer, or both. Even though only a single medium—digital imagery—is present here, the sources of those images are just as various and distinct as are the materials she’s collaged in her other works, and may even have taken longer to collect.

Roberts has none of the artist-innovator’s traditional reticence about keeping the secrets of her art under wraps, and a title like “Collapse IV,” while not completely alien to “excavation” and “fixed,” is just as likely to be her candid admission of how it’s done. But regardless how she achieves it, her real accomplishment is to bring together actual photographs and digital representations in ways that confuse, and almost eliminate, the difference. The camera flattens that which the mind knows from experience has depth, while the digital image tricks it into seeing something that has always been flat as similarly three-dimensional. The resulting texture is something the mind alternately fights against and swoons over. 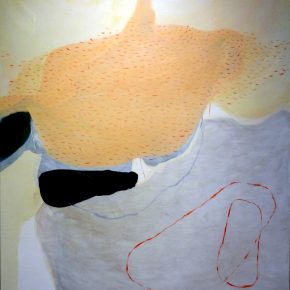 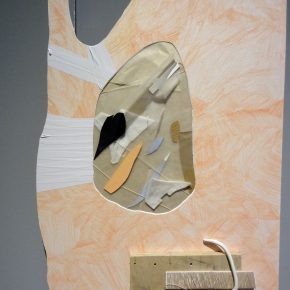 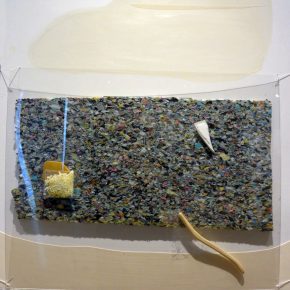 In spite of its accessibility, collage isn’t really a populist medium. Picasso and Braque used collaged elements to make cubism more approachable and some kind of fun, and Max Ernst showed how collaging narrative images could make the most harrowing, unbelievable things look possible. Most of the time, though, collage equals abstraction, with all the challenges that go with the territory. So far as textural associations and compositional relationships within the frame can carry the viewer, all is good. The aesthetics are here. Then Sarah Bown Roberts does what abstraction must additionally do for those seeking more visual content, which is to show, as in a mirror, adequately autobiographical impressions to allow the viewer to recognize not what has been seen before, but what is felt and what, having been felt, remains in memory.