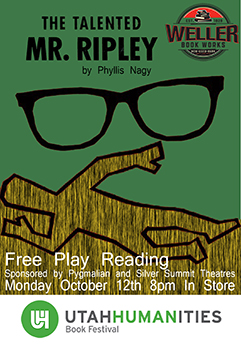 In scene #1, a cautious young man notices a suspicious, older man following him around a rough neighborhood, so he enters a rare public space, a bar, to await what follows. The older man not only follows him in, but sits and begins a conversation. He is Herbert Greenleaf, who is seeking someone to track down his son, Dickie, who has abandoned his responsibilities to his family in favor of an artistic life in Italy.

In scene #2, Herbert Greenleaf, a wealthy shipping magnate, spots a young man playing piano at a college recital. Observing the Princeton jacket, he thinks the pianist might know his errant son, Dickie, who went on a vacation to Italy and chose not to return. Greenleaf offers to pay his son’s presumed friend’s passage to Italy to convince Dickie to come home. After the two men part, the young man returns the borrowed jacket to its owner, revealing that he has no connection to Princeton, nor presumably to Dickie Greenleaf.

In scene #3, a lone young man describes a dreamlike scene full of ominous Freudian symbolism. Then he meets another man, to whom he introduces himself as an IRS investigator. Although this second man is suspicious of his eccentric manner and lack of office, the phony agent persuades him to write a check to cover alleged back taxes. Fresh from this extortion, he meets the Greenleafs and convinces them with an elaborate story, not only that he knew their son well, but that they are obliged to him for a previous favor.

Each of the above is the opening scene of a version of Patricia Highsmith’s seminal novel, The Talented Mr. Ripley. Each is presented in a different medium, and each reveals some of the demands and opportunities of, respectively, the original 1955 text, the 1999 film by Anthony Mingella, and the 2010 stage version adapted by rising British dramatist Phyllis Nagy. To take just a few examples, the novel takes advantage of narrative voice not only to create exterior atmosphere, but to suggest the protagonist’s mental state without resort to an intrusive voiceover. Mingella considered music an essential part of his films, which in this case gives him a mechanism for the instantaneous bonding between Tom and Dickie that must follow. And on stage, witnessing Ripley in action before he meets the Greenleafs lets the audience view his behavior more accurately from the start.

The Talented Mr. Ripley is important for at least three reasons. As a novel, it stands in a line that leads from such early existential classics as Dostoevsky’s The Underground Man to the modern glut of anti-heroes. Tom Ripley, an ambivalent, pragmatic, social Darwinian whose multifaceted personality stretches to accommodate all three of the cited introductions, confronted readers with a criminal who is amoral rather than immoral. That is, rather than being motivated to steal or kill for an ulterior purpose, he commits the crimes that happenstance puts in his path, or circumstances require of him. Second, it was followed by four more novels that trace the career of Tom Ripley from youth to maturity, allowing readers tantalized by this mysterious character to watch his personality grow. And third, when she wrote them, less public attention was generally given to an author’s private identity, but recent revelations about Highsmith’s complex sexuality have made new readings of her often dark adventures available to new audiences.

For her part, playwright Phyllis Nagy plays a leading role in the revival and re-evaluation of Patricia Highsmith. At about the time her stage version of Ripley opened in London, she was at work on a screenplay based on another Highsmith novel, The Price of Salt, which takes an unusually positive view of a love affair between two women: an attractive and successful older woman and a younger department-store clerk. Carol, as the play was called, proved too hard to stage in 2010, when serious, female-driven films, let alone ones about lesbians, weren’t being produced. Fifteen years later, that has changed, and Carol is about to be released as the art house counterweight to the new “Star Wars” blockbuster.

The novel and (actually, several) films of The Talented Mr. Ripley are readily available in Salt Lake City, but until this week the play has not been. A first step in rectifying that omission was made on Monday night, when Weller Bookworks, as part of both its Free Play Reading Series and the Utah Humanities Book Festival, staged a free reading in the bookstore. Although presented without costumes or scenery and only minimal action, the actors prepared as they would for any staging, rehearsing and working together to develop characters and impart the right voices. So, with Nagy’s long-frustrated Patricia Highsmith film project about to receive a very public debut, it seems fair to say that her staged version should be seen more widely. Presumably Pygmalion Productions and Silver Summit Theatre Company, co-sponsors of the reading, would agree.