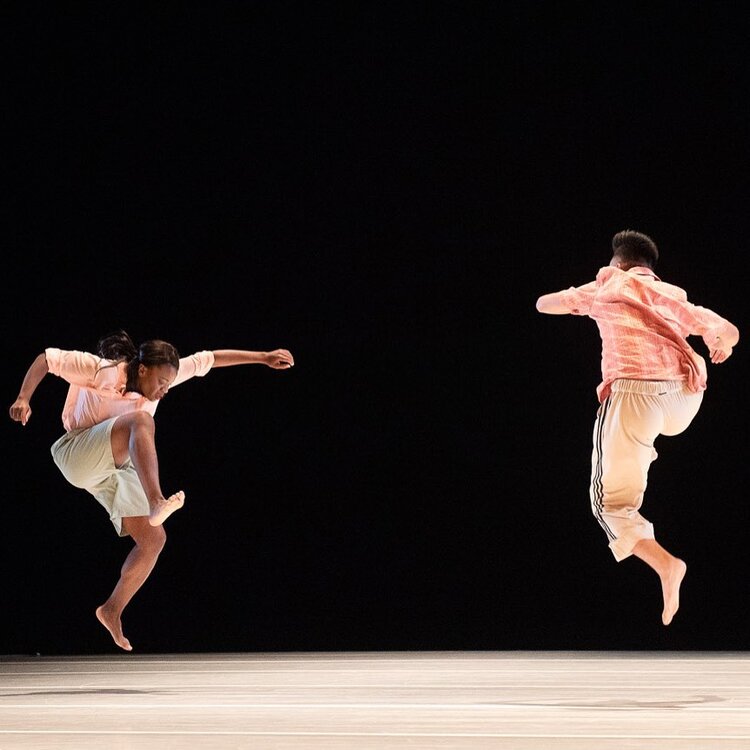 Ursula Perry and Daniel Do of Repertory Dance Theatre in Noa Zuk and Ohad Fishof’s “Outdoors.” Photo by Sharon Kain.

Selections by Doris Humphrey, Lar Lubovitch, Andy Noble, and Noa Zuk and Ohad Fishof made up the beautifully danced and masterfully compiled lineup in Repertory Dance Theatre’s Inside/Outside program. Four unique islands in RDT’s vast repertoire, these dances exemplify differing eras, goals, methods, and legacies from the wide, rolling tradition of modern dance – here, brilliantly scaffolded and extensively annotated to frame and signal the coordinates of and between each.

Doris Humphrey’s choreography for the 1949 trio “Invention” calibrates a viewer’s entry at the foundational classics of modern dance. Draped in spare bright light and colors, it is a beautiful illustration of Humphrey’s style and the abiding notions and queries of early modern pioneers. The pulsing, bouncing act of losing and recovering balance out of gravity, finding symmetry between two halves with long directional lines forming and breaking and reforming, sculptural images, and the direction, shape, and space occupied by interacting bodies all act as metaphors for abstracted floating narratives of interpersonal drama.

Following “Invention” was Lar Lubovitch’s “Something About Night.” Although Lubovitch created the piece just shy of seventy years after “Invention,” the pairing of the two allowed a line to dot along from one to the other, daylighting a common river underneath. Both pieces breathe steadily with variations on the same bounding rise and fall, accruing strength and sculpting imagery through sustained, cycling evolution. In a taped interview which preceded “Something About Night,” Lubovitch explained his desire to use movement as a kind of painting: to evince a world or a mood, to hint toward embedded characters and relationships — familiar territory. “Something about Night” premiered in 2018 at the choreographer’s fiftieth-anniversary concert, its movement phrases drawn from previous works. Through transposing tableaux and choral voices, Lubovitch makes offerings to ideals of beauty, quiet, and memory.

Characterized by all-time ultramodern favorites — chaotic, large groups and gliding, slinking, shifting, shaking, guttural sneak-surprises, with a side of abstracted social dance and pedestrian gesture — the two post-intermission works stood in contrast to the controlled and bobbing poise of those by Humphrey and Lubovitch. Andy Noble, formerly of RDT, plumbed the depths of humans’ relationship to technology with jumping jacks in his “Filament;” closing out the program — and adhering to the cardinal rule of every mixed rep in the latter half of the twenty-teens that requires, at minimum, one Gaga-informed work — was “Outdoors,” the arresting first half of a larger piece called “Shutdown” by Batsheva Dance Company alumni Noa Zuk and Ohad Fishof.

I wasn’t expecting to enjoy Noble’s piece as much as I did. “Our relationship to technology” is an interesting subject, but in dance, one that is frequently accompanied by an eye-roll-inducing lack of nuanced probing and the tendency to use projection technology to throw gimmicks or larger-scale movement up on a scrim behind the dancers, effectively minimizing what should be the most powerful and urgent element: the live performance.

Happily, Noble averted these pitfalls for the most part. Repetitive mechanical phrasing that devolved into something, a large projected grid that effectively utilized the shape of the entire proscenium stage, and distorted projections of the dancers blipping across several large standing panels which the dancers could actually interact with all helped to integrate the technology with the performance itself.

The concept of “Outdoors,” by Noa Zuk in collaboration with Ohad Fishof, is simple: one 15-second rhythmic phrase repeated over and over and reformulated to fit any and every variation thinkable. Program notes indicated that the phrase is repeated around sixty times over the length of the piece. In practice, the effect was both stupendous and cleverly subtle and the dancers performed with exceptional power, the movement sitting in their bodies with an easy exuberance and fury.

RDT is deserving of commendation for its efforts to make modern dance conceptually accessible to all. The inclusion of written and digital materials (available before, during, and after the program across multiple platforms) to introduce, explain, and contextualize every interlocking piece  was audibly appreciated: I heard a young tween behind me exclaim to her friend, “I could see it, I could actually see it, what he said in the video,” as they breathlessly dissected a piece during a pause. I would guess that a good fifty percent of the audience the night I attended were of high school age or younger, and they were all on the edge of their seats.

It’s no insignificant choice to invest in sharing art this way. Spending the time and resources to produce extra materials and facilitate a structure that integrates them fully during every program shows a commitment by the company to their audience — and, one of the best that RDT can make as a company dedicated to carrying the legacy of modern dance into the future.