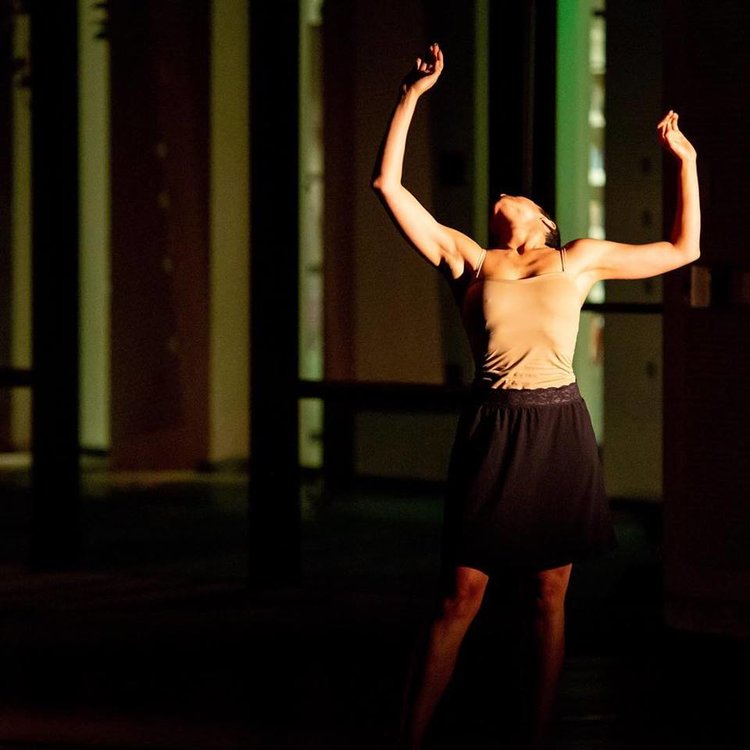 Agami is also the founder and artistic/executive director of Los Angeles-based dance company Ate9, in addition to being a renowned choreographer, a Batsheva Dance Company alumna, a Gaga movement research instructor, and a masterful, incredibly expressive dancer. Each of these many roles informed Agami’s powerfully realized and embodied solo “Framed,” presented by Repertory Dance Theatre in the intimate black box theater at the Rose Wagner.

Agami is in town to restage “Theatre” for RDT, a piece first set on the company in 2016. She is known primarily for creating innovative works and collaborations that utilize the specific strengths of the dancers of Ate9; having her in Salt Lake as the repetiteur of her own choreography and the presenter of a career-first solo is a privileged look into the wider scope of her artistry.

First, a hand and an arm, then a foot. Slowly, all of Danielle Agami emerged from the stage-left drapes in silence. She moved laterally across the floor, her image hazily reflected there by the effective low lighting designed by Pilar Davis. As the silence continued, the top light was brought up to reveal the shadows of Agami’s gestures on the white floor, over which she crouched and shifted. Her movement was grounded even in its moments of frenetic repetition, such that it never sacrificed clarity for lack of control. A fluid, graceful counterpart revealed her maturity as a dancer, as she reached absolute full extension before returning purposefully inward, her limbs turning in and out completely. An introduction, performed in silence, felt like a private, vulnerable moment we were allowed to access through chance and good grace. Then the music began, with the strings coming in and Agami walking out.

Upon her re-entrance the audience was fixed with the intensity of Agami’s direct gaze for the first time, perhaps realizing how much emotion had been conveyed before without it. She walked briskly down the diagonal, bearing a tray of popcorn and snacks that she proceeded to distribute among us. The host had emerged; we were meant to, and were made to, feel the dynamic shift of being explicitly and literally catered to, along with the complex of gratitude and discomfort that the reception of such performative accommodation may entail. Agami rode out the momentum of the gesture to great comedic effect, immediately escalating its scale with a precarious stack of gift boxes and a mini fridge. She chose not to be subtle in treating the relationship between artistic and material consumption. But malice and resentment were notably absent, as though Agami is personally compelled to be generous — almost as though what we do with her gifts is our own affair. Her last offering was a camera handed to a patron seated front and center, for whom she struck a provocative pose of dramatic curves.

The camera’s flash initiated another tonal shift. Agami established a series of too-familiar “dance” poses, freezing them for the static photographic medium. She then moved through the poses again, frantically articulating and rearticulating the assuming of each before moving on to the next, taking an iterative approach within the sequential progression. Rather than the more familiar repetition of themes varied across movements, Agami’s Gaga-informed repetition was immediate, exhausting one thought to depletion before moving on to the next. Cohesion was not achieved simply by revisiting motifs but rather through creating fully motivated, fully realized ideas. The 40-minute work was a series of these complete vignettes with thoughtful transitions that constructed a singular emotional landscape.

Danielle Agami began to speak directly to us, and the introduction of her voice heightened the experience as much as her gaze had previously. She spoke of dissatisfactions with her body, with aspects of her history and lived experience. Truthfully, had my viewing companion and I not been weeping more or less consistently since the silent exposition, we would have begun to during this brief and uncontrived address. It was pointedly framed as a decision to make disclosures, with the corollary “I wanted you to know that I know…” in the interactive orchestration of give-and-take.

Agami had in fact snatched back several of her props from the audience, a gift box and a can of cola or two, but would proceed to draw many more objects forth. These included a stuffed cat, a punching bag and boxing gloves, club clothes and headphones, a cheese knife, and a cocktail shaker and chocolate syrup. All of these were utilized effectively, but none more so than the “prop” partner planted in the risers, Ate9 company manager Jordan Klitzke. Agami drew him down the stairs from the top row and began to duet with his inert form. It became a partnered piece that somehow encapsulated every rewarding and disappointing aspect of interpersonal action, including violence and intimacy, as well as tension and release, to a degree I had never seen before. In the Q & A following the showing, Agami stated that the two were careful never to over-rehearse the duet, which no doubt contributed to its force.

RDT company member Ursula Perry also lent her voice to the performance, several times selecting fellow audience members to suggest to Agami as potential romantic prospects, enumerating their fabricated or cheekily veridical names and attributes. This was the rare recapitulation of a motif in the piece, and it served as an effective transition between ideas. At each suggestion, Agami would demur with a gesture. Finally, she firmly stated an imperative, “Stop; enough.” This was a definitive end to the bit, and it signaled a return to silence. The piece came to an end with a series of interspersed gestural invitations to leave, which some of the audience haltingly obliged, even as the work continued. The movement became more akin to personal research as the invitations became less obliging. Agami came to rest supine on the floor, before exiting with a nod of acknowledgment.

The Q & A that followed was much like the piece itself: uncompromising honesty in the insights that Agami shared, with the sense that no choice in what was disclosed or withheld was made lightly or unconsidered. It was the last in a series of generous acts.