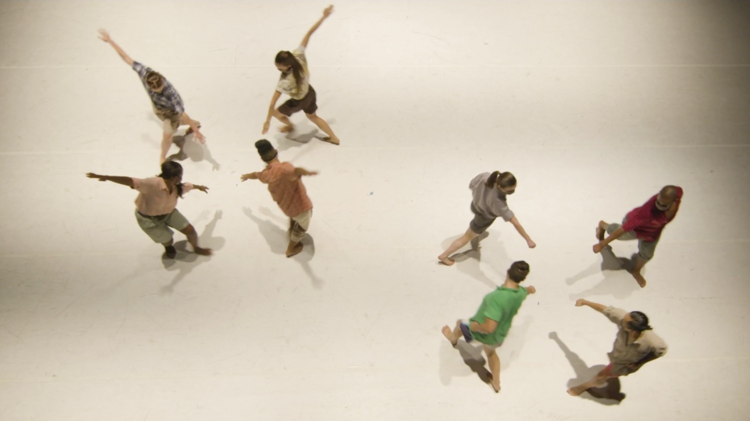 RDT, viewed from above, in Outdoors

The film begins with a recorded Zoom meeting in which RDT’s executive/artistic director Linda C. Smith and RW’s executive director Jena Woodbury welcome us to the performance. They address, with a sense of humor, the fact that people continue to confuse one company for the other even though they’ve been major players in the community for more than fifty years. The statement, “We decided to make a performance together to prove that we’re two different companies” is curiously followed by a list of characteristics they share, which includes their belief in arts education, preservation and performance of historical dance works, commitment to working toward a more equitable world for everyone, and a shared denouncement of racism, bigotry, and intolerance. I want to add that both have employed an equal number of men and women performers for decades, posting auditions notices for “male” and “female” dancers. I wonder who will be the first to denounce these outdated, cisgender hiring practices and welcome non-binary dancers into their corps.

The contemporary program includes (in order): RESET, performed by RDT and choreographed by company alum and Regalia 2020 winner Justin Bass; Autumn Sun performed by RW and choreographed by artistic director Daniel Charon; and Outdoors performed by RDT and choreographed by guest artists Noa Zuk and Ohad Fishof. The commonalities between the three works outweigh their differences, not quite supporting the directors’ intention to prove that the companies are two different entities. RESET and Autumn Sun share similar compositional structures. They both employ fractured entrances and exits — pairs of dancers moving in unison, overlapping and criss-crossing, while maintaining social distance. Both choreographers admitted that this emphasis on duets was a result of the constraints imposed by COVID-19. Questions and comments about how to perform partner work without touching were aplenty in the post-performance Q+A Zoom, with RDT’s artistic associate/development director Nick Cendese sharing that the adjustments made to the third work, Outdoors, challenged the company to redefine what partnering means. 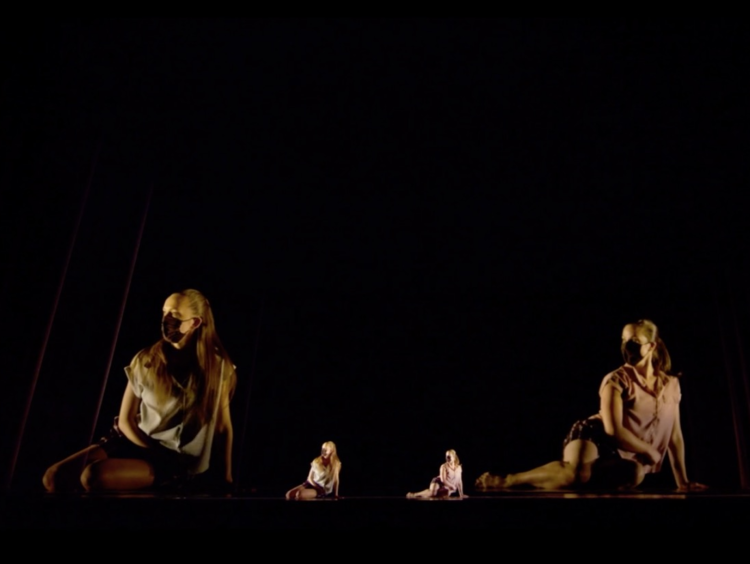 Outdoors and RESET are heavy on the repetition, featuring singular movements/gestures that are repeated successively, as well as longer phrases repeated intermittently throughout the pieces. Many of the movements are quirky and entertaining at first, but eventually become tiresome. Both works are performed to consistent, upbeat rhythms, the movements matching the beat without much contrast to ward off predictability. This is RDT’s second time performing Outdoors. I saw its premiere about a year ago and adored it, so I’m forced to wonder if my shift in opinion is due to my familiarity with it, the energy that’s lost when something is viewed through a screen as opposed to in person, or if the lack of touching between the cast weakened its magic. One of its strongest reconstruction choices is the bird’s-eye-view videography that appears several times in the beginning of the piece. The same point of view also occurs towards the middle of Charon’s work and is a very refreshing perspective.

The highlight of the program is Nicholas Jurica’s virtual presence in Autumn Sun. Forced to remain distanced from the company because his wife tested positive for COVID-19, Jurica pre-recorded his choreography via Skype, then projected onto the scrim. He’s larger than life in comparison to the dancers on stage, and the duet he performs with Dominica Greene is inventive and entrancing.

The virus has made all of us dance makers, performers, and educators ask, “What has to change? What can remain the same? What will we retain when/if this ends?” The first two questions have pretty obvious responses. As for the third, Charon’s flexibility and “make it work” attitude in response to Jurica’s circumstances are things I hope all choreographers adopt as we move through and beyond the pandemic. In addition, I appreciate that the video-on-demand structure allows two viewings per ticket. The performance will be available throughout October.

I look forward to seeing the ways in which both companies push themselves to find new ways of engaging audiences for the remainder of this season, and I’m especially excited to see them integrate their new discoveries into live performance… when we finally get there. 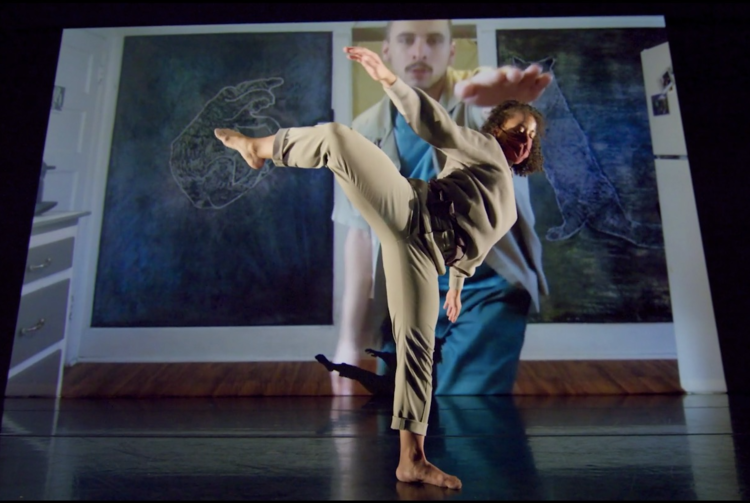 Jurica, larger than life, and Greene in the foreground