This month at Gallery MAR you can view Randall Lake’s “Blue” paintings, a group of work first explored in our profile of the artist in the January edition of 15 Bytes. These deeply personal and stridently polemical paintings reveal a rarely seen aspect of the Utah artist best known for his genteel landscapes and still lifes.

Gallery owner Maren Bargreen decided to exhibit the works after reading about them in 15 Bytes, where Lake described himself emerging out of a difficult personal period by using his paintbrush as a “cudgel.” The new works are angry paintings — filled with skeletons, suicides, references to death camps — that mix the personal and the political. They are shown together with Lake’s smaller works in a traditional vein, the “bread” of the show’s title “Bread and Blue.” Bargreen realized that to exhibit Lake’s new works was to invite controversy but felt compelled to do so. “[Lake’s] story as an artist isn’t complete without the ‘Blue,'” she says.

The “bread” of this show is found in the wings, with Lake’s paintings about war, death and homosexuality taking center stage. The artist’s stylistic approach, where some areas are only roughly blocked in, and figures suggested rather than depicted so that they are more phantoms than flesh and blood, may be suggestive of his guttural approach to the subjects. While the paintings pack an emotional punch, detail and nuance are hard to achieve with a cudgel, and as sociological commentary the paintings lack both. 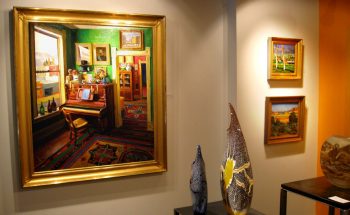 Margreen says response to the show has been mixed. Some of the casual visitors to the gallery have been in and walked right out. “Others who ‘know’ Randall are either thrilled or disappointed,” she says. ” Very little gray area! It’s been a study in human nature on many fronts.”