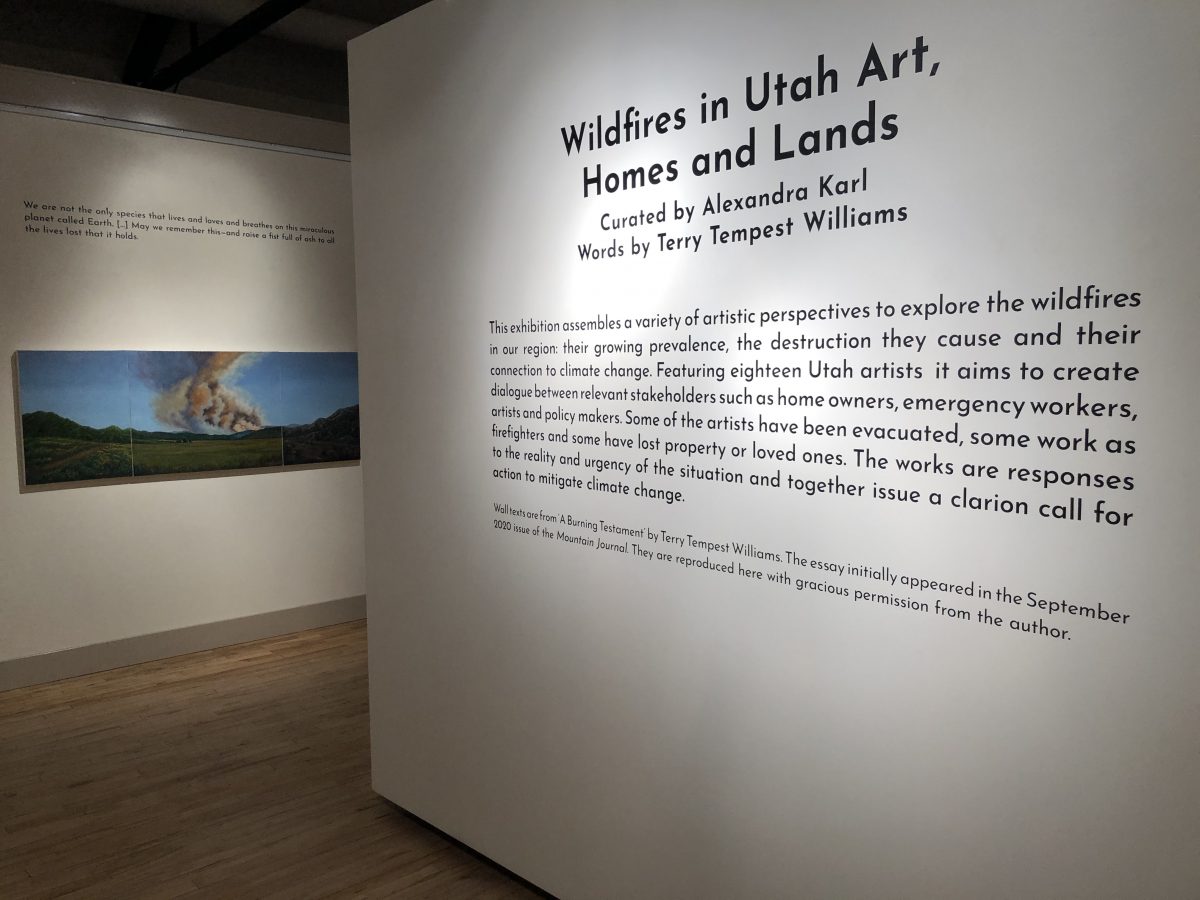 No self-respecting dramatist would set a Biblical Apocalypse in the parking lot of a shopping center; it’s too mundane, too much a whimper and not a bang, to produce the proper sense of doom. Yet today it’s a routine event to carry the groceries out to the car, only to realize that the cloud resting majestically atop the nearby Wasatch Front isn’t a cumulus or a nimbus. Rather, it’s a massive pillar of smoke, such as in Biblical times the chosen people might have followed as it led them to the promised land. But Utah is already supposed to be Zion, and the fact that it is often on fire ought to upset us more than it does. For some reason, the alarms sounding all around us are being ignored. It might be argued that the Covid pandemic is the reason why the environment isn’t getting the attention it deserves. That, or social divisiveness and political stress. But those are transient features, always with us, arguably no more than today’s news waiting to be replaced by tomorrow’s. Extinction, on the other hand, and as it is often said, is forever. Perhaps the answer to this conundrum is that we need a new kind of prophecy. And at the Bountiful-Davis Art Center, eighteen artists are proposing how that prophecy might look.

Some of them, like Lenka Konopasek and Frank McEntire, have long foregrounded catastrophe in their art. Konopasek, in her scenes of fire, tornado, and structural collapse tearing through industrial and residential environments, may have done more than any other landscape artist to take Ansel Adams’ recognition that the world we inhabit, which he pointed out near the end of his life is far more completely manmade than we any longer perceive, and fused it with the philosophical observation that all things that begin must eventually end. In her paintings, and especially in her intricate paper sculptures, the distinction between the evident fragility of all life and the seeming permanence of materials like steel and concrete is dissolved. A tree becomes paper, which gives rise to a civilization, which in turn burns to ash or blows away on the wind. If her subject is an oil well, a source of greenhouse gas and global warming, all the more ironic. It’s another, more realistic cycle of life. 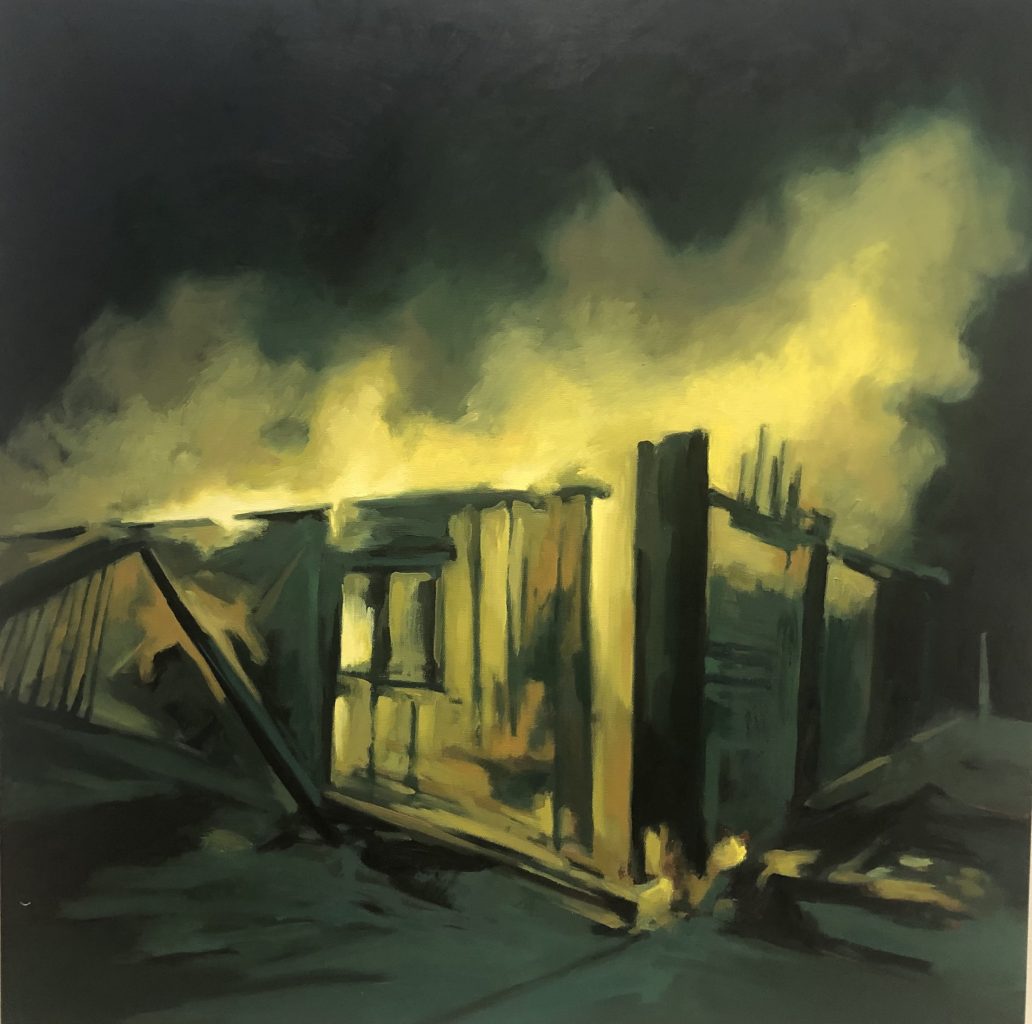 Frank McEntire, whose paints and canvas have been almost entirely replaced by the discarded material goods of our culture, remembers lessons others have forgotten, or never learned. His subject has always been our failure to pay sufficient attention to our own behaviour. In his three works here, he holds up a mirror to a society so sophisticated in its technology that its firemen can survive amidst an inferno, but cannot find a way of living that doesn’t produce ever-larger numbers of such conflagrations. Regardless his focus in the moment, his has seldom been a popular point of view. 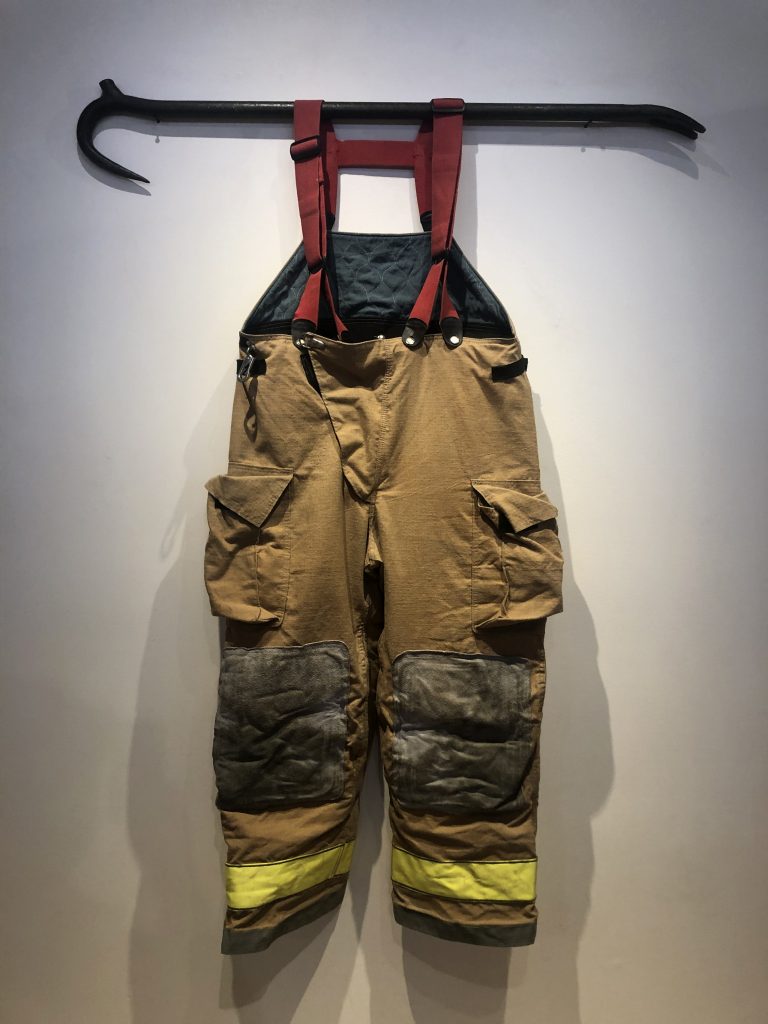 One artist whose painting has warmed with the environment is Jean Arnold. When 15 Bytes first found her, she was riding a bus with her materials, doing her own version of contour drawing, wherein she painted the paved and constructed world as it rotated past her window. As striking and original as her images of the velocity and alien surface of urban life were, they did not showcase the skilled hand and eye behind them. Her landscapes of Malden, Washington after it was 80% leveled by a fire might lead some in the audience to wonder: when a few seconds on Google will bring up countless photos of the devastation, what need is there to paint it? So consider that in spite of trillions of ID photos, we still want hand-crafted portraits by artists who capture what the eye sees, not what a machine distorts. Or given the industrial scale and ferocity of a major fire, some sense of perspective may be restored by a human being’s cognitive and emotional contact with what was, after all, precious to something living. 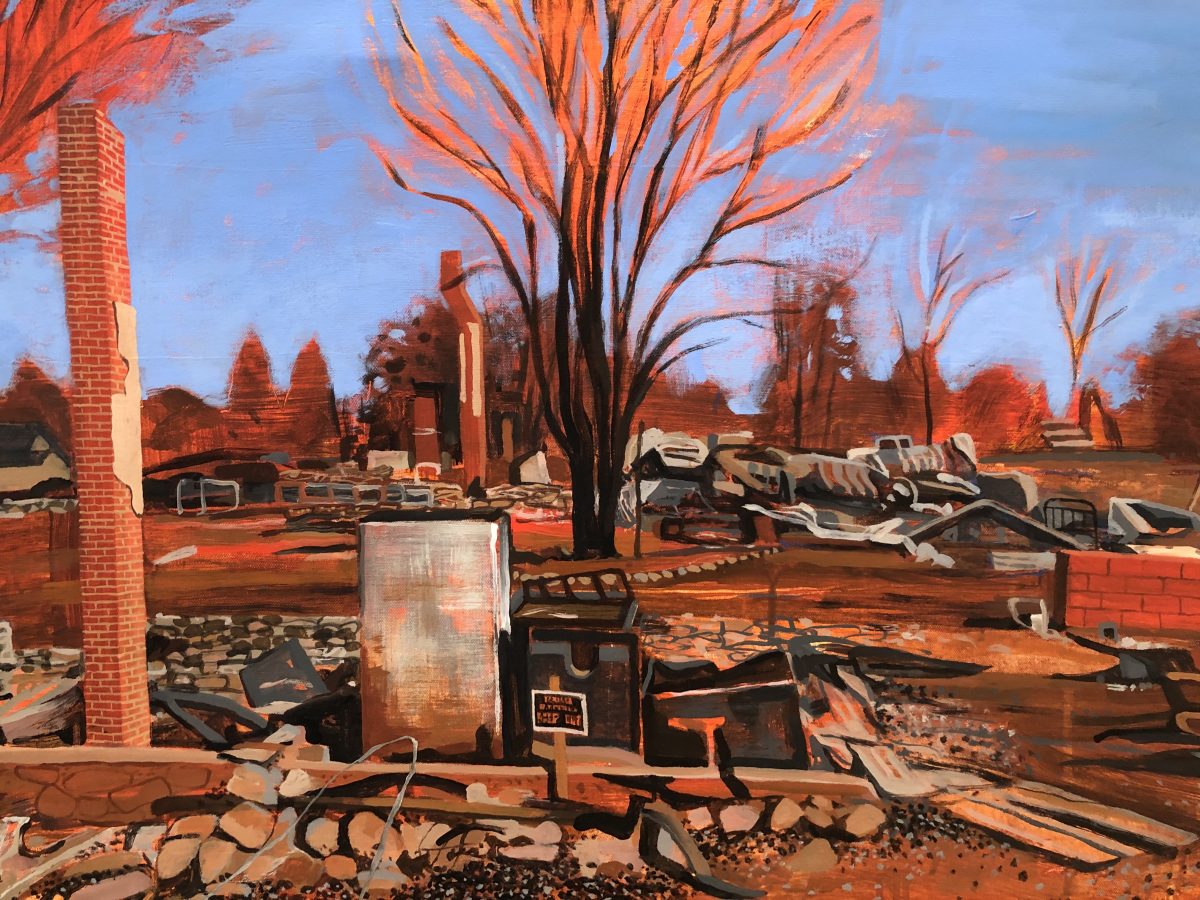 Jean Arnold, “Malden 1: After the Inferno”

Curator Alexandra Karl was moved to assemble this exhibition by an essay from late in 2020, by Terry Tempest Williams, who is a beloved figure, indeed a figurehead, of the Western American community, but who hasn’t always been universally appreciated. In her essay, a small part of which Karl was permitted to reproduce on the gallery walls, Williams departs from her frequent subject, the damage humans have sometimes done to each other, and instead presents a more powerful argument on the injury human activity does every day to nature, to the growing and living things that share this earth with each other, but rarely see us reciprocate their benign contributions.

There’s a yawning divide here: how much does our attention to fire result from human loss, when human presence in the wilderness is several parts of the problem? Many of the artworks attempt to straddle, even to close that gap. Cara Despain’s melted vinyl fence — vinyl being a petroleum product that mocks the forest where it was so employed — sits on a fence of its own making: do we mourn those whose homes burned, or the creatures who lost their homes to the unending human invasion? 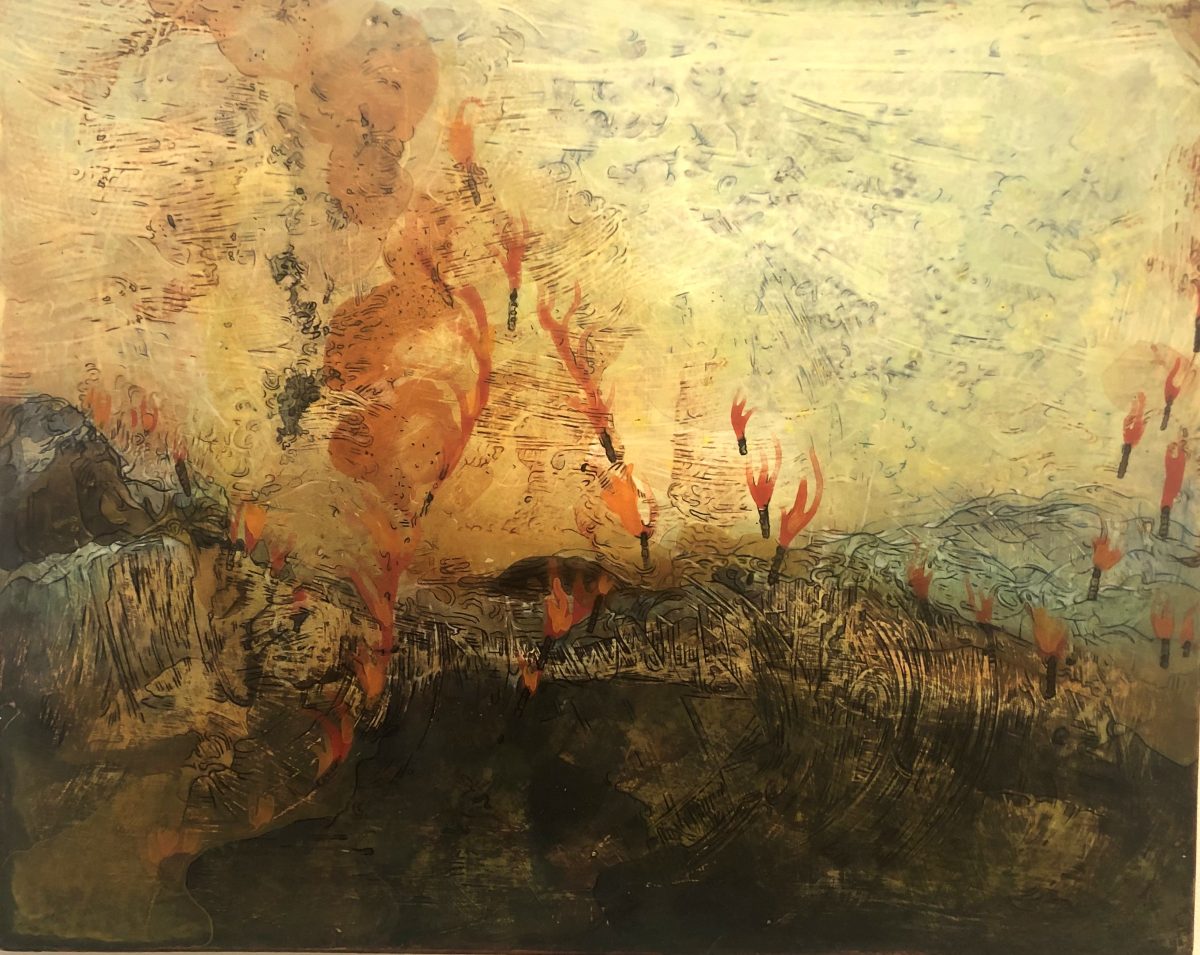 Then there’s Sandy Brunvand’s recent journalistic turn in a career that has always made strong graphic statements. A news report, such as “Utah’s second largest wildfire will keep burning in the Uintahs for weeks,” catches her attention. She types it on a piece of paper that she then develops with marks drawn from her infinite catalog of elaborations. In essence, the stimulus that initiated her work becomes the caption that guides the viewer’s understanding. John Erickson’s rapid, sketch-like works on paper also feel like reporting from the scene, capturing the haste to escape and the panic that drives it. Maureen O’Hara Ure, whose playful, elaborately mixed media narratives often achieve a kind of folkloric, even mythological quality, plays here with the way folktales may skirt the boundary between innocence and horror. At the center of “Fire On The Mountain,” an array of images suggested by its title, Scott Abbott places a single, anguished deer print on a ground buried in ashes.

The largest number of works, and the widest variety of techniques, are provided by Annastasha Larsen, who experiments with her media at will. In her most nearly conventional canvas, “The Way of Holiness,” a single perspective is divided into a triptych. In the left wing, green mountainsides backstop a carpet of Spring flowers. On the right, the valley’s other side lies blackened by fire, the blossoms replaced by glowing coals. In the center, the pyre of smoke from the fire connecting past and future spirals through the sky, coming after the viewer. Elsewhere, Larsen shows between a dozen and twenty small, square gems — depending on how one counts them. Some are done in traditional media, the spectacle of wildfires shown from a variety of perspectives, but perhaps the most compelling are kiln-fired ceramics, which share an origin with the blue Majollica-ware pieces salvaged from a wildfire and presented like a table setting in “[That Troublesome Fire],” a text with photos by Andi Pitcher Davis. Where Larsen’s artworks, like so much of the work assembled here, are specifically about fire, Davis begins the work of generalizing, surrounding her photos with a context, a story that could as well describe a Covid loss, or any other disorienting funeral. 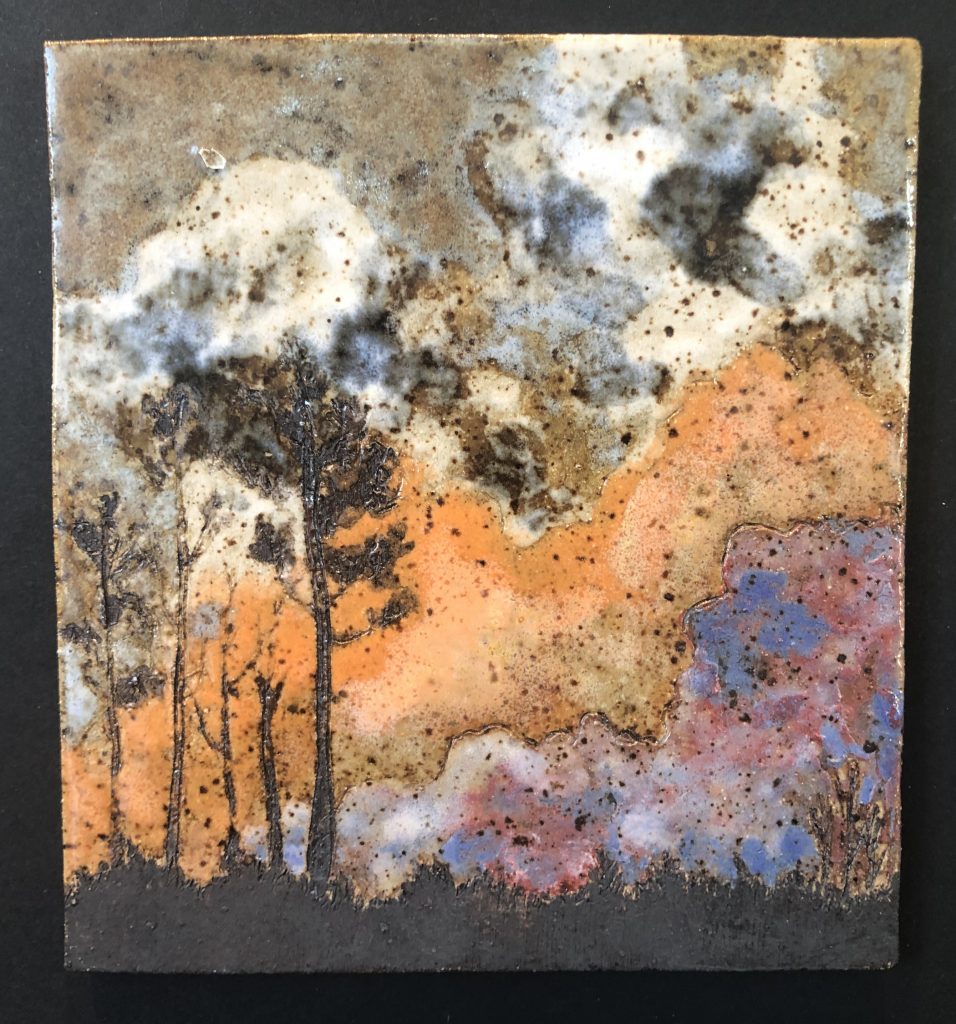 There are surprises here, and a thing or two that could have been predicted. Both Hadley Rampton and Connie Borup present unexpected scenes of natural devastation, which in Rampton’s case especially calls attention to a previously un-remarked quality of her art: the sense of fragility that accompanies her idealization of nature, with its fragile perfection. Borup’s “Yellowstone Fire,” on the other hand, suggests the rightness of natural processes, even destructive ones, and the indifference of nature to merely human designs.

Individual approaches aid in the labor of taking in 18 artists and more than 40 works. The draftsmanship in Ron Linn’s “Anthropocene Record” demonstrate that there are no such things as objective drawings. Likewise Andrea Jensen’s recombination of the DNA of 20th-century art, recapitulating cubism, surrealism, expressionism, and the breaking of the ban on drawing only what is seen, never what is known. Peter Everett and Nancy Andruk-Olson engage highly personal symbols in response to what has been largely seen as a call for universal appeals. 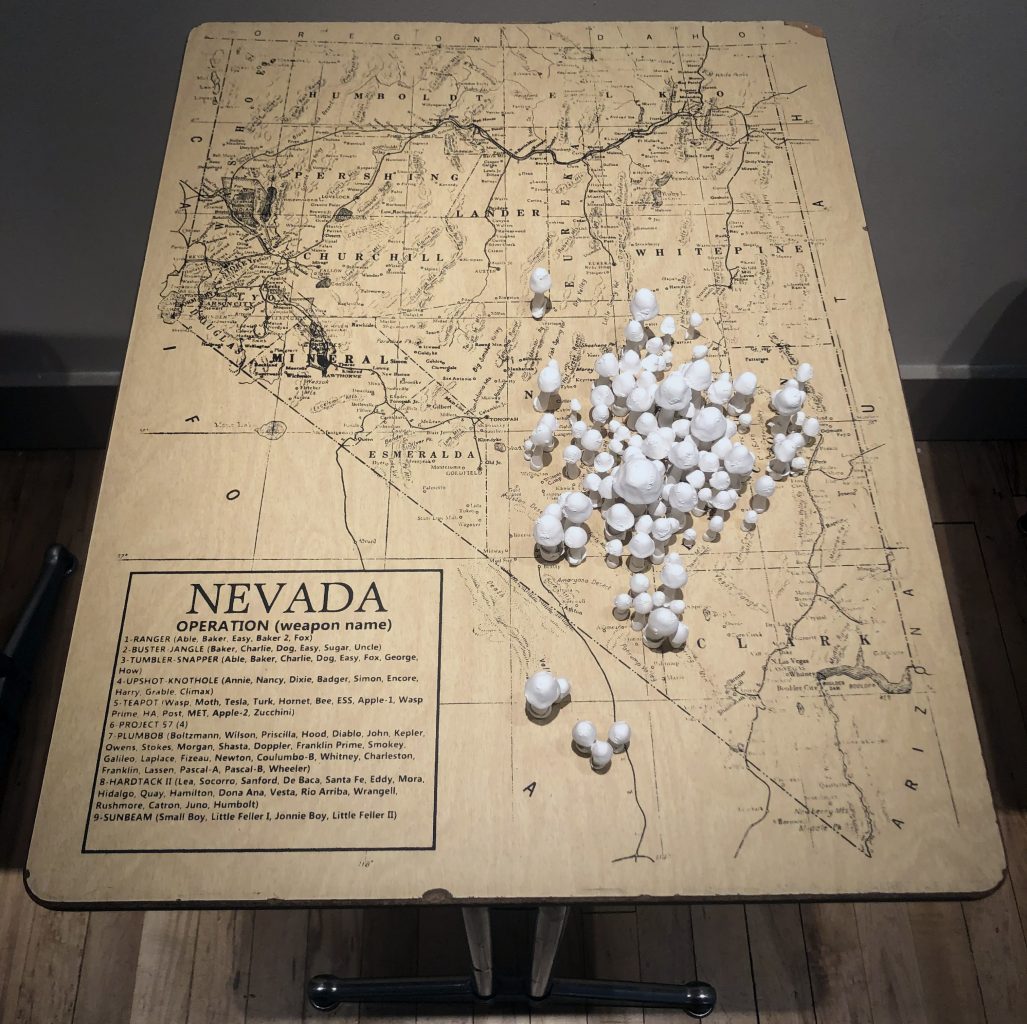 There is, of course, plenty of room in environmental awareness for individual perspectives. I am old enough to remember hiding under my grade school desk, a flimsy contraption not credibly equal to the task of defending my classmates from the hottest fire there is: the thermonuclear explosion of a hydrogen bomb, its fusion being the source of every star’s heat, including our sun’s. I was reminded of those long ago days, apocalyptic to us then, but seeming innocent now, by Alison Neville’s trio of M.A.D. school desks, each engraved with a map of an erstwhile island paradise and each suffering an invasion of tiny mushrooms, their look of having grown on the desk vying in the mind with their resemblance to the doomsday clouds of the holocaust we were threatened with once upon a time. Neville is a favorite: an artist who, like Frank McEntire, repurposes castoff items such as games and toys and uses them to recall to mind the endless ingenuity of human destruction. Here, her earlier invocations of how our toys teach us to imagine and thus encompass war’s violence bear fruit: appropriately, in the fruiting bodies of organisms that spread underground, in the dark.

There is one artist here who fights fires literally: Kylie Millward calls herself a Wildland Firefighter, even while objecting to her government employer’s calling her a “Forestry Technician.” Her poster-like illustration of the meals provided to her and her coworkers recalls the popular deconstruction of advertising images widely published a few years ago. Alongside a cup of “Chlorine Coffee” runs a note pointing out that the cup is styrofoam. Moving around the meal one soon sees how the manufactured products it displays close the circle: highly refined food in fossil fuel-derived containers add to global warming, increasing the number and intensity of wilderness fires, requiring more firefighters to be fed. 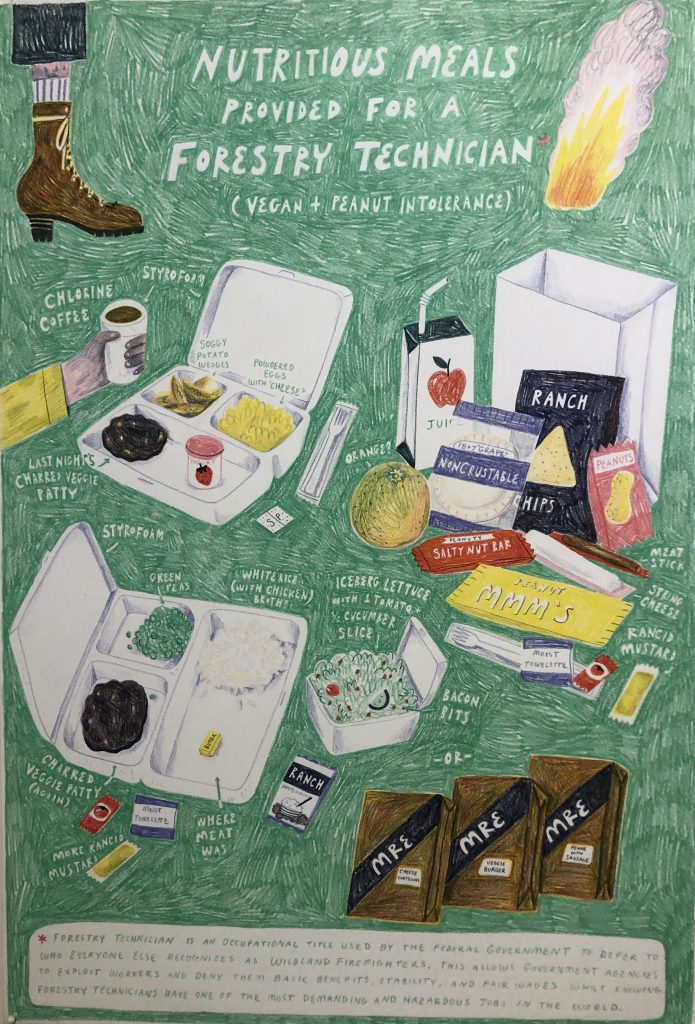 The New York Times art critic Hilton Kramer wrote that American radicalism produced “not an intellectual tradition that illuminates current problems but a collection of case histories.” Today, fashion and the need to be unique divide artists, while new trends have begun to unite them. America’s has always been cursed by individualism, when what we need is fewer fiercely personal statements and in their place, a movement that illuminates our environmental challenges. We can hope that views like those taking shape here at Bountiful Davis Art Center will change minds, rather than provide an escape from a looming disaster already too close, already moving too fast. 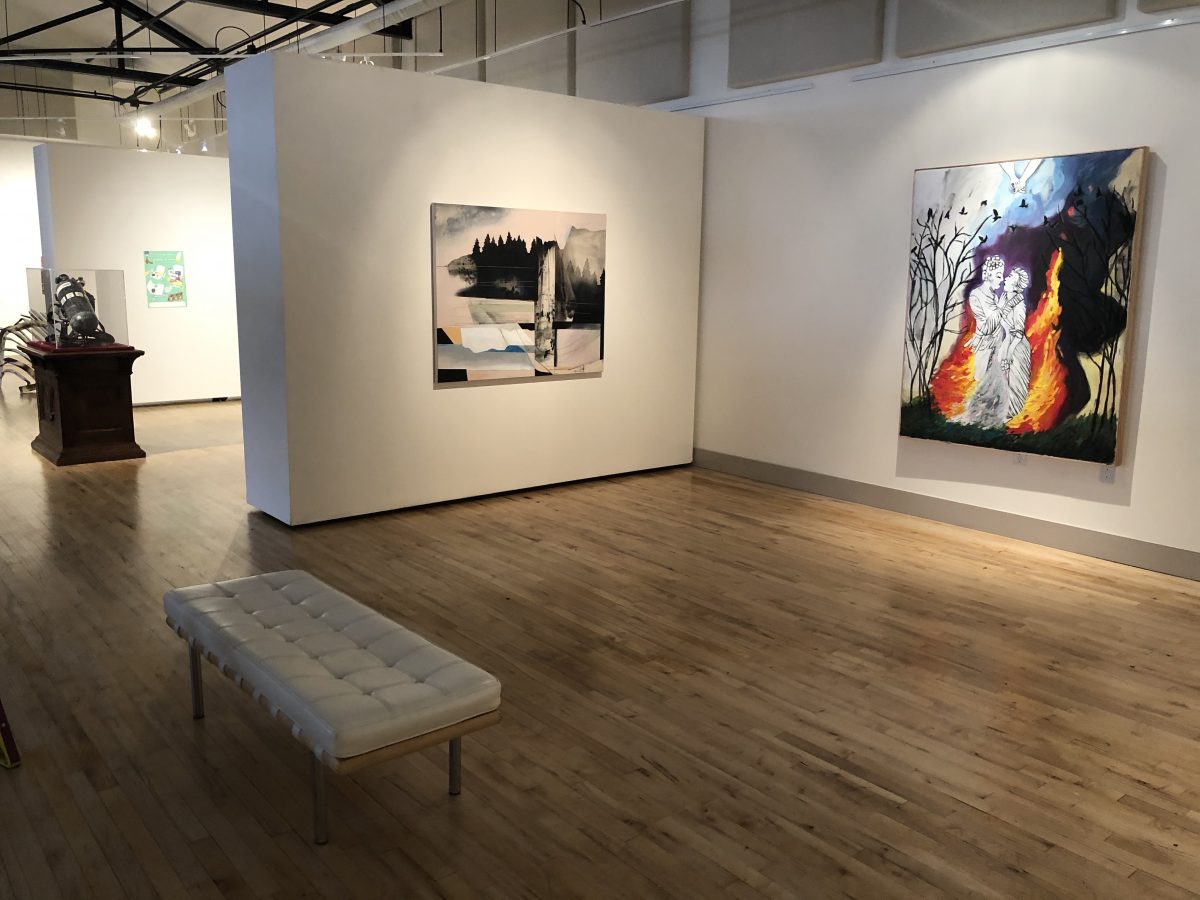