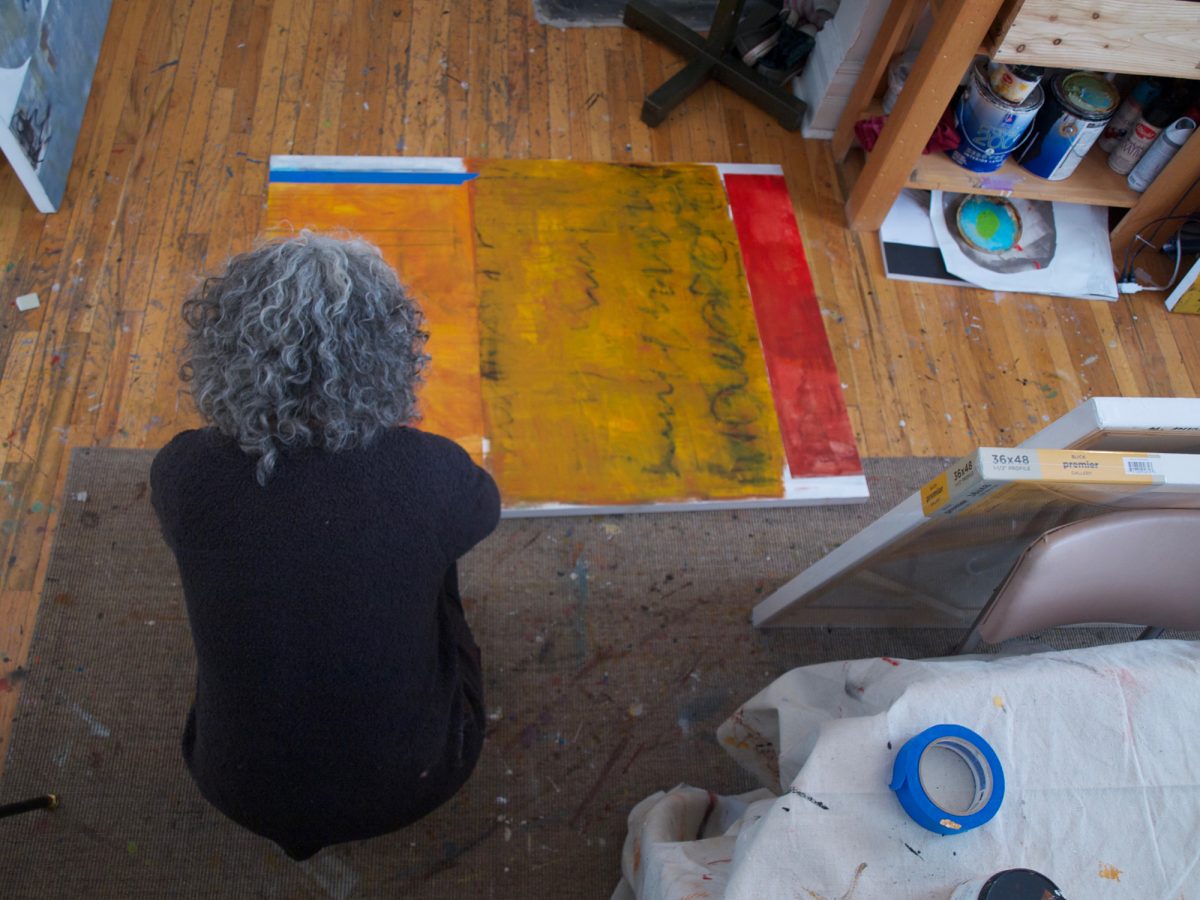 With Randee Levine it is hard to tell what comes first, philosophy or art. Levine’s art is an extension of herself, a physical manifestation of the psychological process and understanding that has brought meaning and awareness to her personal life, and has become central to her professional life as well. In an exhibit that opens this month at Phillips’ Dibble Gallery, Levine is showing more than 10 major works in which she reaches a congruence of psychological being and artistic form infused with expressive process.

Levine grew up in the Bronx and Yonkers, the child of first- generation parents from a Jewish Russian background. She studied fine art at State University of New York at Purchase, followed by the standard struggling artist stint in NYC: she waited tables, sang in bands and did visual research for designers. She also met Tully Cathey, a musician who had ties to Utah. “We decided we didn’t want to stay in New York; he had some connections here because his parents were ‘transplants.’  We decided to move here, it was great here, and developing the connections, and the gigs that I got,” she says.

In the mid-1980s the couple had a brief stint in Los Angeles, where Levine worked at celebrity photography, but ultimately they returned to Salt Lake City. She realized she does better in a more relaxed environment. “Coming back from LA and going to a therapist here for my own personal needs, I discovered something called ‘process oriented psychology.’  This affects both personally and professionally the way I view the world and my life.” Describing herself as a “facilitator and teacher of Process Work,” that was founded by Dr. Arnold Mindell, she says she uses the practice to work professionally with individuals as well as to consult with organizations. And with colleague Jan Dworkin, from Portland, Oregon, she founded a business called 361ArtWorks, to use Process Work and the arts “to facilitate conflict resolution and organizational change.”

“Process Work is not traditional psychology, it has a strong Eastern Asian philosophical bent; it draws out of Jungian psychology,” she explains.  “The whole idea is that it’s potential oriented, that everything we experience that is troubling or disturbing has the seed for potential growth. I like to make a distinction between New Age thinking and Process Work.  We don’t invite things into our lives but face those disturbances.  For example, if you are depressed, we don’t prescribe something for depression, we discover the meaningfulness of that depression and doing that often relieves the symptom.  Things manifest as disturbances, but if we can become congruent with these things, they flow more easily,” she says concertedly.

This approach to life carries over into Levine’s art. The artist works out of a studio in her house in Salt Lake City’s Marmalade district, a home she shares with her partner Christopher Brunelli, a songwriter and musician (she and Cathey have since divorced), and his son Dante. Her works are colorful and expressive, delving into both abstraction and introspective figurative work.

“I think that showing things that aren’t always exposed is part of my psychology and who I am,” she says of her art. “I tend to be an expressive and authentic person who shows things that others might be shyer about, something that might be reflected.  This is getting along with what is actually and not trying to cover things up and make them different.”

Levine’s standard, medium-scale canvases are the kind that exude a symbolic intensity. Color, shape and scale all relate in powerful formal ways, to create works with a meaningful presence that engage the viewer and encourage a search for understanding. For example, in “Josie with Me,” the prominent yet simplified figure is both specific—a portrait of the artist, her curly hair evident, and her pet dog—and a more general symbol of female gender, the gestural breasts, prominently high just below the neck, seen as cones protruding—definitive, provocative symbols that may confront personal symbolic meanings and powerful metaphors.

In 1945, Jackson Pollock (who underwent Jungian psychotherapy during 1938-42) painted a series of “Totem” paintings, semi-figural works that find a strong parallel in Levine’s work. Pollock had a long-running interest with Surrealism, and the abundance of meaning that can be read on a subconscious level, with parts to the whole and emphasis given from part to part with symbolic awareness.  This is very much like the work of Levine, whose painting is based on process and the processing that renders totem-like figures.

“I am connected with dreaming and what’s inside,” says Levine.  The environmental phenomena of personal psychology and the coming together of Levine’s art are achieved, so says Levine, “in the subconscious.” In “Portia with Red Hair,” the dream is rendered in a Frieda Kahlo-like manner, expressing a visceral awareness of the core of self and not being afraid to look deeply within and confront what’s there. There is a structural flatness here that unifies while projecting core inner elements. “Portia with Red Hair” has a very widened head with eyes rendered as hypnotic. Two cone-like projected breasts are placed just below the neck, the childlike rendered arms are bowed, the feet are heavy.  At her core is a visceral representation, the abstraction of her inner core.  The colors are bright, but shown as a compendium that seems to have no rhyme or reason.

Levine’s work has not always taken the form of these figural abstractions, but rather concentrated on total abstraction.  This other work functions in much the same way, however, with meanings that evolve from symbol and structure.  “Red and green abstract” is one such example, possessing totem symbolism, layering from top to the bottom strata, with an irrational element in the heaviness at the top and a looser application towards the bottom layer.  This pressure, with scribbles and blending through each layer, causes a different dream-state.  “Black and red abstract” functions in the same manner, with the top tier far more intense than the bottom and sketchiness of hue creating a psychological, irrational response, thus sensitizing or desensitizing by the effect of the linearity.

These charged works are a study, of sorts, of what is personified, what is portrayed, and who, what, where, when, why and how the response is projected—the purpose of process, the movement of self, the movement of spirit, a moving of mind, and ultimately the courage in processing this psychological and personal journey.  Ultimately, an expressiveness of Levine’s putting her own art “out there” is facing her own life, mistakes, misfortune, arming herself and the viewer; projecting blindness with color and personal connectivity with the unknown. 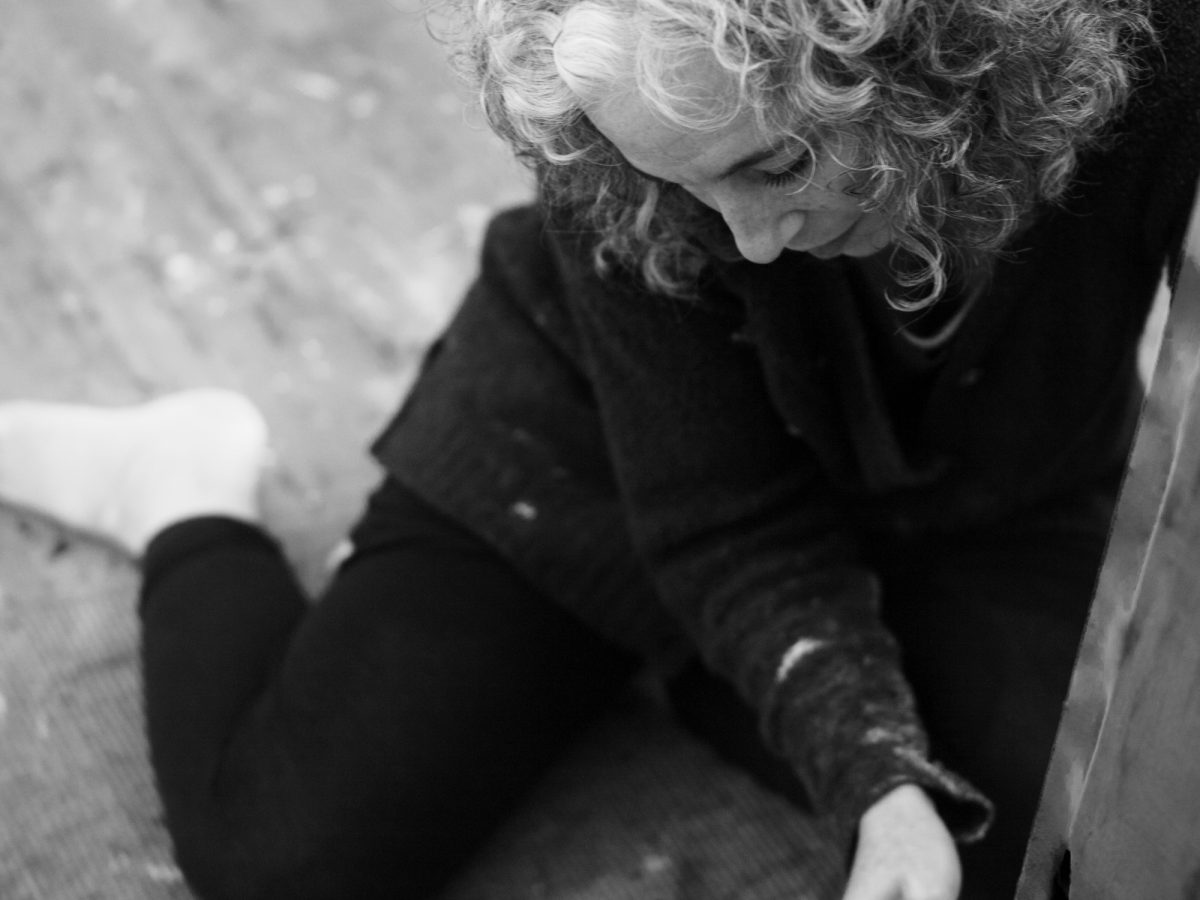