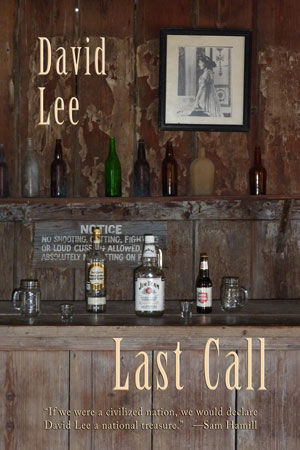 David Lee will be reading and discussing his work, including the book reviewed below, at four different sites in Utah during October as part of the Utah Humanities Book Festival: 10/8 at the SLC Public Library (4th floor) in partnership with City Arts (with poet Gailmarie Pahmeier); 10/9 Snow College Convocation Series, 12:30 pm, 150 College Ave. East in Ephraim; 10/10 Kiva Koffeehouse, at 6 pm, mile marker 7386 in Escalante; 10/10-13 with Craig Childs at the Cliff Notes Writing Conference in Boulder.

David Lee’s latest collection of poetry, Last Call (WingsPress, 2014), is a natural and honest pleasure to read. It is like an afternoon at an old watering hole with your buddies elbowed up all along the whiskey-stained oak, heels hooked in the bar foot rest, and the former poet laureate of Utah, Mr. Lee himself, serving up the day’s oratory libations.

Last Call is a eulogy to Lee’s colleague in verse, and late friend, Bill Kloefkorn. The poems also tell a sweeping story set in Garza County, Texas, that revolves around “The Monument to the South Plains.” The monument is young Willy John’s “indigenous sculpture.”

…a tower amalgamated between an obelisk

and a Babel ziggurat, a spiral of plough shares

a corn planter, spring tooth harrow and a flat cultivator

Lee’s Garza County, not in the heart of Texas but surely positioned in an important organ–say the spleen?–is populated with characters divers and appealing. Their language is simple and colloquial, roughshod and earthen–“Texanese.” Two retired professors, Billy Klogphorne and Clovis Ledbitter hold court through most of the poems with their bickering and erudition.

That, sir, being a highly commendable votive castureation worthy of one PBR

Which I accept with honor

Let us go then you and I

while the evening spreads against the sky

I, sir, am not an alcoholic

I am a votive casturationist drunk

Perhaps you do know Jack Shit

and in that light

I, sir, will be your Sancho Panza

You can sense that Lee has sat there in Garza County and just listened. Listened in the bars and the town council meetings and the cafes. He’s hunkered down in the buffalo grass at the ends of county roads and in the gravel of the school playground. There is a rhythm in these poems, a solemn plains note lifted with rumba.

Miles slouched over my tiny mind

because I’m driving all alone

A few folks come and behold Willy John’s statue, to stand around it, ponder, and pontificate. Then la Bruja, “Eva Saenz Mendietta the Seer” sees a face half way up and states: “Veo la cara de la Virgen and all were sore amazed”. She whispers to Willy John’s father, “Cuidado, novio, if this gets out / it will no longer be a sculpture or monument / it will become a shrine. ?listo para eso?”

And so they do come, “the paisanos…by the pickup truckloads …until Willy John’s father”

had to build and plumb toilet facilities

then the word spread to the gringos

who came in station wagons in order to make damn sure

I read straight through this collection. Then turned right back to the first page and started over. As with most poetry, second readings reveal new insight, different shadings, like driving over old highways from Twin Falls, Idaho, say, down to Garza County, and then turning back around to see it all from a different perspective. Clovis makes that first leg of the drive in the poem titled “Driving Solo: Clovis Rants A Monologue in Five Acts with Intermission” as well as in “Interlude at McDonalds in Ely, Nevada, drinking coffee after filling up my truck with stagecoach-robbery priced diesel ten point two m.p.g.”

proving Lamech and polygamy were of the lineage of

Cain and therefore accrsed of God

Why he was never invited back

The “Why” is partly because:

isn’t it adultery? and isn’t adultery a sin?

that is a wholly different topic

There is that, and there is also the story elucidated to the Sunday school children about Brother Klogphorne’s stob that when invoked keeps his pants up. A story best kept to the imagination or to those so inclined to search out Mr. Lee’s book to ferret out the finer details of why he was never invited back to teach Sunday School.

Okay lay it on its side and turn it upside down

standing up so wegn get to the wheel

now you take a pair of pliars and a monkeyranch

loosen it up to where the wheel comes off

So begins a lesson on fixing a flat tire on a bicycle meted out by Johnny Bert Ezell in his filling station “At the Sign of the Flying Red Horse” on a slow afternoon to young Monroe Newberry whose no-account father hasn’t taken the time to teach his boy some of the more useful parts of life. Johnny Bert Ezell knows how to fix a flat tire. And he knows how to fix a car: you start with the easy stuff:

when a car won’t start

the first thing I’d do was check the fuel gauge

it’s probley out of gas and that’s your problem

Too bad the car that wouldn’t start was not the reason Lucy Beth was there to see ol’ Elder Ezell. She did (as I did!) get a fine tutorial on troubleshooting a dead car…but nothing on what to do with a wayward husband.

Details. “now bend down over the fender for a sightline / and click the ignition one bump at a time / till the points come all the way open”.

Details. “Yougn lean over and examine the carburetor when the housing lid’s off”.

Hope. “I’ll bet two dollars to a doughnut / wegn get her done one way or anothern”.

These poems tell a story in sun-struck verse that is irreverent, ribald, and elegant. Words in the vernacular like “oncet” and “twicet” and “wegn” pepper the lines and flavor the world of Garza County. But in the poem “Last Call,” Lee lets us not forget in the end that life is short and good honest friendship and admiration for lost friends can inspire verse that hums with perfect pleasure like a prairie wind through taut-strung bailing wire in the upper most reaches of a Monument to the South Plains.

And you my friend

whom the gods call

into that other alone

be it desert or forest

strike a small fire which

will flicker beyond forever

I will find you

sooner than later wherever

you wait in the darkness

We will sing together

delirious and off key

We will tell great lies

to shame the heavens

We will cook with wine

I promise you this 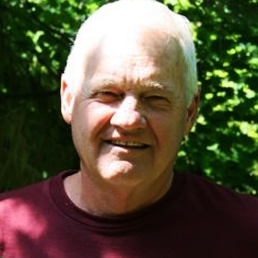 David Lee was raised in Post, Texas, a background he has never completely escaped, despite his varied experiences as a seminary student, a boxer and semi-pro baseball player (the only white player to ever play for the Negro League Post Texas Blue Stars) known for his knuckleball, a hog farmer, and a decorated Army veteran. Along the way he earned a Ph.D., taught at various universities, and recently retired as the Chairman of the Department of Language and Literature at Southern Utah University. After 30 years in Utah, Lee and his wife Jan relocated to Bandera, Texas. Lee was named Utah’s first Poet Laureate in 1997, and has received both the Mountains & Plains Booksellers Award in Poetry and the Western States Book Award in Poetry. Lee received the Utah Governor’s Award for lifetime achievement and was listed among Utah’s top twelve writers of all time by the Utah Endowment for the Humanities. He is the author of fifteen books of poetry. In 2004, So Quietly the Earth was selected for the New York Public Library’s annual “Books to Remember” list. Read an interview with David Lee in the [Bandera Courier]